How Cells Know Which Way to Go 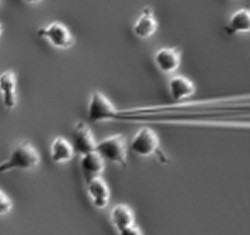 Caption: A snapshot from a video showing lab-grown human leukemia cells moving toward a needle tip releasing a chemical attractant.

Newswise — Amoebas aren’t the only cells that crawl: Movement is crucial to development, wound healing and immune response in animals, not to mention cancer metastasis. In two new studies from Johns Hopkins, researchers answer long-standing questions about how complex cells sense the chemical trails that show them where to go — and the role of cells’ internal “skeleton” in responding to those cues.

Working with Pablo Iglesias, Ph.D., a professor of electrical and computer engineering at Johns Hopkins, Devreotes’ research group members Chuan-Hsiang Huang, Ph.D., a research associate, and postdoctoral fellow Ming Tang, Ph.D., devised a system for watching the response of a cellular control center that directs movement. They then subjected amoebas and human white blood cells to various gradients and analyzed what happened.

“Detecting gradients turns out to be a two-step process,” says Huang. “First, the cell tunes out the background noise, and the side of the cell that is getting less of the chemical signal just stops responding to it. Then, the control center inside the cell ramps up its response to the message it’s getting from the other side of the cell and starts the cell moving toward that signal.” The results appear on the Nature Communications website on Oct. 27.

But to get going, the cell has to have first arranged its innards so that it’s not just a uniform blob but has a distinct front and back, according to another study from Devreotes’ group. In that work, visiting scientist Mingjie Wang, Ph.D., and postdoctoral fellow Yulia Artemenko, Ph.D., tested the role of so-called polarity — differences in sensitivity to chemicals between the front and back of a cell — in responding to a gradient. “In previous studies, researchers added a drug that totally dismantled the cells’ skeleton and therefore eliminated movement. They found that these cells had also lost polarity,” Artemenko says. “We wanted to know whether polarity depended on movement and how polarity itself — independent of the ability to move — helped to detect gradients.”

The team used a pharmaceutical cocktail that, rather than dismantling the cells’ skeleton, froze it in place. Then, as in Huang’s experiments, they watched the response of the cellular control center to chemical gradients. “Even though the cells couldn’t remodel their skeleton in order to move, they did pick up signals from the gradients, and the response to the gradient was influenced by the frozen skeleton,” Artemenko says. “This doesn’t happen if the skeleton is completely gone, so now we know that the skeleton itself, not its ability to remodel, influences the detection of gradients.” The results appear in the Nov. 6 issue of Cell Reports.

By fleshing out the details of how cells move, the results may ultimately shed light on the many crucial processes that depend on such movement, including development, immune response, wound healing and organ regeneration, and may provide ways to battle cancer metastasis.

Other authors on the Cell Reports paper are Wenjie Cai and Pablo Iglesias of The Johns Hopkins University. The study was funded by the National Institute of General Medical Sciences (grant numbers GM28007 and GM34933) and the National Natural Science Foundation of China (grant numbers 81000045 and 81000939).

Other authors on the Nature Communications paper are Mingjie Wang and Changji Shi of The Johns Hopkins University. The work was supported by the National Institute of General Medical Sciences (grant numbers GM28007, GM34933 and GM71920) and a Harold L. Plotnick Fellowship from the Damon Runyon Cancer Research Foundation.