How Micro-Circuits in the Brain Regulate Fear 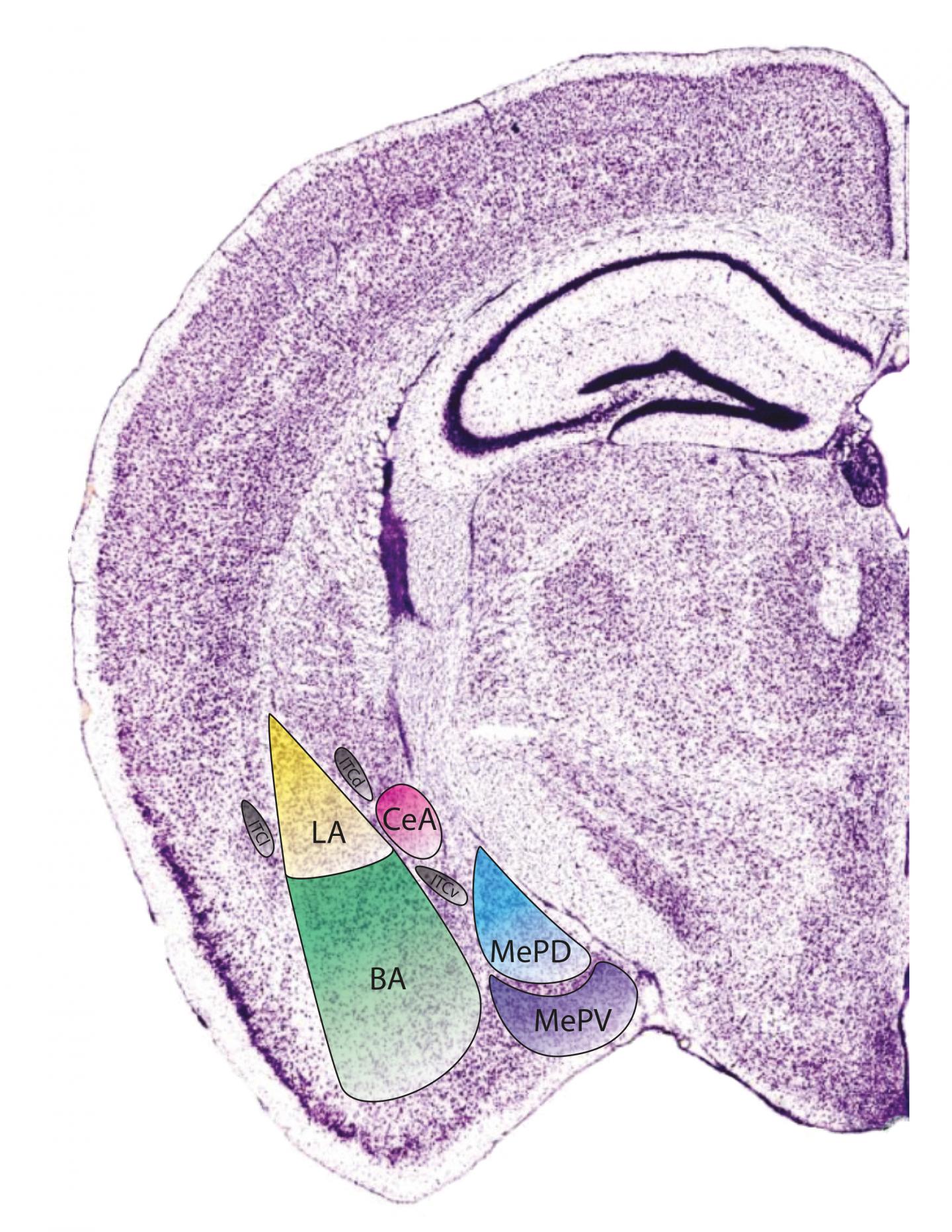 Subdivision of the mouse amygdala. The cell types studied are located in the central amygdala (red). 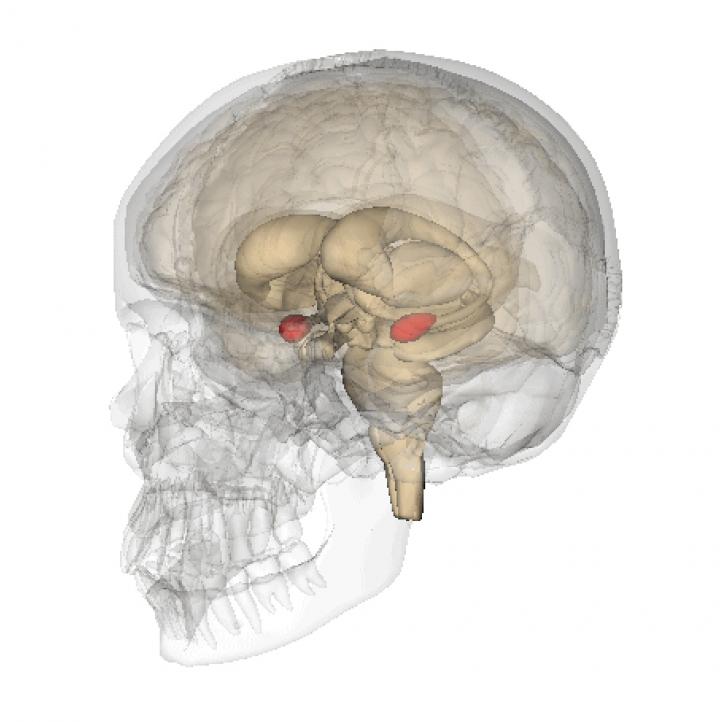 The amygdala is one of two almond-shaped clusters of nuclei located in the center of the brain and is part of the limbic system.

Newswise — Fear is an important reaction that warns and protects us from danger. But when fear responses are out of control, this can lead to persistent fears and anxiety disorders. In Europe, about 15 percent of the population is affected by anxiety disorders. Existing therapies remain largely unspecific or are not generally effective, because the detailed neurobiological understanding of these disorders is lacking.

What was known so far is that distinct nerve cells interact together to regulate fear responses by promoting or suppressing them. Different circuits of nerve cells are involved in this process. A kind of "tug-of-war" takes place, with one brain circuit "winning" and overriding the other, depending on the context. If this system is disturbed, for example if fear reactions are no longer suppressed, this can lead to anxiety disorders.

Recent studies have shown that certain groups of neurons in the amygdala are crucial for the regulation of fear responses. The amygdala is a small almond-shaped brain structure in the center of the brain that receives information about fearful stimuli and transmits it to other brain regions to generate fear responses. This causes the body to release stress hormones, change heart rate or trigger fight, flight or freezing responses.

Now, a group led by Professors Stephane Ciocchi of the University of Bern and Andreas Luthi of the Friedrich Miescher Institute in Basel has discovered that the amygdala plays a much more active role in these processes than previously thought: Not only is the central amygdala a "hub" to generate fear responses, but it contains neuronal microcircuits that regulate the suppression of fear responses. In animal models, it has been shown that inhibition of these microcircuits leads to long-lasting fear behaviour. However, when they are activated, behaviour returns to normal despite previous fear responses. This shows that neurons in the central amygdala are highly adaptive and essential for suppressing fear. These results were published in the journal Nature Communications.

The researchers led by Stephane Ciocchi and Andreas Luthi studied the activity of neurons of the central amygdala in mice during the suppression of fear responses. They were able to identify different cell types that influence the animals' behaviour. For their study, the researchers used several methods, including a technique called optogenetics with which they could precisely shut down - with pulses of light - the activity of an identified neuronal population within the central amygdala that produces a specific enzyme. This impaired the suppression of fear responses, whereupon animals became excessively fearful. "We were surprised how strongly our targeted intervention in specific cell types of the central amygdala affected fear responses," says Ciocchi, Assistant Professor at the Institute of Physiology, University of Bern. "The optogenetic silencing of these specific neurons completely abolished the suppression of fear and provoked a state of pathological fear."

In humans, dysfunction of this system, including deficient plasticity in the nerve cells of the central amygdala described here, could contribute to the impaired suppression of fear memories reported in patients with anxiety and trauma-related disorders. A better understanding of these processes will help develop more specific therapies for these disorders. "However, further studies are necessary to investigate whether discoveries obtained in simple animal models can be extrapolated to human anxiety disorders", Ciocchi adds.

Neuronal diversity is a hallmark of cortical networks. In the hippocampus, distinct neuronal cell-types interact together by selective synaptic contacts and neural activity patterns. We investigate how different forms of emotional and cognitive behaviours emerge within intricate neuronal circuits of the ventral CA1 hippocampus, a brain region instrumental for context-specific emotional memories, anxiety and goal-directed actions. We hypothesize that distinct behavioural programs are implemented by the selective recruitment of micro- and large-scale neural circuits of the ventral CA1 hippocampus. To identify these circuit motifs, we are combining single-unit recordings of ventral CA1 GABAergic interneurons and projection neurons, selective optogenetic strategies, cell-type specific viral tracing and behavioural paradigms in rodents. The results of our experimental approaches will determine fundamental neural computations underlying learning and memory within higher cortical brain regions.

Caption: Subdivision of the mouse amygdala. The cell types studied are located in the central amygdala (red).

Caption: The amygdala is one of two almond-shaped clusters of nuclei located in the center of the brain and is part of the limbic system.