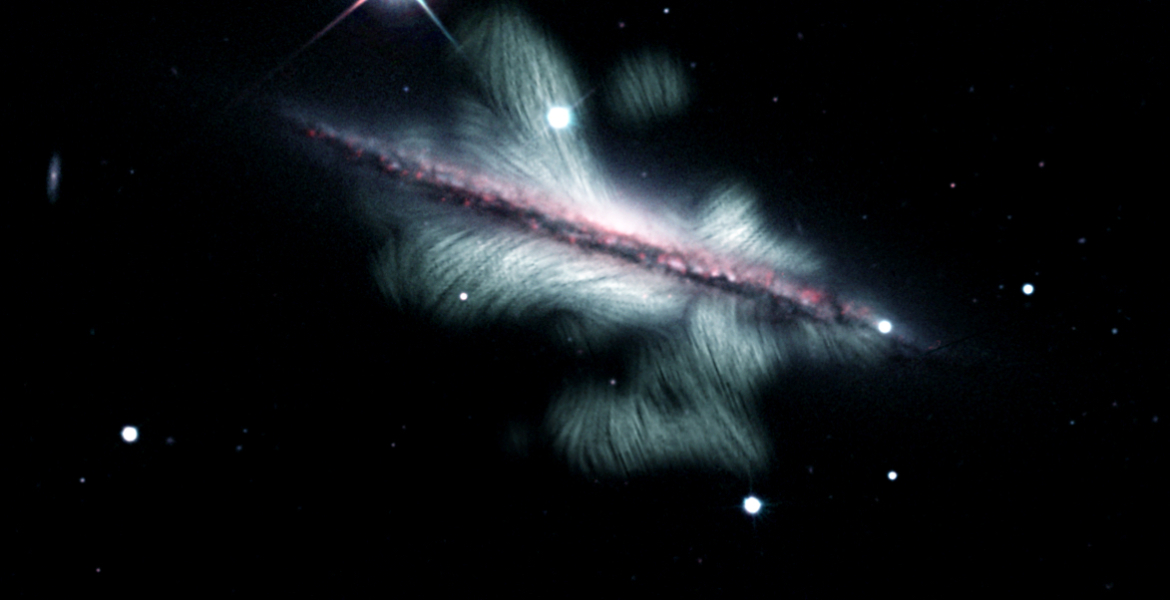 Radio/Optical composite image of the edge-on spiral galaxy NGC 4217. Magnetic field lines (green), revealed by the VLA, extend far above and below the plane of the galaxy.

Newswise — This image shows the huge extent of a spiral galaxy's magnetic field. The galaxy NGC 4217 is a star-forming, spiral galaxy, similar to our own Milky Way, 67 million light-years from Earth in the constellation Ursa Major. The galaxy is seen edge-on in a visible-light image from the Sloan Digital Sky Survey and Kitt Peak National Observatory, and the magnetic field lines, shown as green, are revealed by the National Science Foundation's Karl G. Jansky Very Large Array (VLA) radio telescope.

The magnetic field lines extend as much as 22,500 light-years beyond the galaxy's disk. Scientists know that magnetic fields play an important role in many processes, such as star formation, within galaxies. However, it is not fully understood how such huge magnetic fields are generated and maintained. A leading explanation, called the dynamo theory, suggests that magnetic fields are generated by the motion of plasma within the galaxy's disk. Ideas about the cause of the kinds of large vertical extensions seen in this image are more speculative, and astronomers hope that further observations and more analysis will answer some of the outstanding questions.

“This image clearly shows that when we think of galaxies like the Milky Way, we should not forget that they have galaxy-wide magnetic fields,” said Yelena Stein, of the Centre de Données astronomiques de Strasbourg, leader of the study.

The scientists who produced the image are reporting their results in the journal Astronomy & Astrophysics.

CREDIT: Composite image by Yelena Stein of the Centre de Données astronomiques de Strasbourg (CDS) with the support of Jayanne English (University of Manitoba). VLA radio data from Yelena Stein and Ralf-Juergen Dettmar (Ruhr University Bochum). The observations are part of the project Continuum HAlos in Nearby Galaxies -- an EVLA Survey (CHANG-ES) led by Judith Irwin (Queen’s University, Canada). The optical data are from the Sloan Digital Sky Survey (www.sdss.org). The ionized hydrogen data (red) are from the 0.9m telescope of the Kitt Peak National Observatory, collected by Richard J. Rand of the University of New Mexico. The software code for tracing the magnetic field lines was adapted by Y. Stein from Linear Integral Convolution code provided by Arpad Miskolczi of Ruhr University Bochum.