16-Sep-2019 9:00 AM EDT, by University of Texas Health Science Center at Houston
favorite_border 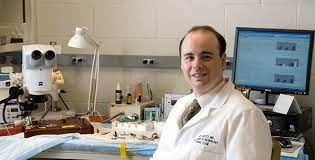 Newswise — Researchers led by Sean I. Savitz, MD, reported today in the journal Stem Cells that bone marrow cells used to treat ischemic stroke in an expanded Phase I trial were not only safe and feasible, but also resulted in enhanced recovery compared to a matched historical control group.

In addition, using serial diffusion tensor imaging, the repair of motor nerve tracts that extend from the brain through the spinal cord were captured for the first time in study participants, according to the team at The University of Texas Health Science Center at Houston (UTHealth).

“In the typical stroke injury, you can see the degeneration of the nerve tracts where it thins out,” said Savitz, director of the Institute for Stroke and Cerebrovascular Disease and professor of neurology with McGovern Medical School at UTHealth. “What surprised us was that after three to six months, we could see the tracts thicken up again in some patients. We do not typically see that same level of response in patients with such severe strokes but further research will be needed to determine if the return of the nerve tracts is because of the cell treatment or part of natural recovery.”

The team also reported that patients in the cell-treated group had a 1-point improvement in the Day 90 modified Rankin score, a 6-point scale considered the gold standard for rating stroke recovery and disability. The study patients were compared to a propensity score-based matched control group to estimate the improvement in effect size. Farhaan S. Vahidy, PhD, MBBS, MPH, director of Population Health at the Institute for Stroke and Cerebrovascular Diseases and associate professor of neurology with McGovern Medical School at UTHealth, was first author of the paper and performed the analyses.

The pilot study, which began in 2009, was the first of its kind using a patient’s own bone marrow cells. Results from the first 10 patients were published in 2011 in the Annals of Neurology.

The latest paper included results from 25 patients, who received an intravenous dose of their own bone marrow cells within 72 hours after first symptoms of stroke. They were followed for one year after treatment and the results compared to a control group of 185 acute ischemic stroke patients who received conventional treatment only. No definite severe adverse events related to the procedures were seen in any of the 25 patients, the research showed.

The authors wrote that the regenerative potential of bone marrow mononuclear cells is attributed to various mechanisms that impact stroke recovery and is supported by extensive preclinical studies that Vahidy analyzed in a study published in the American Heart Association journal, Stroke, in 2016. The cells migrate to the site of injury and release proteins that decrease the inflammation hindering the healing process. Bone marrow cells are also easily amenable to autologous infusion, eliminating the need for immunosuppressive drugs.

“According to our findings, it is feasible to perform a bone marrow harvest and then infuse the cells in a wide range of stroke patients,” Savitz said. “Well-designed randomized clinical trials are needed to further assess safety and efficacy of this novel approach to enhance stroke recovery.”

Over the past decade, Savitz has researched both autologous stem cells and allogeneic stem cell products. He conducted and published early preclinical studies on MultiStem, a human bone marrow stem cell product, and has just enrolled the first UTHealth patient in a Phase III clinical trial of the product.

Savitz is also lead investigator of a Phase IIB study investigating a stem cell therapy injected directly into the brain to treat stroke disability. The trial, called PISCES III, is a Phase IIB, randomized, placebo-controlled, multicenter study enrolling a total of 110 eligible ischemic stroke patients, age 35 to 75, who are experiencing persistent disability six to 12 months post-stroke. For more information on how to enroll, call Dory Parker, research coordinator, at 713-500-7085 or email [email protected].