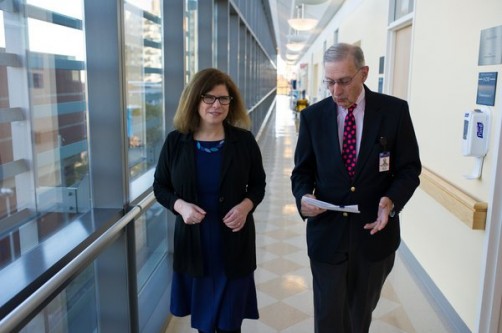 Newswise — As Chuck Peal lay in a Waterbury, Conn., emergency room one Sunday in early September, doctors furiously tried to make sense of his symptoms. Mr. Peal, 61, appeared to be dying, and they were not sure why.

He slipped in and out of consciousness, his blood pressure plummeted, his potassium levels soared and his blood sugar spiked to 10 times the normal level. A doctor suspected a heart attack, but uncertainty left him urgently researching the situation on his phone.

This was not a heart attack. Mr. Peal’s body was attacking itself, a severe reaction by his immune system that was a side effect of a seemingly miraculous cancer treatment aimed at saving his life.

In the seven weeks prior, doctors at Yale had combated Mr. Peal’s melanoma with two of the most promising drugs in cancer treatment today. These medicines work by stimulating the immune system to attack cancer as ferociously as it does other threats, like viruses and bacteria.

These so-called immunotherapy drugs have been hailed as a breakthrough in cancer treatment, attracting billions of research dollars and offering new hope to patients out of options. But as their use grows, doctors are finding that they pose serious risks that stem from the very thing that makes them effective. An unleashed immune system can attack healthy, vital organs: notably the bowel, the liver and the lungs, but also the kidneys, the adrenal and pituitary glands, the pancreas and, in rare cases, the heart.

Doctors at Yale believe immunotherapy is causing a new type of acute-onset diabetes, with at least 17 cases there so far, Mr. Peal’s among them. In cancer clinics around the world, and in drug trials, myriad other side effects are showing up. Studies are finding that severe reactions occur nearly 20 percent of the time with certain drugs, and in more than half of patients when some drugs are used in combination.

Another recent paper found that 30 percent of patients experienced “interesting, rare or unexpected side effects,” with a quarter of the reactions described as severe, life-threatening or requiring hospitalization. Some patients have died, including five in recent months in clinical trials of a new immunotherapy drug being tested by Juno Therapeutics Inc.

The upshot, oncologists and immunologists say, is that the medical field must be more vigilant as these drugs soar in popularity. And they say more research is needed into who is likely to have reactions and how to treat them.

“We are playing with fire,” said Dr. John Timmerman, an oncologist and immunotherapy researcher at the University of California, Los Angeles, who recently lost a patient to side effects. The woman’s immunotherapy drugs had successfully “melted away” her cancer, he said, but some weeks later, she got cold and flulike symptoms and died in the emergency room from an inflammatory response that Dr. Timmerman described as “a mass riot, an uprising” of her immune system.

“We’ve heard about immunotherapy as God’s gift, the chosen elixir, the cure for cancer,” he said. “We haven’t heard much about the collateral damage.”

Despite the warnings, physicians like Dr. Timmerman remain hugely supportive of drugs that are saving the lives of people who would otherwise die. Far better to cope with diabetes, hepatitis or arthritis, the thinking goes, than to die. Most reactions are not nearly so bad and are treatable.

The rub, doctors and researchers say, is that the medical system — from front-line nurses to oncologists to emergency rooms — is too often caught off guard. This is happening for a number of reasons: The drugs are new, so many side effects just have not been seen. Symptoms appear at random, sometimes months after treatment, and can initially seem innocuous. Finally, oncologists are now trying to treat patients with a combination of two or more immunotherapy drugs, hoping for more effective treatment but sometimes getting amplified risks.

In the meantime, these drugs are moving from academic centers into cancer clinics across the country, where oncologists in smaller cities most likely have less experience with the side effects.

And with lives to be saved and billions of dollars to be made — $250,000 or more is the list price for a year of some regimens — not enough research has been done into the risks of the new therapies, said William Murphy, a professor of dermatology at the University of California, Davis, who reviews immunotherapy-related grants for the government.

It is “a massively understudied area,” Dr. Murphy said, adding: “The No. 1 priority is anti-tumor effects. Everything else, however severe, is considered the price worth paying.”

Caught in the middle are patients like Mr. Peal, whose stories show the delicacy of tinkering with the immune system. It may hold the keys to curing cancer if it can be at once stoked and tamed.

Mr. Peal, bespectacled and lean, was dealing with melanoma that had spread to his lungs in June 2015 when he saw a Yale oncologist, Dr. Harriet Kluger. In the past, a patient like him would have been given little chance.

“We’d sit the patient down and say, ‘I’m really sorry, the median life expectancy is nine months. Get your affairs in order,’” said Dr. Kluger, who runs immunotherapy clinical trials focusing on skin and kidney cancer.

Now she could offer Mr. Peal hope. Consider: One study co-authored by Dr. Kluger found positive responses in more than 40 percent of advanced melanoma patients when they used a combination of two major immunotherapy drugs, nivolumab and ipilimumab.

Other research, however, shows that the promise comes with real risks. A 2015 paper in The New England Journal of Medicine showed that use of these drugs carried a risk of side effects that were severe, required hospitalization or were life-threatening 54 percent of the time.

“It’s at least that high, at least,” Dr. Kluger said. But, she noted, most of the side effects are manageable through immune suppression, such as with steroids.

The effectiveness of immunotherapy drugs and their side effects are intimately bound by the same biological mechanisms.

Called checkpoint inhibitors, the drugs work by essentially reversing a trick that cancer plays on the immune system: The cancer cells send nefarious signals to immune-system cells that cause them to stand down. Cancer is turning on the immune system’s brake.

There is a valuable reason the brake exists: It can shut down the body’s powerful defenders so that they do not inadvertently attack the body itself. Cancer is taking advantage of this key survival mechanism.

When an immunotherapy drug turns the brake off, the immune system can sometimes shrink tumors in mere days.