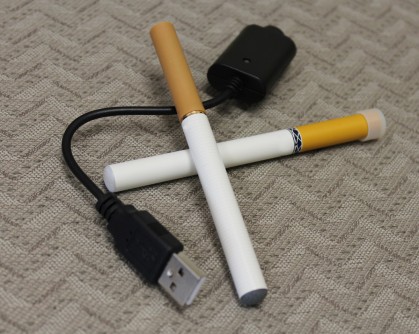 Shaped like a traditional cigarette, these battery-operated devices emit a nicotine vapor that could also contain flavorings. Another form of e-cigarette is a vaporizer type, which functions similar to an e-cigarette but allows users to add their own nicotine-containing liquid to the device. Not many nationally-representative studies exist regarding e-cigarette use in the United States. The few surveys that have been conducted define ‘current use’ as any use of the product in the past 30 days.

“That measurement doesn’t paint a clear picture,” notes senior author Cristine Delnevo, PhD, MPH, co-leader of the Cancer Prevention and Control Program at the Cancer Institute, who also is the director for the Center for Tobacco Studies at the School of Public Health. “Under this form of assessment, any use during the past 30 days could constitute the person who experiments with the device just one time and decides not to do so again. These individuals are being counted with those who may use e-cigarettes several times a week or even daily.”

Dr. Delnevo and colleagues took a closer look at patterns in e-cigarette use and how this use is measured. Their research, which appears in the current online edition of American Journal of Preventive Medicine (http://dx.doi.org/10.1016/j.amepre.2014.04.009), examined the prevalence of ever use, current use, and a newly created category of established use. The team used nationally representative data from a 2013 web survey that captured 2,136 current and former smokers who had quit within the past five years of being surveyed.

‘Ever use’ comprised those participants who responded that they have tried e-cigarettes – even once. ‘Current users’ were considered those who gave a number greater than zero when reporting how many days they used e-cigarettes within the past 30 days. Those who responded to using e-cigarettes more than 50 times in their life and at least once in the past 30 days were considered ‘established users.’ Information on gender, age, education, race/ethnicity, census region and cigarette smoking status also was captured, as was type of e-cigarette used, where those devices were purchased and the price of cigarette taxes in the user’s state.

Overall, researchers found that ever use of e-cigarettes is highest among current every day smokers (49.6 percent) as compared to former smokers (38.3 percent), but former smokers are significantly more likely to be established users of e-cigarettes (8.3 percent) as compared to current every day smokers (2.8 percent). “This could suggest that some smokers have successfully used e-cigarettes to quit, but future studies are needed to further investigate this relationship,” notes lead author Daniel P. Giovenco, MPH, CHES, of the Center for Tobacco Studies. The study further found that younger individuals and those living in states with a higher cigarette tax were associated with higher rates of trial or experimentation but not with current and established use.

“These findings highlight the importance of delineating experimental or ever use – from adoption or established use,” adds Delnevo, who is also a professor and chair of health education/behavioral science at the School of Public Health. “As the U.S. Food and Drug Administration seeks to extend its regulatory authority over e-cigarettes, it will be important for research to answer questions about whether or not e-cigarettes can help cigarette smokers quit combusted tobacco use. With that, better identification of individuals who sustain e-cigarette use is needed, as labeling those who have tried the device even once as an ‘established’ user is misleading.”

The authors note there were limitations to the study including the restriction to current and former smokers and the small sample size of established e-cigarette users. They also indicate any future studies may want to address increasing the usage threshold that would identify an established user.

Along with Delnevo and Giovenco, the author team consists of M. Jane Lewis from the School of Public Health. The research was supported by the National Cancer Institute (R21CA155956 and R21CA159160).

American Journal of Preventive Medicine May-2014