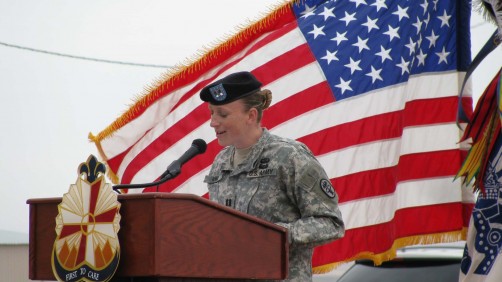 First-generation college student Joetta Khan found the answer to the challenges of receiving an education through the military. Now, the registered dietitian has earned her PhD and is giving back – by using her research and expertise to improve military preparedness through nutrition.

Newswise — Though Army Major Joetta Khan has served throughout the world, the registered dietitian remains true to her roots as a farm girl from rural Deming, New Mexico.

“When we talk about nutrition, we start with the family meal,” says Khan, who earned her Ph.D. in health education and behavioral science this spring from Rutgers School of Public Health and was recently named director of research in the graduate program of nutrition at Walter Reed National Military Medical Center in Bethesda, Maryland.

“I was one of seven children,” she says. “We spent the day together planting and harvesting, and then always sitting down to a healthy family dinner. I learned early on the importance of being connected to where your food comes from and how you’re preparing it.”

Khan had long considered working in the field of nutrition, but the challenges to higher education seemed insurmountable. “Neither of my parents attended college,” she says. “Academics weren’t that important in our home. It was more about being engaged with the family and the farm.”

But Khan wanted see the world, and to do that she knew she needed to go to college. At 15, she received a scholarship to attend the New Mexico Military Institute, a science-intense boarding high school and junior college four hours away.

Although she appreciated the education, upon graduation, she was ready to say goodbye to military life. “I remember thinking how tired I was of the military and wearing a uniform. When I got a full scholarship to the University of New Mexico, where I would study nutrition and dietetics, I was looking forward to having a ‘normal’ life,” she says. “But was I in for a surprise.”

Upon realizing that she would have to pay for her required internship, Khan applied to programs that offered scholarships. “And go figure: I was matched with an Army dietetic internship at Walter Reed Army Medical Center,” she says. “So, I was a ‘normal’ citizen one day and a commissioned officer the next.”

From there, Khan’s life became a weave of military service and continuing education. Between working as a Registered Dietitian at military medical facilities from West Point to El Paso to Honolulu to Iraq, she earned her Masters of Public Health at New York Medical College and took military officer classes.

In 2014 the Army tapped her for a scholarship program that would allow her to pursue her Ph.D. “The Army wanted to increase its research in the field of nutrition and was offering one dietitian spot that year,” she says. “The requirements were that the program had to combine psychology, obesity and nutrition, which I found exciting.”

Khan sought schools with those areas of study in a location that also would allow her husband, who was deployed in Afghanistan, to be stationed close upon his return.

“Rutgers School of Public Health looked perfect because it had a Department of Health Education and Behavioral Science,” she says, “but none of the professors specialized in nutrition.” Then, she had a thought: She called Patrick Clifford, associate dean for research who specializes in alcohol and addiction studies, and asked if she could create a course of study in food addiction with him. He agreed.

“I liked the inclusive ‘I can work with you’ attitude Rutgers gave me,” she says. “I didn’t get that anywhere else.”

There was another hitch: The Army had given Khan only three years to complete a program that typically takes students five to seven years.

With Clifford’s assistance, Khan designed a plan to complete her degree in the allotted time by taking the maximum amount of credits with no breaks. Despite this high credit load, she expertly navigated life as a new mother to daughter, Mina, who was 18 months old when Khan enrolled at Rutgers.

In addition to her coursework, Khan volunteered to serve as a research assistant on Clifford’s study analyzing patient response to different types of alcohol treatment. This piqued her interest in exploring alcohol use against factors such as eating and exercise and how that affects military readiness. “Alcohol use had not been researched in terms of military readiness, nutrition and exercise — an important thing to consider with the force being smaller,” she says.

She plans on using her dissertation “Military Readiness: Relationships Among Alcohol Use, Eating Habits, Exercise and Body Mass Index,” as the basis for articles to educate military personnel on improving the health of soldiers and better foster military preparedness. And she will use this knowledge in her new role at Walter Reed, guiding graduate students in their research and performing clinical duties at the medical center.

As she settles into her new home in Gaithersburg, Khan reflects on how her life has come full circle. “I might not live on a farm any longer,” she says, “but I plant a garden so that Mina can understand that connection between the earth and how it fuels your body and enhances your health.”