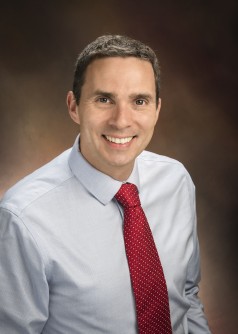 Ingo Helbig, MD, is a pediatric neurologist at Children's Hospital of Philadelphia

Newswise — Philadelphia, March 22, 2018 – Neurology researchers investigating a rare but devastating neurological regression in infants have discovered the cause: gene mutations that severely disrupt crucial functions in mitochondria, the energy-producing structures within cells. The specific disease mechanism, in which mutations disrupt a critical mitochondrial enzyme, has not previously been implicated in a human disease.

“We uncovered the cause of this mysterious neurodegenerative disease, and now we understand better what happens in the brains of these children,” said lead investigator Ingo Helbig, MD, a pediatric neurologist at Children’s Hospital of Philadelphia (CHOP). “This new understanding is the very first step toward potentially finding a treatment.”

Helbig collaborated with researchers from Germany, Australia and the U.S. in this study, published online today in the American Journal of Human Genetics. The other two co-senior authors were Dr. Franz-Josef Mueller, of the University Hospital Schleswig Holstein, Kiel, Germany; and Dr. Johan L.K. Van Hove, of the University of Colorado.

For Helbig, now an attending physician in the Neurogenetics Program at CHOP and a specialist in genetic epilepsies, the finding builds on an experience early in his medical training when he was involved in the care of an infant girl with severe epilepsy. The child suffered sudden neurological regression after a fever, for no apparent reason. Imaging studies showed the child lost brain volume, mainly in the cerebellum.

The symptoms appeared to mimic those of a progressive neurological disease. Instead, it turned out to be due to energy failure, based in malfunctioning mitochondria, but this became apparent only after nearly a decade of research.

The current study reports on five affected children in four families, including the original patient and her sibling. Both siblings, along with a third patient in the study, died before six years of age. None of the five children were able to walk or speak, and all but one had seizures.

The research team used whole-exome sequencing to pinpoint the causative mutations in the gene PMPCB. Because that gene is highly conserved across yeast and humans, the researchers conducted experiments in a common yeast to investigate the effects of the mutation.

The researchers found that mutations in PMPCB interfered with the function of the enzyme mitochondrial processing protease (MPP), which transports proteins into mitochondria to be cut up as part of normal biological processing. Disrupting that process, in turn, blocked the production of iron-sulfur clusters that are crucial to energy metabolism and other cellular functions.

In infants, the diminished activity of MPP causes a deficiency of biological energy. An infection or fever triggers a crisis--a cascade of severe events, including brain atrophy and the neurological regression seen in the patients. The symptoms appear similar to those seen in the well-known mitochondrial disorder Leigh’s syndrome.

The biological pathways that MPP is involved in are closely related to the more common neurological disease Friedreich’s ataxia, which is also actively studied by researchers at CHOP. In fact, frataxin, the protein altered in Friedreich’s ataxia, is one of the main targets of MPP. The conditions however, are very different, and the PMPCB-related disorders identified by Helbig and his collaborators are more severe than Friedreich’s ataxia.

The current findings, said Helbig, set the stage for follow-up research in biological implications, for instance, by further investigation in yeast models of the disease. “If we better understand biological pathways and mechanisms,” he added, “we may be able to start screening for compounds that may suggest potential treatments for this condition.”

See Helbig’s research blog, “Beyond the Ion Channel” for his description of the discovery of PMPCB’s role in this condition.

This study had multiple sources of funding support, including the German Research Foundation, the University of Kiel, the Deutsche Forschungsgemeinschaft, the Japan Agency for Medical Research and Development, Miracles for Mito, Summits for Samantha, and the Children’s Hospital Colorado Foundation.