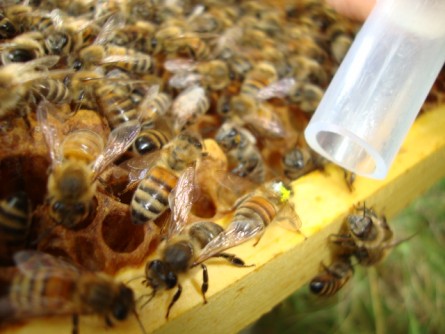 Newswise — A novel study of honey bee genetic diversity co-authored by an Indiana University biologist has for the first time found that greater diversity in worker bees leads to colonies with fewer pathogens and more abundant helpful bacteria like probiotic species.

Led by IU Bloomington assistant professor Irene L.G. Newton and Wellesley College assistant professor Heather Mattila, and co-authors from Wellesley College and the Netherlands Organisation for Applied Scientific Research, the new work describes the communities of active bacteria harbored by honey bee colonies. The study, which was conducted at Wellesley College in 2010, is also the first to identify four important microbes in bee colonies that have previously been associated with fermentation in humans and other animals: Succinivibrio (associated with cow rumens), Oenococcus (wine fermentation), Paralactobacillus (food fermentation) and Bifidobacterium (yogurt). Newton, who joined the IU College of Arts and Sciences' Department of Biology last year, said the research suggests honey bees may take advantage of these beneficial symbiotic bacteria to convert indigestible material into nutritious food and to enhance protection from pathogens.

The research identified, for the first time, important food-processing genera in honey bee colonies: Succinivibrio and Oenococcus were the dominant genera found in the study, and there was 40 percent greater activity of the probiotic genera Bifidobacterium and Paralactobacillus in colonies that were genetically diverse compared to those that were genetically uniform. Genetic diversity is created in a colony when a queen mates with many male bees, an act that is known to improve colony health and productivity.

"We don't yet know what's causing colony collapse disorder, but colonies that succumb to it suffer from a broad range of problems," Newton said of a phenomenon that the U.S. Department of Agriculture says has taken about 34 percent of the overall U.S. honey bee population each year since 2007. "What we observed in our work was that there was less likelihood of potentially pathogenic bacteria showing up in genetically diverse honey bee colonies compared to genetically uniform colonies."

The team was able to sample and then classify over 70,500 genetic sequences for bacterial genera from 10 genetically uniform colonies and 12 genetically diverse colonies by analyzing a specific molecule found in RNA -- a first for examining honey bees and their symbiotic microbes. Their study is the largest of its kind -- the single-largest analysis of newly identified active microbes ever to be identified in honey bees. In addition, they revealed that those microbes were more diverse in genetically diverse colonies (1,105 unique bacterial species) compared to genetically uniform colonies (781 species).

Newton's co-author, Heather Mattila, has been investigating the benefits of genetic diversity for honey bees for years and was thrilled to have Newton's microbial expertise incorporated into the project.

"This is an exciting result because it gives us insight into how individual bees and their symbionts can enhance the overall health of a colony when it is genetically diverse," Mattila said.

It is yet unknown how genetic diversity within a colony generates and maintains more diverse and healthful bacteria. A honey bee colony is a eusocial superorganism -- thousands of worker sisters work together to execute all tasks needed by the whole. Honey bees may benefit from the bacterial symbionts that they host by increased resistance to colonization by pathogens or through the production of nutrients by these microbes. Newton and Mattila believe the work has clear implications not only for how colonies are managed worldwide but also for the evolutionary advantages that polyandry (mating with multiple males) holds for eusocial honey bees.

"We are particularly interested in these results, and think the public will be too, given the alarming honey bee colony losses in recent years due to colony collapse disorder, as well as the role that these pollinators play in the security of our food supply," Newton said. "From what we've found at this point, I guess you could say that when you are living with 40,000 of your closest relatives, it pays to be genetically diverse."

Co-authors with Newton and Mattila were Wellesley undergraduates Daniela Rios and Victoria Walker-Sperling, and Guus Roeselers of the Netherlands Organisation for Applied Scientific Research. Funding was provided by Wellesley's Brachman Hoffman Awards and a grant from the Essex County Beekeepers Association, Massachusetts.