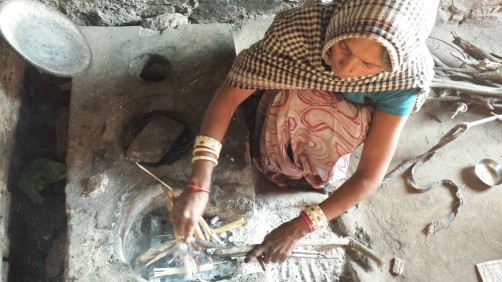 A woman in the rural region of Rajasthan, India, cooks on a three-stone hearth equipped with a metal insert developed by a University of Iowa engineer. 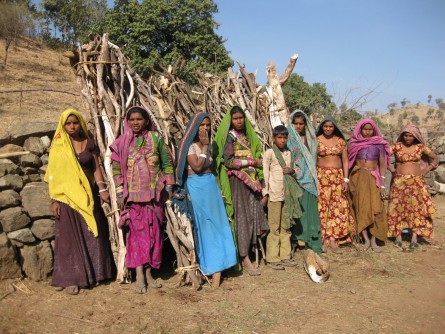 Women from the village of Karech stand with the wood collected for daily cooking. Each pile weighed about 50 pounds. 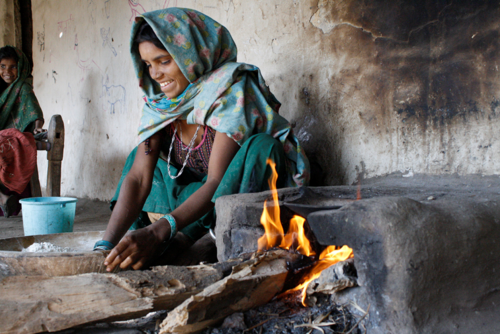 A woman in the village of Karech prepares a meal on a traditional three-stone hearth. Evidence of soot emission can be seen on the wall behind the cookstove. 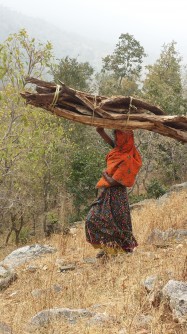 A woman in the Indian village of Karech carries wood needed for daily cooking. The bundle weighs about 50 pounds.

Newswise — An inexpensive metal insert for primitive cookstoves created by a University of Iowa researcher may decrease global warming and potentially save the lives of thousands of women and children.

The study authored by UI professor of mechanical and industrial engineering H.S. Udaykumar was published in the November issue of Solutions.

Udaykumar spent several weeks earlier this year in the western India region of Rajasthan investigating ways to decrease the amount of firewood used for daily cooking by women in the village. His goal was to help prevent deforestation in developing countries, but he discovered two secondary benefits that have proven extremely significant.

The rural village is on the edge of a national forest and wildlife refuge, where women and girls trek each day to gather firewood for cooking on the traditional three-stone hearth stoves, called chulhas.

The amount of wood harvested from the forest for cooking has “been devastating” and has begun to alter the habitat.

“That area used to have a lot of wildlife, including panthers and tigers,” Udaykumar says. “There are no tigers there now and there are only six or seven panthers left in that whole forest.”

When using firewood to cook on the poorly ventilated and inefficient chulhas, which do not have chimneys, smoke and soot settles inside the home.

But more important than finding a way to decrease wood consumption, he says, is decreasing the black carbon emissions, which are known to cause respiratory disease.

“Also, black carbon goes into the atmosphere and some people think it is the No. 2 reason for global warming,” he says. “All that soot goes up in the air and settles on ice and darkens the ice, which causes it to absorb more solar radiation and subsequently warms the earth.”

After failed attempts at getting women in the village to use high-efficiency cookstoves made of metal – partly because of their $30 cost -- researchers came up with the idea of a metal grate insert for the three-stone hearths the women refused to abandon.

The insert, called Mewar Angithi, is made from a steel plate with air holes punched in it. The device costs about $1.

“It’s a glorified grate, really. And so it’s simple to make,” Udaykumar said.

The insert separates the ash from the wood and allows air flow from under the burning wood, which increases its efficiency.

Researchers found that using the metal insert decreased wood consumption by about 60 percent and anecdotally observed a significant reduction of smoke, although no formal emissions measurements were taken in the homes. Further testing on soot emissions was later conducted in a national lab in India, and Udaykumar and his team found that the metal insert actually decreased emissions by 90 percent.

The World Health Organization estimates that some 2.7 billion people worldwide still rely on food cooked by burning wood and more than 4 million people die prematurely each year from illness connected to household air pollution from that method of cooking.

About 2,000 of the inserts are in use at the present time, and additional research will take place in India this winter, Udaykumar said.