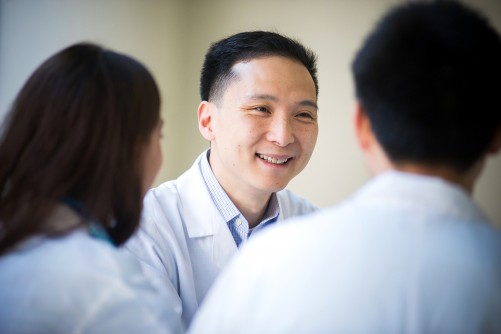 Newswise — (MEMPHIS, Tenn. – January 26, 2015) About 10 percent of young leukemia patients of East Asian ancestry inherit a gene variation that is associated with reduced tolerance of a drug that is indispensable for curing acute lymphoblastic leukemia (ALL), the most common childhood cancer. St. Jude Children’s Research Hospital scientists led the study, which is being published online today in the Journal of Clinical Oncology.

Researchers reported that patients who inherited either one or two copies of the newly identified variation in the NUDT15 gene were extremely sensitive to the drug mercaptopurine. Patients with the NUDT15 variant required a mercaptopurine dose reduction of as much as 92 percent. At standard doses patients developed side effects that caused treatment delays and threatened their chances of cures.

The finding should aid efforts to improve identification and treatment of patients who need reduced doses of mercaptopurine. Mercaptopurine is the backbone of chemotherapy that has helped transform the outlook for young ALL patients. At St. Jude, 94 percent of newly diagnosed ALL patients now become long-term survivors.

In this study, patients of East Asian and Hispanic background were more likely to inherit the NUDT15 variant than those from other racial and ethnic groups. Among patients of East Asian ancestry, 9.8 percent carried at least one copy of the NUDT15 variant, compared to 3.9 percent of Hispanic patients. The variant was rarer among those of European or African ancestry. East Asia includes China, Japan and Korea.

“Mercaptopurine intolerance has been suspected to be a problem for young ALL patients of East Asian ancestry. Even at very low doses, the patients often develop toxicity that delays treatment, but until now the genetic basis of the problem was unknown,” said Jun J. Yang, Ph.D., an assistant member of the St. Jude Department of Pharmaceutical Sciences. Yang is first and corresponding author of the paper.

St. Jude is a pioneer in the field of pharmacogenetics, which focuses on how inherited differences in the makeup of genes influence patients’ drug responses. This study confirmed previous St. Jude research that showed variations in another gene, TPMT, were also associated with an increased risk of mercaptopurine toxicity. St. Jude patients are now routinely tested for the TPMT variants, and the results help determine the mercaptopurine dose patients receive.

The TPMT variants did not completely explain mercaptopurine toxicity. The TPMT variants are less common in individuals of East Asian ancestry. TPMT carries instructions for a protein of the same name. Some patients with normal TPMT still cannot tolerate standard doses of the drug. “That suggested there are other inherited genetic risk factors at play,” Yang said.

This study is the most comprehensive effort yet to identify the genetic basis of mercaptopurine intolerance in young ALL patients. Researchers screened the DNA of 657 pediatric ALL patients for 40,889 different inherited genetic variations. The patients were enrolled in a Children’s Oncology Group (COG) clinical trial. COG is a federally supported clinical trials network focused exclusively on childhood cancer research. Patients were scheduled to receive standard daily doses of mercaptopurine. The doses were reduced, however, if patients developed infections or other drug-related complications.

Patients who inherited variations in TPMT or NUDT15 tolerated mercaptopurine at significantly lower doses than patients who inherited the more common versions of the genes. Investigators checked 371 young ALL patients enrolled in a separate St. Jude clinical trial and confirmed the association. The same NUDT15 variation has also been linked to mercaptopurine toxicity in Korean patients with inflammatory bowel disease.

TPMT carries instructions for assembling an enzyme of the same name that inactivates mercaptopurine and related drugs. The TPMT variants are less able to inactivate the drug, which can lead to a dangerous build-up of mercaptopurine and suppression of the immune system. Researchers suspect that the NUDT15 variant acts in a similar fashion. “The results of this study confirm that TPMT genetic variation is one of the most critical determinants of mercaptopurine tolerance, particularly in non-East Asian populations,” said senior author Mary Relling, Pharm.D., chair of the St. Jude Department of Pharmaceutical Sciences. “But we also found that TPMT variants do not completely explain mercaptopurine intolerance, particularly in patients of East Asian ancestry.”

Six percent of the patients in this study who required more than a 50 percent reduction in mercaptopurine inherited neither the TPMT nor NUDT15 variants. “Other factors, both genetic and non-genetic, are still to be discovered to improve the safety and effective of mercaptopurine treatment for children with ALL,” Relling said.