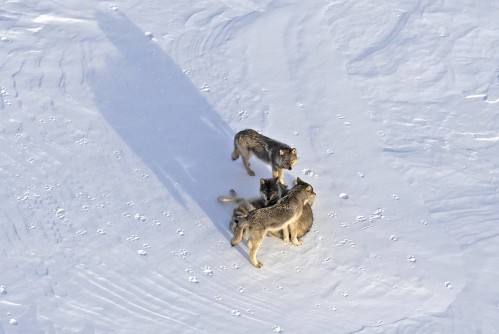 Two pups from the eastern pack try to rouse packmates for play. 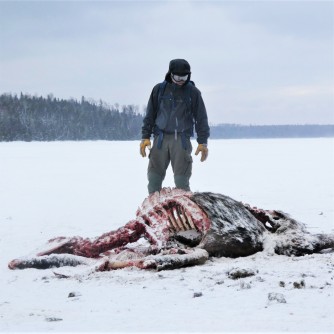 A large group of wolves were seen feeding on a moose on the ice near Daisy Farm at the east end of the Isle Royale National Park on 7 February. After that large group of wolves had left the area, Ky and Lisa Koitzsch visited the kill site to determine the age and sex of the dead moose and to collect scat samples from wolves for genetic analysis. 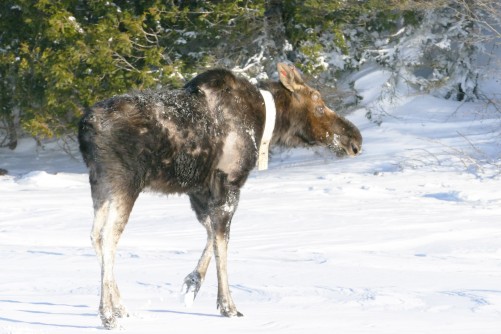 A bull moose, outfitted with a GPS collar near Beaver Island at the west end of Isle Royale in February 2022, shown having lost or damaged large patches of its winter coat, especially near the shoulder region. This bull died on 14 April 2022, seemingly from malnutrition.

Newswise — More pups, increased predation and pesky parasites are among highlights of the 63rd annual Winter Study, which focuses on the island’s wolf and moose populations. Michigan Technological University researchers Sarah Hoy, John Vucetich and Rolf Peterson conducted the expedition by ski and plane from Jan. 25 to March 6, with fieldwork returning to pre-pandemic levels for the first time in two years.

For more information and to access the Winter Study report, read the full story at MTU News.

Michigan Technological University is a flagship technological public research university founded in 1885 in Houghton, Michigan. The University offers more than 125 undergraduate and graduate degree programs in science and technology, engineering, computing, forestry, business and economics, health professions, humanities, mathematics, social sciences, and the arts. The rural campus is situated just miles from Lake Superior in Michigan’s Upper Peninsula and is home to more than 7,000 students.