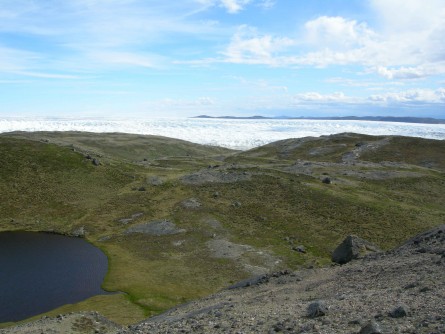 The western edge of Greenland's mammoth ice sheet can be seen in the distance. In the foreground is a small pond surrounded by bedrocks hills.

Newswise — BLOOMINGTON, Ind. -- Indiana University Bloomington scientists will use knowledge about methane production by cold-weather microbes on Earth to help NASA zero in on evidence for similar, carbon-based microbes that could have evolved on Mars, the Jovian moon Europa, or Saturn's Enceladus.

The three-year project, funded by a $2.4 million grant from NASA's Astrobiology Science and Technology for Exploring Planets (ASTEP) program, will be led by biogeochemist Lisa Pratt. Her team will conduct field research in Greenland using the Kangerlussuaq International Science Support Facility as the base of operations and moving instruments and equipment to the Arctic with the 109th New York Air National Guard, which provides logistical support for NASA- and National Science Foundation-run research projects in remote polar regions.

"In order to be prepared for robotic or human exploration of other habitable worlds, scientists and engineers need to thoroughly test instruments and exploration concepts in extreme environments on Earth," said Pratt, Provost's Professor of Geological Sciences. "These environments mimic, in some ways, the places we expect to explore for evidence of extraterrestrial life."

Pratt will work with 11 colleagues at IU Bloomington, Princeton University, the Goddard Space Flight Center, the Jet Propulsion Laboratory, Honeybee Robotics Inc., and the National Oceanic and Atmospheric Administration, a division of the U.S. Dept. of Commerce. Their primary goals: study methane release near the receding edge of Arctic ice sheets to glean clues about how life might exist at the edge of extraterrestrial ice sheets, and evaluate methods to determine whether sources of methane are biotic or abiotic in origin.

On Earth, some methane is produced abiotically through water-rock reactions and thermogenically through breakdown of petroleum by geological processes. And some of Earth's methane comes directly or indirectly from bacteria -- either as a waste product or through the fermentation of acetate (vinegar) into methane and carbon dioxide. Both methane and carbon dioxide are greenhouse gases.

Pratt recently concluded a directorship of a NASA Astrobiology Institute team that studied energy and nutrient cycles that sustain life in the deep subsurface of Earth and, potentially, Mars. One of the fruits of that project was the discovery of bacteria on Earth that live kilometers below ground, in solid rock, and use the byproducts of irradiated water as a source of energy.

The connection between Earth and environs elsewhere in the solar system is a necessary part of astrobiology. We only know of life on our own planet, so the conditions that support life on Earth are our only point of reference for what's possible on Mars, Europa, and Enceladus, the three bodies currently deemed most likely to harbor (or to have once harbored) life.

"Our work on methane cycling in warming tundra ecosystems fits well with the objectives for exploration of methane cycling on Mars -- a target of the upcoming missions," White said.

The study of global climate change on methane production is also of interest to researchers whose chief and perhaps only interest is what's happening on our planet.

"One other key aspect of this project is the ASTEP requirement for the field campaign to address an important Earth science question," Pratt said. "Our proposal was competitive because of the importance of documenting how methane is released from permafrost settings on Earth during a time of rapid de-glaciation."