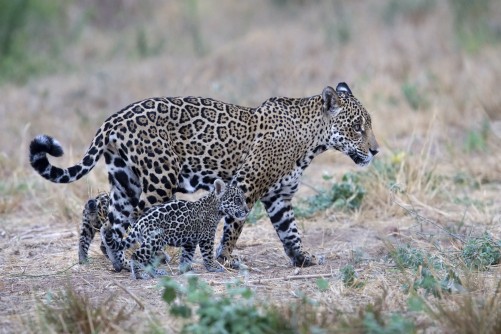 Newswise — NEW YORK (DATE) – The Wildlife Conservation Society (WCS) released today a dramatic photo of a female jaguar and her two cubs near the Isoso Station of the Santa Cruz-Puerto Suarez Gas Pipeline in Kaa Iya National Park in Bolivia. The adult jaguar, nicknamed Kaaiyana, has been seen with her cubs in the area for over a month; though WCS conservationists have confirmed she has been a resident in the vicinity for at least six years.

“Kaaiyana’s tolerance of observers is a testimony to the absence of hunters in this area, and her success as a mother means there is plenty of food for her and her cubs to eat,” said Dr. John Polisar, Coordinator of the Wildlife Conservation Society’s Jaguar Conservation Program.

At more than 13,200 square miles (34,400 square kilometers), Kaa Iya National Park is the largest protected area in Bolivia and safeguards the most expansive and best-conserved dry forest in the world. It is found in a transition zone between Chacoan and Chiquitano dry forest ecosystems and includes unique vegetation and rare wildlife such as giant armadillos, Chacoan titi monkeys, and Chacoan peccaries. The creation of Kaa Iya in 1995 marked the first time in South America that a protected area was established through the initiative of an indigenous group, the Guaraní-Isoceño people.

WCS has conducted extensive research in the area and estimates that at least 1,000 jaguars live in the Gran Chaco Jaguar Conservation Unit, a 47,000 square-mile (124,000 square kilometer) area spanning southern Bolivia and northern Paraguay. With support from the Liz Claiborne and Art Ortenberg Foundation, WCS is promoting conservation action across the Gran Chaco.

The construction of the 1,900-mile (3,100 kilometer) Bolivia-Brazil gas pipeline that cuts across Kaa Iya National Park and the Isoso indigenous land required developing institutional alliances to minimize environmental impacts. With the participation of private energy companies, which make up Gas TransBoliviano (GTB), as well as the Isoso indigenous organization, and an independent member, the Kaa Iya Foundation was created in 2003 as a mechanism to deliver a match with WCS funds to conduct wildlife research and environmental education in the park, which is funded and managed by the Bolivian government.

Among the research efforts first supported by the foundation were jaguar surveys. Kaayiana was first detected by WCS researcher Dr. Andrew Noss at the Isoso site in 2005 with male jaguars, and again in 2006 with a cub. The Kaa Iya park guards work with GTB personnel to prevent illegal hunting and settlements along the right-of-way to the gas pipeline and ensure the protection of wildlife, including jaguar prey, in the park.

“The photographic histories of jaguars in the area by WCS and the reproductive success of this female are testimony that conservation efforts have been effective,” said Julie Kunen, WCS Director of Latin America and Caribbean Programs.

The Wildlife Conservation Society saves wildlife and wild places worldwide. We do so through science, global conservation, education and the management of the world's largest system of urban wildlife parks, led by the flagship Bronx Zoo. Together these activities change attitudes toward nature and help people imagine wildlife and humans living in harmony. WCS is committed to this mission because it is essential to the integrity of life on Earth. Visit: www.wcs.org

###Special Note to the Media: If you would like to guide your readers or viewers to a Web link where they can make donations in support of helping save wildlife and wild places, please direct them to wcs.org.