Kavli Lecture: Mining the Secrets of Carbohydrates for New Leads on Antibiotics (Video) 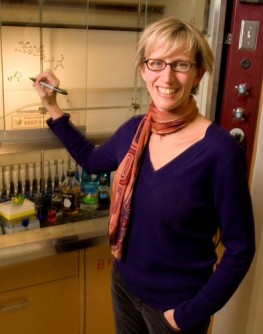 Laura Kiessling, Ph.D. discusses her work with glycans, the carbohydrate coating on all cells that serves as a critical conduit for information. Kiessling's group is trying to "decode" this information, which could revolutionize treatments for diseases and antibiotic development. She is the recipient of the Alfred Bader Award in Bioorganic Chemistry. Kiessling is currently the editor-in-chief of ACS Chemical Biology, an ACS publication.

Newswise — DENVER, March 23, 2015 — Laura Kiessling, Ph.D., thrives on steep learning curves. So when she started her research lab, she took a risk and plunged into the wide-open field of carbohydrates, which despite their ubiquity and notoriety for expanding waistlines, have many secrets. Now, her team has stumbled on something about these molecules that opens up new possibilities for fighting bacteria that are resistant to known antibiotics.

She will present her latest discovery during “The Fred Kavli Innovations in Chemistry Lecture” at the 249th National Meeting & Exposition of the American Chemical Society (ACS), the world’s largest scientific society. The meeting is taking place here through Thursday and features nearly 11,000 presentations on a wide range of science topics.

Carbohydrates’ infamous role in weight gain underrepresents to an enormous degree what this group of molecules is responsible for, explains Kiessling, a professor of chemistry and biochemistry and the director of the Keck Center for Chemical Genomics at the University of Wisconsin, Madison.

“Every cell on the planet wears a coat of carbohydrates — we all need them,” she says. “And those carbohydrates play a lot of roles. For example, blood type is determined by the carbohydrates on our red blood cell surfaces. They’re also used in vaccines and are important for development.”

A major challenge to understanding these molecules is that so far, there is no simple code to help scientists figure out what carbohydrates are produced by which cells or why. As scientists are finding out, this information could be particularly important when it comes to fighting bacteria. And it’s on this front where Kiessling saw tremendous opportunity.

“My lab is interested in the differences between the carbohydrates that humans and microbes put on their surfaces,” she says. “Most of the antibiotics we have don’t exploit those differences.”

If scientists could specifically target bacterial carbohydrates, it would open up a new field in antibiotic research. Kiessling’s lab has potentially hit upon such a way.

“It was really like a detective story with twists and turns,” she says.

Her team had been searching for a way to disrupt bacteria’s essential carbohydrate-making machinery. Instead they discovered that the human protein they were studying possesses a powerful trait — the ability to recognize carbohydrates unique to microbial cells. It was an unexpected but significant finding.

“A human protein that is selective for microbes could be harnessed to deliver an antibiotic or toxin to kill harmful bacteria without hurting human cells,” Kiessling explains. “It could also be used to detect and diagnose bacterial infections.

“The exciting part is that this could be a part of human immunity that we’re just beginning to reveal,” she says. “And maybe we have had within us all along a key to combatting microbial infections that we haven’t yet mined.”

Kiessling’s research was supported by the National Institutes of Health.

The Kavli lecture series is a result of a collaboration between ACS and The Kavli Foundation, an internationally recognized philanthropic organization known for its support of basic scientific innovation.