Keep Your Guard Up Against West Nile Virus 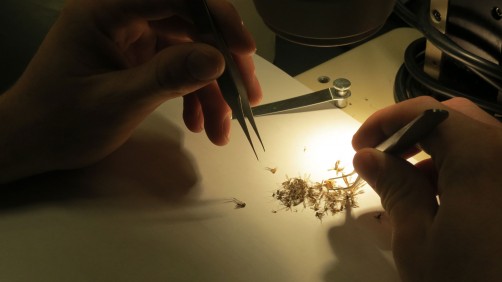 Members of the SDSU surveillance team sort mosquitoes trapped at the Brookings Nature Park by species and then send the Culex tarsalis specimens to the South Dakota Department of Health to determine whether any test positive for West Nile Virus. These numbers are then integrated into the predictive model that South Dakota State University researchers have developed. 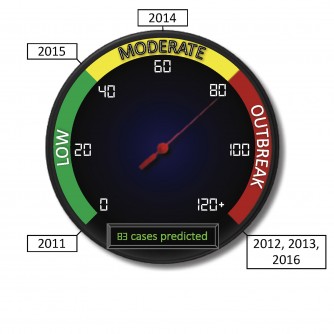 This speedometer on the Mosquito Information Systems website, www.mosquito.sdstate.edu, showed the current West Nile Virus seasonal forecast produced at the end of June, including the predicted cases, as well as risk levels for the last six years.

Newswise — Use insect repellent and wear protective clothing when we’re outside in the evening— even when it doesn’t feel like mosquitoes are biting.

That’s the take-home message from two South Dakota State University scientists who use data about weather conditions gathered from satellites circling the Earth and about mosquitos collected in traps on the ground to help mosquito control officers target West Nile Virus-carrying mosquitoes in South Dakota communities.

Total mosquito numbers are not always good risk indicator when it comes to West Nile Virus, according to professor Michael Wimberly, a senior scientist at the Geospatial Sciences Center of Excellence. “That’s why we need to use weather and vector mosquito data and produce a West Nile Virus forecast.”

Early predictions show that we’re on track for an above-average to average year for West Nile Virus in South Dakota, noted Wimberly. Though the number of human cases could range from 56 to 111, his current prediction is 83 human cases. The first case of West Nile virus in 2017 was reported on June 14 in Davison County.

Weekly forecasts are available at www.mosquito.sdstate.edu, thanks to support from the South Dakota Department of Health and a grant from the NASA Applied Science Public Health and Air Quality Program. Through the website, mosquito control officers can monitor the risk for West Nile Virus in their communities and adjust spraying efforts accordingly.

“Historically, drought years, such as 2012 and 2006, were some of our biggest West Nile Virus years,” Wimberly said.

“There’s enough evidence for 2017 to suggest that communities should be proactive, using larvicides and aggressive control measures against the adult vectors,” Hildreth said. “We have had relatively warm temperatures this past winter and spring, and reports of West Nile infected mosquitoes are coming in from multiple cities.”

When rainstorms hit, people will see more nuisance mosquitoes—these are the mosquitoes that swarm in large numbers and motivate people to take precautions, he explained. However, it is important to remember that there can be a high risk of West Nile transmission when conditions are hot and dry and mosquito numbers seem low.

Hildreth added: “We’re not just guessing. This model is built on 16 years of data and historical perspective.”