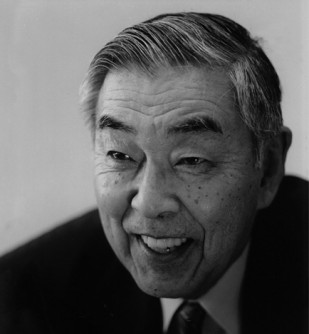 Newswise — LA JOLLA, CA—Dr. Kimishige Ishizaka, discoverer of a novel class of antibodies and the first Scientific Director of the La Jolla Institute for Allergy and Immunology (LJI), has died on July 6 in Yamagata City, Japan. He was 92 years old.

"Dr. Ishizaka was a true founding father of our Institute," said LJI President and Chief Scientific Officer Mitchell Kronenberg. "His agreement to join us at the very beginning signaled that the LJI would become a worthy place for the best scientists in the world to come and work. As our first scientific director and later as president, he instituted a culture of collaboration and caring, while promoting innovative, high quality research."

Known as "Kimi" to colleagues, Ishizaka was already a very distinguished scientist when he moved to La Jolla in 1989 to lead the fledgling Institute. Courted by the Kirin Brewing Company to guide the immunology research center they were building on Torrey Pines Mesa, Ishizaka arrived from Johns Hopkins University School of Medicine with his wife Teruko, an accomplished scientist in her own right.

Both had been immunology researchers at Hopkins for almost 20 years, but Ishizaka discovered the antibody proteins that would make him famous even before that. In 1962, Ishizaka and Teruko, already partners in marriage and science, had come to the U.S. from Japan to do immunology research at the Children’s Asthma Research Institute and Hospital, he as assistant professor and she as research immunologist. There, in 1966 they co-authored a paper in Journal of Immunology that unveiled a brand new class of antibodies, one associated with allergy. That groundbreaking finding would establish Ishizaka as a pioneer in his field and win him prestigious scientific prizes over the next 40 years.

Before then, researchers knew that "reaginic factors" in the blood prompted reactions resembling anaphylaxis, a severe, whole body allergic reaction that can be fatal, when hypersensitive individuals encountered allergens. But the molecules responsible for the response were unclear. Experiments conducted by the Ishizakas revealed the reaginic factor to be an allergen-specific immunoglobulin protein (now called immunoglobulin E or IgE), distinct from the previously characterized IgA or IgG immunoglobulins that drive immune responses to pathogens.

Moreover, they found that IgE proteins elicited allergic responses by binding to immune mast cells, a type of white blood cell, causing them to release histamine and other inflammatory factors that foment allergic responses like wheezing, rashes, or itching. Nowadays, routine blood tests used to validate an allergic response monitor levels of IgE antibodies in response to a test stimulus.

After that discovery, Ishizaka spent 25 years conducting immunology research into IgE molecular signaling and mast cell responses together with Teruko, first in Denver, where he became chief of immunology of the Children's Asthma Research Institute and Hospital, and then on the faculty of the School of Medicine at Hopkins. Over those years, Ishizaka himself published close to 200 papers and reviews relevant to the topic, most including Teruko as co-author.

At LJI, Ishizaka continued laboratory work but also assumed an administrative role as scientific director and led the institute through its formative years, taking on the additional role of president in 1991. He was particularly renowned for generosity in guiding careers of young scientists he recruited there, among them Toshiaki Kawakami, now a full professor at the institute. Another early recruit was Amnon Altman, who Ishizaka lured from a faculty position "across the street" at what was then called the Scripps Clinic and Research Foundation (now The Scripps Research Institute).

"The positive thing about Kimi from the beginning was his scientific stature, which automatically accorded the institute very high esteem," said Altman, professor and director of scientific affairs. "Later, we realized Kimi and his wife were unique not only in doing excellent science but could inspire people to work collaboratively. That emphasis on harmony seemed to be part of coming from a Japanese culture. It still is in place here today—it's why the institute has done so well."

Maintaining harmony occasionally called for tough decisions on Ishizaka's part, as he set up the first research labs and coped early on with the departure of the institute's first president. In administering the institute as in science, Teruko's people skills provided enormous support. "In science they were partners," says Altman. "But once they got here, Terry softened some of Kimi's rough edges. If there were personal issues with faculty or staff, she took care of that."

One concern critical to both was making sure colleagues felt like family. Altman recalls that in the institute's early years, the Ishizakis threw a yearly Christmas party and would personally buy presents for all the children of the staff. "I really admired them both," he said. "They were in large part responsible for the great home I found at this institute."

Kawakami, who co-authored papers with the Ishizakas in the early 90's and still focuses on mast cell signaling, concurs. "Kimi and Terry succeeded in making this initially small group of scientists and administrative folks extremely interactive, almost as an extended family," he says. "This warm and collegial environment has been sustained thought the entire history of the institute."

Science, like any profession crowded with overachievers, is ferociously competitive: other institutes may attain the level of scientific prestige that now defines LJI, but achieving that and collegiality is downright extraordinary. Thus, Ishizaka's legacy as a leader is every bit as enduring as his work at the lab bench:  "I believed that best way to increase productivity was to encourage mutual communication between investigators by exchange of knowledge in their specialties," he once said. "We were very pleased that they helped rather than competed with each other."

Ishizaka won numerous scientific prizes for discovering IgE. Among them were the 1972 Passano Award and the 1973 Gairdner Foundation International Award, both shared with Teruko; election in 1983 to the National Academy of Sciences; the 1974 Order of Culture, which is the most prestigious scientific award in Japan; and the 1985 American College of Physicians Award for Achievement in Medical Science. After he retired, he won the 2000 Japan Prize for achievements in science and enhancing worldwide prosperity from the Science and Technology Foundation of Japan. In 1984-5, Ishizaka was also the first foreign-born individual elected to serve as President of the American Association of Immunologists.

Ishizaka spent almost his entire scientific career working in the US, but he never forgot his origins and put enormous energy into training young investigators, many from Japan. In addition to those recruited to LJI, Ishizaka mentored several young immunologists in Denver and Baltimore who later became very prominent scientists: among them, Kiyoshi Takatsu, who discovered the allergic cytokine IL-5; Tadamitsu Kishimoto, who discovered IL-6, a cytokine important for inflammatory responses such as those causing rheumatoid arthritis; and (the late) Tomio Tada, who first proposed a class of T cells with suppressor function and later became a playwright.

Born in 1925 in Tokyo, Ishizaka received both MD and PhD degrees from University of Tokyo. After spending nearly his entire career in the U.S., including a postdoctoral fellowship at the California Institute of Technology in the late 50's, he returned to Japan when he retired as Founding Scientific Director and President of LJI in 1996. He and Teruko resided in Yamagata City, her hometown in northern Japan. At the time of his death he served as LJI President Emeritus and was on the Board of Directors as a Director Emeritus.

Reflecting on his time at LJI, Ishizaka once wrote, "Three years after establishment of LJI, some visitors commented to me, 'This institute is a utopia for young scientists.' This was the best comment I received while we were at LJI."

Dr. Ishizaka is survived by Teruko, his wife of 68 years, and by their son Yutaka Ishizaka, of Weston, Massachusetts.