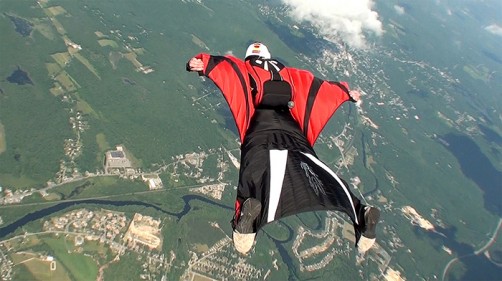 Newswise — Researchers from Leeds Beckett University are challenging the myth that extreme sports enthusiasts push themselves to the max and take risks no matter what the consequences.

The research titled ‘Leave your ego at the door’, which is published in Frontiers in Psychology, looks at the extreme sport, wingsuit proximity flying. This is a relatively new parachute sport which involves a specifically designed jumpsuit that facilitates forward motion and directional control. It is considered the most dangerous parachute sport as it involves flying close to structures at speeds of over 200mph, where a mistake or accident would most likely result in death.

Explaining the research findings, Dr Eric Brymer, a Reader in the Carnegie School of Sport, said: “When you think of the people involved in such extreme sports, you tend to think of risk takers who push themselves to the limit, however what this research has found is that this is far from the truth. The pilots we spoke to are careful, logical and don’t take any unnecessary risks. They are the opposite to what you would expect.”

During the research six wingsuit flying pilots from across Europe were interviewed about their experiences. The key themes that emerged were know they self; know thy skills; know the environment and tame the ‘inner animal’.

“In a sport like ours it’s a question of survival. If you’re not perfectly in the present moment, if you’re not ultra-connected with your environment, like an animal who’s hunting, you take many more risks.”

Another wingsuit flying pilot, Christopher, talked about pacing yourself: “If you’re pushing your own boundaries too quickly then you’ll be like a horse with blinkers on. I’d say probably it’s not about having big balls anymore, because the technology is so good. But it’s about arming yourself with knowledge and longevity.

Another pilot, Pinky, agreed: “You have to know your limits, otherwise you are just out of control.”

Dr Brymer added: “Contrary to what people might think, wingsuit flying pilots’ stories do not revolve around conquering and overcoming the environment or the weather conditions, but instead they portray a sensitivity and responsiveness to what is going on around them.

“Self-knowledge, the ability to tune into the environment and the courage to walk away are clearly important elements for the safe and optimal execution of proximity flying. The pilots we spoke to highlighted the importance of values, of a proactive process of tuning into the self and the environment before flying and of an ongoing process during flight; the ultimate aim being to live to fly another day.

“Macho attributes are not required and focusing on performance outcomes can result in reduced awareness of capabilities which ultimately leads to a greater danger.”

“Wingsuit pilots’ stories of their experiences differ markedly from the dominant performance narrative in sport.”

Dr Eric Brymer specialises in researching the reciprocal nature of wellbeing outcomes from nature-based activities. He holds a PhD in Psychology with Outdoor and Adventure Studies, a Master’s degree in Applied Sport and Exercise Psychology and postgraduate degrees in Education and Business. He also holds international research positions in health and outdoor studies. Eric has been involved in the outdoor and adventure field for over 30 years.