Less Is More: Exposure to Stimuli for Overcoming Phobia 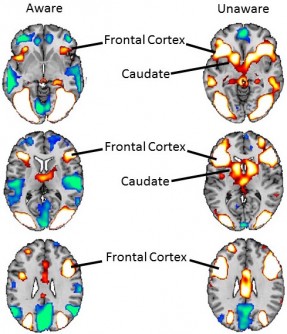 Brain activity of spider phobic people during repeated presentation of pictures of spiders - when they were aware of them (left column), and when they were not aware of them (right column). The phobic people processed t​he spider pictures significantly more when they were not aware of them, particularly in brain systems (including frontal cortex and caudate nucleus) that support regulation of fear and its associated behavioral responses.​ These are 2D slices positioned parallel to the floor in a standing person, with the forehead at the top and the back of the head at the bottom of each slice. 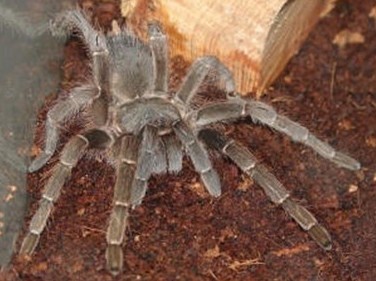 Newswise — A team of investigators, led by Bradley S. Peterson, MD, director of the Institute for the Developing Mind at Children’s Hospital Los Angeles, and Paul Siegel, PhD, associate professor of psychology at Purchase College of the State University of New York, have found that exposure to phobic images without conscious awareness is more effective than longer, conscious exposure for reducing fear. The investigators used fMRI to determine that areas of the brain involved in fear processing were much more strongly activated by unconscious exposure. Results of the study will be published in the journal, Human Brain Mapping, on February 6, 2017.

“Although we expected – and observed – activation of the neural regions that process fear,” said Peterson, who is also professor of pediatrics and psychiatry at the Keck School of Medicine of the University of Southern California, “we also found activation in regions that regulate the emotional and behavioral responses to fear—reducing the conscious experience of fear.”

While “phobia” is often defined as an irrational fear, many of the stimuli that produce a phobic response actually have an evolutionary basis that biologically prepares humans to fear them. For this study, the investigators used spiders – a common fear stimulus. They enrolled 21 spider-phobic and 21 non-phobic control participants, all young adult women. Women were selected because previous research has shown that 75 to 80 percent of all people who experience phobias are women.

All participants experienced three conditions that included viewing control images not associated with phobias (flowers) and phobia-inducing images (spiders) at two levels of exposure – very brief (without awareness) and longer duration (clearly visible). The very brief exposure was accomplished through a technique known as backward masking, where a target image is shown very briefly and then immediately followed by a non-target image or “mask” that prevents recognition of the target.

In participants with phobia, very brief exposure to spider images strongly activated the subcortical regions of the brain involved in immediate fear processing. Yet they did not experience fear consciously, apparently because the very brief exposures also activated brain regions that regulate fear. Clearly visible exposure to the spider images, by contrast, deactivated areas of the brain that regulate fear responses, inducing the conscious experience of fear.

“Counter-intuitively, our study showed that the brain is better able to process feared stimuli when they are presented without conscious awareness,” said Siegel, who is first author on the study. “Our findings suggest that phobic people may be better prepared to face their fears if at first they are not consciously aware that they’ve faced them.”

Peterson added that he saw potential for using this technique to treat children and adolescents with anxiety disorders. Current therapies are based on directly confronting the feared stimulus, which can cause young people to experience significant emotional distress.

Additional contributors to the study include Richard Warren and Lilly Murray, Purchase College, SUNY; Zhishun Wang and Jie Yang, Columbia University; Don Cohen, New York University; and Jason Anderson, University of California, Santa Barbara. The study was funded by a grant from the National Institute of Mental Health (7R21MH102564-02). Supplemental funding was provided by the American Psychoanalytic Association, the Society for Neuropsychoanalysis, the International Psychoanalytic Association and Purchase College.

About Children’s Hospital Los AngelesChildren's Hospital Los Angeles has been named the best children’s hospital in California and among the top 10 in the nation for clinical excellence with its selection to the prestigious U.S. News & World Report Honor Roll. Children’s Hospital is home to The Saban Research Institute, one of the largest and most productive pediatric research facilities in the United States. Children’s Hospital is also one of America's premier teaching hospitals through its affiliation since 1932 with the Keck School of Medicine of the University of Southern California. For more information, visit CHLA.org. Follow us on Twitter, Facebook, YouTube and LinkedIn, or visit our blog at http://www.researchlablog.org/.