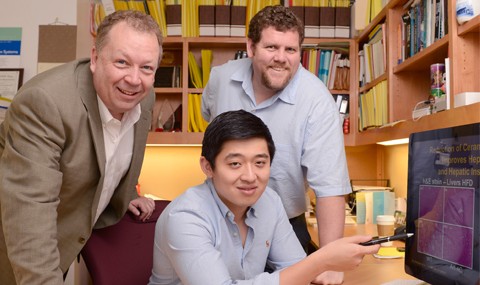 Insulin is a crucial hormone that helps the body convert sugar into energy, absorb nutrients, and reduce the storage of sugars as fat. Poor insulin sensitivity reduces the effectiveness of these processes and results in diabetes and fatty liver disease. UT Southwestern researchers showed that introducing an enzyme called ceramidase in diabetic mice returned their insulin sensitivity to normal.

Though no such therapy currently exists, Dr. Scherer said a drug form of the enzyme ceramidase likely could be developed.

The findings are outlined in the journal Cell Metabolism.

When more fatty acids are consumed than the body burns off, some excess fat is converted to ceramide. When too much ceramide builds up, the lipid interferes with insulin signaling, resulting in insulin resistance and possibly diabetes or nonalcoholic fatty liver disease.

“It is a nasty lipid at times,” said Dr. Scherer, Professor of Internal Medicine and Cell Biology who holds the Gifford O. Touchstone, Jr. and Randolph G. Touchstone Distinguished Chair in Diabetes Research. “If we can lower ceramide, then we believe the body’s metabolism will return to normal.”

In their new study, the scientists showed that inducing ceramidase in the diabetic mice triggered degradation of ceramide in both fat tissue and the liver. This action then normalized insulin sensitivity and had the same beneficial effect when ceramidase was induced in the liver or fat cells. Excess ceramide was converted into sphingosine, another lipid byproduct. Both ceramide and sphingosine are energy sources, but the two lipids have contrary metabolic signaling power. Too much ceramide signals insulin resistance and inflammation, while more sphingosine does the opposite.

“This research suggests the existence of a rapidly acting “cross talk” between liver and adipose (fat) tissue in which ceramide and sphingosine critically regulate glucose metabolism and the uptake of lipids by the liver,” Dr. Scherer said.

The research was funded by the National Institutes of Health, the Juvenile Diabetes Research Foundation, and American Heart Association.

The Touchstone Center for Diabetes Research was established with a gift from Mrs. Lucian Touchstone to support the development of new treatments aimed at ameliorating and ultimately preventing this disease.