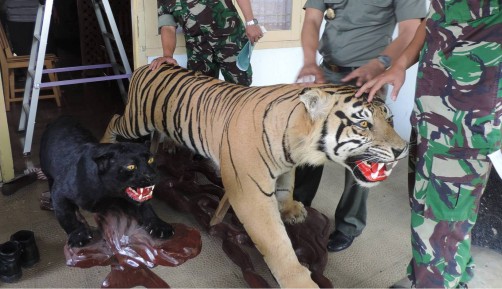 A stuffed Sumatran tiger and stuffed leopard. These items were seized during the recent arrest of an illegal wildlife trafficker in Indonesia. The suspect has allegedly sold more than 100 stuffed tigers over a ten-year period.

Newswise — The South Sumatra Military Police, South Sumatra Provincial Natural Resource Conservation Office (BKSDA), and the Wildlife Conservation Society’s Wildlife Crimes Unit (WCU) announced today the recent arrest of a major wildlife trafficker illegally trading in tiger parts and other protected wildlife in Indonesia. The suspect has allegedly sold more than 100 stuffed tigers over a ten-year period. The trafficker, identified as KSM, allegedly traded the illegal goods to buyers in Southern Sumatra, Kalimantan, Sulawesi, and to a tiger “middleman” in Jakarta. KSM has since confessed that he purchased tiger skins and stuffed tigers in Lampung, Bengkulu, Jambi, and North Sumatra to supply demand in Jakarta and Java.

The arrest took place during a transaction involving the shipment of one stuffed tiger, one stuffed Javan leopard, and four stuffed sambar deer worth $16,000 USD on the illegal market.

The suspect was apprehended in the city of Palembang, the provincial capital of South Sumatra, located approximately 200 kilometers from the northern part of Bukit Barisan Selatan National Park. The park is one of the most important sites globally for Sumatran tigers.

The suspect’s arrest concluded a long investigation that began in 2009 with the arrest of a middleman by the Criminal Investigation Division (CID) of the Indonesian National police assisted by WCU. Following that arrest, authorities pursued KSM –who they linked to the middleman in a continuing investigation.

Noviar Andayani, Country Director of Wildlife Conservation Society (WCS) Indonesia Program said, “We see that law enforcement does not only indicate the Indonesian government’s strong commitment, but also demonstrates a strategic move to stop the tiger trade chain from South Sumatra. WCS has committed to sustainably supporting the government’s efforts to protect key wildlife, such as the Sumatran tiger, through a multi-layered effort, from protection in its habitat to technical support in effective, fair and transparent law enforcement.” Sumatran tigers (Panthera tigris sumatrae), are a critically endangered tiger sub-species that can only be found in Indonesia. Poaching and trading of these animals is a violation of Indonesian law, with violators subject to a maximum of 5 years in prison and a $10,000 fine.

Nunu Anugrah, Head of the BKSDA, said, “We are committed to preserving protected species in Indonesia through systematic conservation efforts based on education, public awareness, and law enforcement. BKSDA aims to ensure that the law enforcement process against the perpetrators of protected wildlife runs optimally and provides a deterrent effect. Such a deterrent is critical to conserving priority programs—such as Sustaining Wildlife Populations and Habitats— that aims to increase the population of 35 priority species (including the Sumatran tiger and elephant) by 10 percent in the next five years.” “This arrest of a major trader in tigers and other wildlife by Indonesian authorities is showing the world that Indonesia is serious about protecting this species from wildlife trafficking,” said Joe Walston, WCS Vice President of Field Conservation. “We commend the Government of Indonesia in making these arrests.” WCS’s Wildlife Crimes Unit is supported by the Liz Claiborne and Art Ortenberg Foundation, Fondation Segré, the United States Fish and Wildlife Service Multinational Species Conservation Funds, the AZA Tiger Species Survival Plan’s Tiger Conservation Campaign, the John D. and Catherine T. MacArthur Foundation, and USAID-Change for Justice.