UNC School of Medicine, the World Health Organization, and the Ethiopian Public Health Institute conducted a joint study to find that malaria parasites are spreading undetected across the Horn of Africa, posing a major health threat to the region. 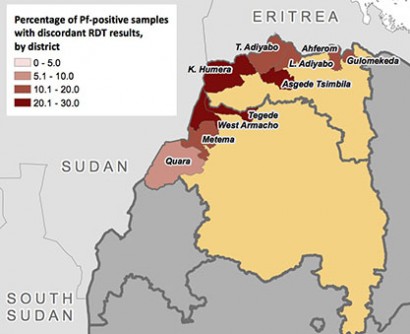 Map of Ethiopia: In red, the percent of positive malaria samples evading detection due to genetic mutation of the parasite Plasmodium falciparum. 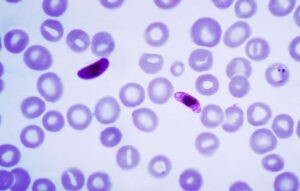 Plasmodium falciparum, the parasite that causes most malaria illnesses and deaths.

Newswise — CHAPEL HILL, NC – A major tool against malaria in Africa has been the use of rapid diagnostic tests, which have been part of the “test-treat-track” strategy in Ethiopia, the second most-populated country in Africa. But researchers studying blood samples from more than 12,000 individuals in Ethiopia now estimate these tests missed nearly 10% of malaria cases caused by the parasite Plasmodium falciparum, the most common cause of malaria cases and deaths.

The research, published in Nature Microbiology, showed that two genetic mutations to the parasite allow it to escape detection.

“This is a serious problem for malaria control efforts and a reminder that pathogens are very capable of adapting to survive,” said senior author Jonathan B. Parr, MD, assistant professor in the division of infectious diseases at the UNC School of Medicine. “Surveillance across the Horn of Africa and alternative malaria diagnostic approaches in affected regions are urgently needed.”

Co-corresponding authors are Sindew M. Feleke, MSc, at the Ethiopian Public Health Institute, Jane Cunningham, MD, at the WHO, and Dr. Parr.

This research project was conducted in partnership with the Ethiopian Public Health Institute and the World Health Organization. The research team enrolled 12,572 participants along Ethiopia’s border with Eritrea, Sudan, and South Sudan, using RDTs, PCR diagnostics, an ultrasensitive immunoassay for antigen detection, and next-generation sequencing to find that P. falciparum lacking the genes histidine-rich protein 2 (pfhrp2) and histidine-rich protein 3 (pfhrp3) escape detection by the RDTs and appear to have spread rapidly.

In collaboration with Brown University’s Jeffrey A. Bailey, MD, PhD, and Ozkan Aydemir, PhD, the researchers applied a molecular sequencing approach to pinpoint the particular deletion patterns of these genetic mutations. “Our method allowed us to study the rich genomic information surrounding these genes in fine detail and at scale, facilitating the identification of evolutionary origins of these deletions,” Aydemir said.

“Our work indicates that prhrp3 deletions have arisen independently multiple times over the course of years,” said Parr, who is a member of the UNC Institute for Global Health and Infectious Diseases. “We also found signs that RDT-based testing and treatment are driving a recent rise in pfhrp2 deletion mutation prevalence, allowing parasites to escape detection.”

In the Nature Microbiology paper, the authors ask, “What other advantages might pfhrp2/3-deleted parasites have over those with intact genes? Our limited understanding of the biology of these deletions makes this question hard to answer.” But the authors posit several lines of inquiry in the paper, though one thing is certain.

Parr said, “We found clear evidence that parasites have recently evolved to escape detection by malaria rapid diagnostic tests along Ethiopia’s borders with Sudan and Eritrea. False-negative results were common in multiple sites and will lead to misdiagnosis and malaria deaths without intervention.”

“The results of this joint research effort have prompted us to change our diagnostic testing policies from HRP2/3-detecting RDTs to non-HRP2/3 targeted RDTs in the most affected regions of Ethiopia,” Feleke said.

Also, along with several other unpublished reports, this study prompted the WHO to issue a statement of concern.

Cunningham, said, “The WHO recommends that all malaria endemic countries start and maintain surveillance for pfhrp2/3 deletions and respond appropriately when they are confirmed, in order to prevent unnecessary morbidity and deaths and to safeguard inroads that have been made towards malaria elimination, particularly in sub-Saharan Africa.”

Other authors of the Nature Microbiology paper are Emily N. Reichert, Chris Hennelly, Madeline Denton, Corinna Keeler, and Jonathan J. Juliano at the UNC Institute for Global Health and Infectious Diseases; Ebba Abate, Hussein Mohammed, Bokretsion G. Brhane, and Kalkidan Mekete, at the Ethiopian Public Health Institute; Hassen Mamo and Beyene Petros at the Addis Abada University in Ethiopia; Hiwot Solomon at the Ethiopian Ministry of Health; Nicholas J. Hathaway at the University of Massachusetts School of Medicine; Jeffrey A. Bailey and Ozkan Aydemir at Brown University; and Eric Rogier at the Centers for Disease Control and Prevention.

This work was funded by the Global Fund to Fight AIDS, Tuberculosis, and Malaria through the Ministry of Health-Ethiopia and the Bill and Melinda Gates Foundation through the World Health Organization. It was also partially supported by MSF Holland, which supported field work in Gambella Region, the Doris Duke Charitable Foundation, the American Society for Tropical Medicine and Hygiene-Burroughs Wellcome Foundation, and the US National Institutes of Health.