Global climate-demography vulnerability index (CDVI) -Local vulnerability of human populations to climate change based on ecological and demographic models. The regions in red are expected to be most negatively impacted by climate change. White regions correspond to human density values of zero in the global population database. 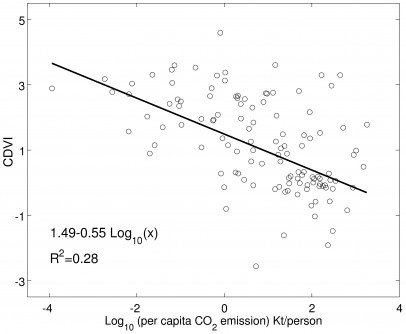 Newswise — Researchers already study how various species of plants and animals migrate in response to climate change. Now, Jason Samson, a PhD candidate in McGill University’s Department of Natural Resource Sciences, has taken the innovative step of using the same analytic tools to measure the impact of climate change on human populations. Samson and fellow researchers combined climate change data with censuses covering close to 97 per-cent of the world’s population in order to forecast potential changes in local populations for 2050.

Samson’s team found that if populations continue to increase at the expected rates, those who are likely to be the most vulnerable to climate change are the people living in low-latitude, hot regions of the world, places like central South America, the Arabian Peninsula and much of Africa. In these areas, a relatively small increase in temperature will have serious consequences on a region’s ability to sustain a growing population.”It makes sense that the low latitude tropical regions should be more vulnerable because the people there already experience extremely hot conditions which make agriculture challenging. An increase in temperature over the next few decades will only make their lives more difficult in a variety of ways,” says Samson.

This contrasts with Samson’s predictions about the impact of climate change on human populations in the high-latitude more temperate zones of the world, where the temperature change is expected to be greater. Because the spread of human populations along with their activities are already more constrained by the cooler conditions in these regions, the researchers expect that climate change will have less of an impact on people living in these areas.

The study also points to clear inequities in the causes and consequences of climate change: the countries that have contributed the least to climate change, based on their average per-capita carbon dioxide emissions, are nevertheless predicted to be the most vulnerable to its impacts. “Take Somalia for instance,” suggests Samson.”Because it’s so hot there, it’s already very difficult to grow things, and it will only become more difficult if the temperature rises. It’s also clear that Somalia is not a big contributor of greenhouse gas to the atmosphere. Now thanks to this map, we have concrete quantitative evidence of the disparity between the causes and the consequences of climate change at a national level.”

Samson anticipates this data could be useful for decision makers around the world in the ongoing international negotiations around climate change.”

The research was funded by the Natural Sciences and Engineering Council of Canada (NSERC).

A copy of the full article is available on request.

Caption: Global climate-demography vulnerability index (CDVI) -Local vulnerability of human populations to climate change based on ecological and demographic models. The regions in red are expected to be most negatively impacted by climate change. White regions correspond to human density values of zero in the global population database. 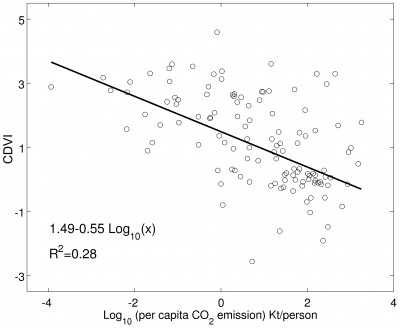