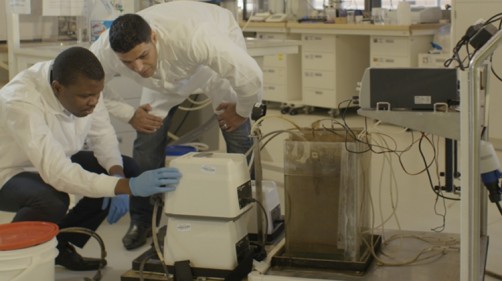 Innovation in wastewater treatment and reuse led by Dr. Shadi Hasan and his team at Masdar Institute.

Newswise — The all-in-one wastewater treatment system developed by Masdar Institute’s Dr. Shadi Wajih Hasan, Assistant Professor of Chemical and Environmental Engineering, is being further enhanced in an effort to advance the field of wastewater purification.

Dr. Hasan’s advanced system, known as a submerged membrane electro-bioreactor, or an SMEBR, is an integrated hybrid wastewater treatment unit that is significantly more efficient at treating wastewater and considerably less susceptible to fouling, which is the unwanted build-up of salt and bio-material on a membrane that reduces the membrane’s ability to filter impurities.

An SMEBR is an electrically enhanced membrane bioreactor (MBR), which is a novel wastewater treatment technology. While an MBR combines membrane processes like microfiltration with biological treatment processes to purify wastewater for a high quality effluent, an SMEBR adds a third electrokinetic process, which employs an electric current to remove various contaminants from wastewater.

The SMEBR is able to generate higher quality treated wastewater while consuming less energy than an MBR, as the inclusion of the enhanced biological and electrokinetic processes reduce the system’s dependency on primary- and secondary-related treatment operations.

Dr. Hasan contributed to the development of the first SMEBR system at a pilot scale during his doctoral studies at the University of Concordia in Canada and has continued his work to enhance and improve the SMEBR while at MI, with a focus on optimizing the system for efficient operation in the UAE. Dr. Hasan and his colleagues have published over 20 papers on this topic in international journals and conference proceedings like Nature Scientific Reports, Bioresource Technology, Chemosphere, Electrochimica Acta, Environmental Management and Environmental Sciences. One of those articles, which is co-authored by his PhD student Adewale Giwa, has remained in the first place among the top 20 articles in the BioMedLib search engine in the domain of membrane bioreactors for wastewater treatment since 2015.

Interest t in Dr. Hasan’s SMEBR work is also evidenced by the recent publication of a review article on the topic of electrochemical processes with MBRs, which was published in the journal Frontiers in Environmental Science in August 2016 by a team of researchers from Italy and the Philippines.

“The publishing of a review article that focuses heavily on my SMEBR work reflects the fact that the field is becoming more important globally and that several researchers around the world have started working with the same wastewater technology,” Dr. Hasan remarked.

In his efforts to further advance the lab-scale SMEBR system developed at MI, Dr. Hasan has worked with Giwa to develop the first numerical computer-based model of the SMEBR. The model simulates the removal process of contaminants, such as organic and inorganic compounds, as wastewater passes through the SMEBR unit and models the effects of the SMEBR processes on the quality of the effluent, which is the discharged water.

The SMEBR model showed that the effluent produced by the novel technology had the lowest concentrations of ammonia, nitrogen, phosphorous and metals compared to the effluent produced by the two other most common treatment processes, including the conventional activated sludge process and the MBR process. The model was then validated through experimental work that produced similar results to what the model predicted.

“To create our model, we had to develop different models that represent each of the three treatment processes used in a SMEBR system and integrate them so that they work collaboratively to predict the performance of the reactor, and this has never been done before,” Dr. Hasan explained.

The model enables a better understanding of how an SMEBR system will react to different wastewater qualities and would be particularly useful for optimizing the design and construction of wastewater treatment plants that plan to leverage SMEBR technologies.

To further advance the efficacy and efficiency of the SMEBR technology to produce high quality water, Dr. Hasan is working with MSc in Chemical Engineering student Menatalla Ahmed to enhance the hybrid system with a second treatment cycle – a post-treatment process that utilizes nanotechnology.

The project was initiated in collaboration with researchers from the Massachusetts Institute of Technology (MIT) with the intent to improve the quality of the effluent produced by the SMEBR system by coupling nanowire filtration – which are filters made of thin manganese dioxide and titanium dioxide nanoparticles – as a post-treatment process.

“The nanowire material developed through this project has already demonstrated a strong ability to eliminate the pollution caused by the presence of heavy metals and organic contents in wastewater,” Dr. Hasan said. “An integration technology combining this with the SMEBR system offers great potential for wastewater treatment.”

Currently, Masdar Institute MSc and PhD students are also testing other nanomaterials to optimize the post-treatment membrane based nano-filtration. Dr. Hasan is currently working to integrate the SMEBR unit and nano-filtration to develop a prototype to begin pilot testing the integrated system.

By leveraging Dr. Hasan’s expertise, Masdar Institute is developing an innovative wastewater treatment system and is contributing to the advancement of scientific knowledge of novel water technologies.

The work being conducted by Dr. Hasan and his team is supporting the development of a resilient water infrastructure in the UAE while strengthening the country’s position as a global leader in treated wastewater reuse.