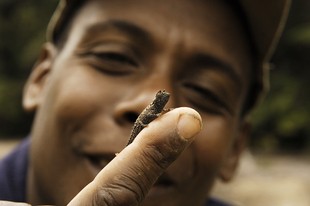 A stump-tailed chameleon from Madagascar.

Newswise — Using data from thousands of species of lemurs, frogs, geckos, butterflies, ants, and plants, scientists from the Bronx Zoo-based Wildlife Conservation Society, University of California, Berkeley and other organizations have completed an analytical colossus for Madagascar that will guide plans to safeguard the island's unique natural heritage. The massive study is the cover story in the most recent edition of Science.

The study is unprecedented in terms of not only the number of species examined (some 2,315 species in six groups), but also because of the project's scale and resolution. The biodiversity, climate and habitat of the entire 226,657 square-mile island, which is nearly a third larger than the state of California, were examined. The maps generated from the data analyses have a resolution of less than a square kilometer.

"While some of the key areas of biodiversity are under protection, many are not. This study will help direct conservation plans to help protect the most species possible, with special consideration given to those animals and plants that are most endangered," said the study's lead co-author Dr. Claire Kremen, an associate conservationist with the Wildlife Conservation Society and UC Berkeley assistant professor.

Unlike conservation projects that only focus on one or a handful of species to identify conservation priorities, this study used a number of new techniques to identify areas most important for saving the highest percentage of fauna and flora. The task was made difficult by the complex patterns of distribution for the island's many unique plants and animals, many of which do not overlap. To address the challenge, researchers started with data on all species in the six groups, such as distribution, conservation status, and other factors. They then added data on habitat suitability from remote sensing images from satellites, and several layers of climatic information including average monthly temperature and rainfall.

The result of the study: a data-driven map that highlights the most important areas to protect. While the analysis emphasized the importance of protecting an enormous sweep of species of several groups, the model also was tailored to afford greater priority to species that have suffered significant range reductions between the years of 1950 to 2000. For example, two types of lemurs that were given higher ratings due to range reductions were the Coquerel's sifaka (listed as Critically Endangered by IUCN) and the Decken's sifaka (listed as Vulnerable).

On a national level, the study will help the Malagasy government reach a commitment made at the World Parks Congress in 2003 when President Marc Ravalomanana pledged to triple Madagascar's protected area network to 10 percent of its land mass. To date, it has already established over six percent.

As natural habitats shrink in the face of increasing pressures from people, picking which areas to safeguard for the future is a huge challenge around the world but particularly in a poor country like Madagascar. This study is essential to Madagascar's future " home to 2 percent of the world's biodiversity and the home to the largest number of unique species. The analysis done in the study creates a science-based, practical roadmap for choosing the most important areas to protect.

The result of the analysis produces a conservation plan that will build upon the 6.3 percent of the island's land mass under some form of natural reserve status, which currently protects some 70 percent of the species in the study. The study recommends how to expand the reserve system within the target of an additional 3.7 percent to boost the number of protected target species to 100 percent. Further, the study identifies completely new areas for conservation, specifically central plateau massifs and coastal forests that lack large forest blocks, but contain high degrees of species richness and uniqueness.

"This study will serve as a blueprint to help Madagascar achieve its ambitious conservation goals in the most effective way possible," said Dr. Steven E. Sanderson, President and CEO of the Wildlife Conservation Society.

"Madagascar has become a global leader in saving wildlife and wild lands, and we're enormously proud to support the Malagasy commitment to protect its natural heritage. WCS has had a presence in Madagascar since 1990, and will soon bring the beauty of Madagascar and the value of our conservation work on the island through a fabulous new exhibit at our Bronx Zoo headquarters."

The Wildlife Conservation Society, which operates field projects throughout the island nation, will open Madagascar! on June 19th " a new exhibit at its Bronx Zoo headquarters that showcases the country's amazing biodiversity including lemurs, radiated tortoises and crocodiles. The exhibit will be a state-of-the-art energy efficient, green building, and the first land-marked building in New York to receive a Leadership in Energy and Environmental Design (LEED) gold certification.

"By combining huge data sets with the latest available software programs, we can identify conservation priorities with a high degree of precision on truly huge scales," said lead co-author Alison Cameron of UC-Berkeley, who works closely with WCS and government agencies to bring about conservation in Madagascar. "Most importantly, we can export this model to other areas of critical conservation importance."

The project is also a powerful example of how world class organizations that specialize in research, innovative thinking, and pragmatic field conservation can come together to make a significant contribution to the future of the worlds' plant and animal life. The researchers used software specially developed for this project, in collaboration with a computer science researcher at AT&T, to estimate the complete range of each species.

Steven Phillips of AT&T Labs, one of the co-authors of the study, said, "At AT&T Labs, it is very gratifying to have the opportunity to apply the same research we use to plan and manage telecommunication networks to address pressing ecological challenges. AT&T Labs encourages me and my fellow researchers to pursue innovative new applications for advanced technologies, and we are proud to have had the opportunity to contribute to an effort that Madagascar is making to conserve its natural heritage."

The study was funded in part by a grant from the MacArthur Foundation.The Wildlife Conservation Society saves wildlife and wild places worldwide. We do so through science, global conservation, education and the management of the world's largest system of urban wildlife parks, led by the flagship Bronx Zoo. Together these activities change attitudes towards nature and help people imagine wildlife and humans living in harmony. WCS is committed to this mission because it is essential to the integrity of life on Earth. Visit http://www.wcs.org