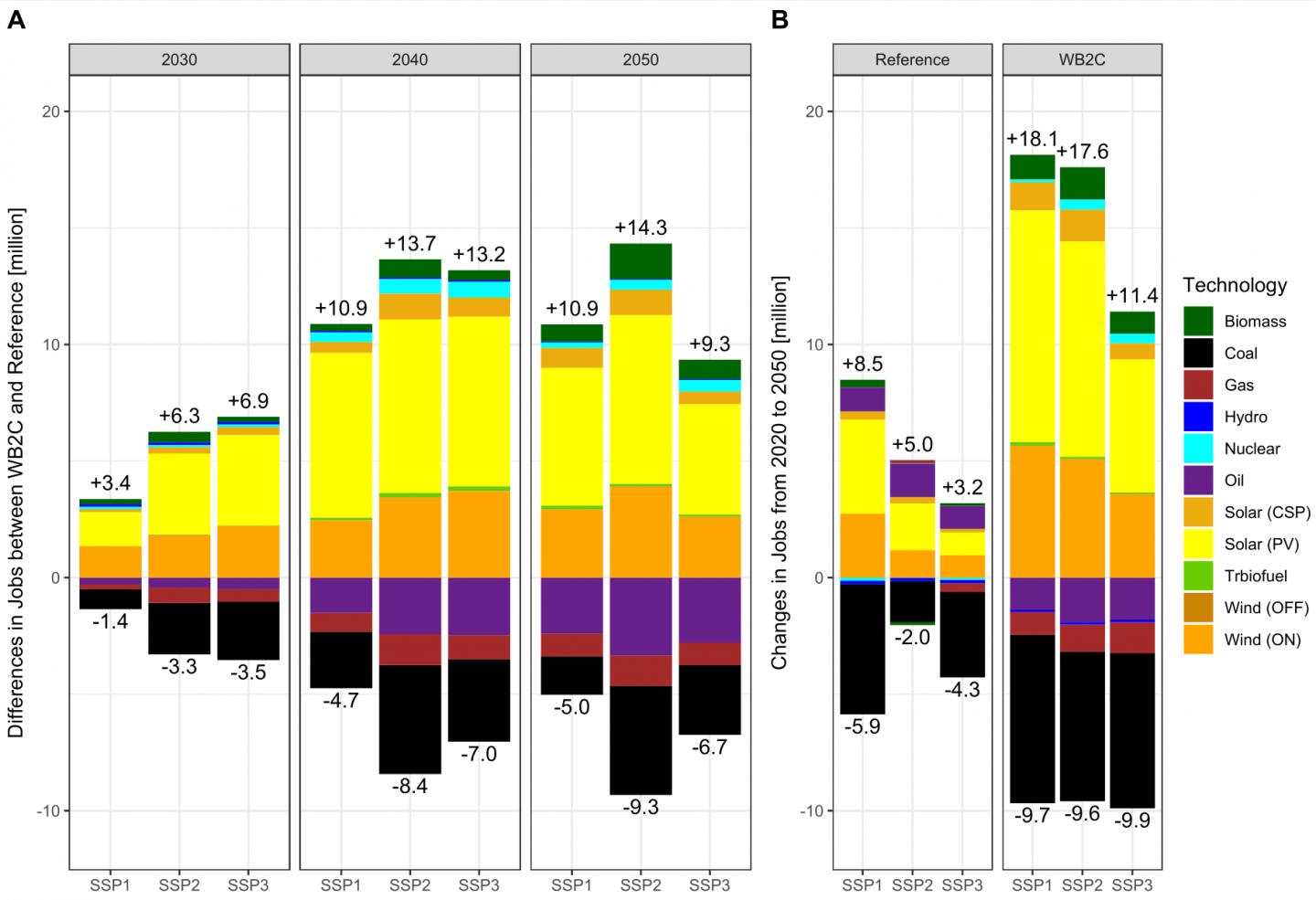 The figure shows the changes in energy sector jobs by energy technology comparing different scenarios (see axis description) and across the different SSPs.

Newswise — Researchers created a global dataset of job footprints in 50 countries and used a model to investigate how trying to meet the Paris Agreement global climate target of staying well below 2°C would affect energy sector jobs. They found that action to reach said target would increase net jobs by about 8 million by 2050, primarily due to gains in the solar and wind industries. The analysis appears July 23 in the journal One Earth.

"Currently, an estimated 18 million people work in the energy industries--a number that is likely to increase, not decrease, to 26 million or by over 50% if we reach our global climate targets," says corresponding author Johannes Emmerling (@JohannesEmm), an environmental economist at the RFF-CMCC European Institute on Economics and the Environment in Italy. "Manufacturing and installation of renewable energy sources could potentially become about one third of the total of these jobs, for which countries can also compete in terms of location."

The study conducted by Emmerling and colleagues is the first based on a comprehensive dataset of over 50 countries, including major fossil fuel producing economies. The team combined this dataset with an integrated assessment model to make job projections. The model helps see how the development of humans and the choices societies make affect each other. Almost all previous analysis relied on jobs data for OECD countries and generalized the results for the rest of the world using a multiplier.

"The energy transition is increasingly being studied with very detailed models, spatial resolutions, timescales, and technological details," says Emmerling. "Yet, the human dimension, energy access, poverty, and also distributional and employment implications are often considered at a high level of detail. We contributed to this gap by collecting and applying a large dataset across many countries and technologies that can also be used in other applications."

In the researcher's model, of the total jobs in 2050, 84% would be in the renewables sector, 11% in fossil fuels, and 5% in nuclear. While fossil fuel extraction jobs, which constitute 80% of current fossil fuel jobs, would rapidly decline, these losses will be compensated by gains in solar and wind manufacturing jobs.

"Extraction sector jobs are more susceptible to decarbonization, so there needs to be just transition policies in place," says first author Sandeep Pai (@Sandeeppaii), who recently graduated with a Ph.D. in Resources, Environment, and Sustainability at The University of British Columbia. "For example, the mobility of manufacturing jobs will be useful in areas where decarbonization is rife. In many cases, fossil fuel workers also hold political influence because of their history and high rates of unionization among others, so as we move to low carbon sources, it is important to have a plan in place for the general acceptability of climate policies."

The researcher's next goal is to explore the shifts in skill levels, education requirements, and wages that may result from trying to meet the global climate target of the Paris Agreement. They also anticipate that, since this is accessible to all these different groups around the world, it will inspire other data analysts to use it for running multiple scenarios, further clarifying the extent of jobs.

This work was supported by the "Contractions project" funded by the Norwegian Research Council and the European Union's Horizon 2020 research and innovation program.

One Earth (@OneEarth_CP), published by Cell Press, is a monthly journal that features papers from the fields of natural, social, and applied sciences. One Earth is the home for high-quality research that seeks to understand and address today's environmental grand challenges, publishing across the spectrum of environmental change and sustainability science.