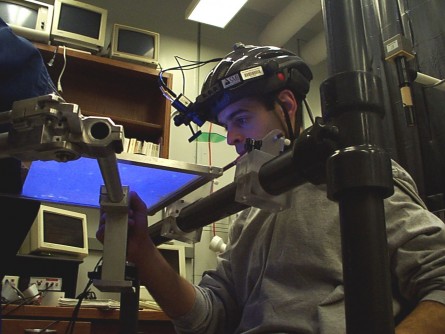 Caption: The experimental setup: Volunteers cannot see their hands, but they can see a dot of light that reflects their movements more or less accurately.

Newswise — Using a deceptively simple set of experiments, researchers at Johns Hopkins have learned why people learn an identical or similar task faster the second, third and subsequent time around. The reason: They are aided not only by memories of how to perform the task, but also by memories of the errors made the first time.

“In learning a new motor task, there appear to be two processes happening at once,” says Reza Shadmehr, Ph.D., a professor in the Department of Biomedical Engineering at the Johns Hopkins University School of Medicine. “One is the learning of the motor commands in the task, and the other is critiquing the learning, much the way a ‘coach’ behaves. Learning the next similar task goes faster, because the coach knows which errors are most worthy of attention. In effect, this second process leaves a memory of the errors that were experienced during the training, so the re-experience of those errors makes the learning go faster.”

Shadmehr says scientists who study motor control — how the brain pilots body movement — have long known that as people perform a task, like opening a door, their brains note small differences between how they expected the door to move and how it actually moved, and they use this information to perform the task more smoothly next time. Those small differences are scientifically termed “prediction errors,” and the process of learning from them is largely unconscious.

The surprise finding in the current study, described in Science Express on Aug. 14, is that not only do such errors train the brain to better perform a specific task, but they also teach it how to learn faster from errors, even when those errors are encountered in a completely different task. In this way, the brain can generalize from one task to another by keeping a memory of the errors.

To study errors and learning, Shadmehr’s team put volunteers in front of a joystick that was under a screen. Volunteers couldn’t see the joystick, but it was represented on the screen as a blue dot. A target was represented by a red dot, and as volunteers moved the joystick toward it, the blue dot could be programmed to move slightly off-kilter from where they pointed it, creating an error. Participants then adjusted their movement to compensate for the off-kilter movement and, after a few more trials, smoothly guided the joystick to its target.

In the study, the movement of the blue dot was rotated to the left or the right by larger or smaller amounts until it was a full 30 degrees off from the joystick’s movement. The research team found that volunteers responded more quickly to smaller errors that pushed them consistently in one direction and less to larger errors and those that went in the opposite direction of other feedback. “They learned to give the frequent errors more weight as learning cues, while discounting those that seemed like flukes,” says David Herzfeld, a graduate student in Shadmehr’s laboratory who led the study.

The results also have given Shadmehr a new perspective on his after-work tennis hobby. “I’m much better in my second five minutes of playing tennis than in my first five minutes, and I always assumed that was because my muscles had warmed up,” he says. “But now I wonder if warming up is really a chance for our brains to re-experience error.”

“This study represents a significant step toward understanding how we learn a motor skill,” says Daofen Chen, Ph.D., a program director at the National Institute of Neurological Disorders and Stroke. “The results may improve movement rehabilitation strategies for the many who have suffered strokes and other neuromotor injuries.”

The next step in the research, Shadmehr says, will be to find out which part of the brain is responsible for the “coaching” job of assigning weight to different types of error.

Other authors on the paper were Pavan A. Vaswani and Mollie K. Marko of the Johns Hopkins University School of Medicine.