• Three found guilty, sentenced to two years in prison, ordered to pay compensation of US$ 136,000 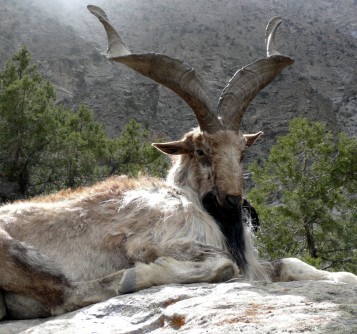 Newswise — The Wildlife Conservation Society (WCS) applauds the Government of Gilgit-Balitistan (GB) for the expeditious arrest and sentencing of markhor poachers in Astore District of the GB. Further, the penalties are of a severity that meets the seriousness of the offense, and are sure to send a message that will deter others from considering similar pilfering of Pakistan’s unique natural resources.

On December 28, 2017 at 3:00PM, Gilgit-Baltistan Parks and Wildlife Department and Community Wildlife Rangers of Bunji arrested three suspects for poaching markhors. The poachers were apprehended in the Bunji Conservancy of Astore District during the joint winter wildlife surveys conducted by the Parks and Wildlife Department, Bunji Conservation Committee and the WCS-Pakistan Program.

The suspects were detained with the meat, horns, and skin of two flare-horned markhor (one male and one female), along with a gun in their possession. This species of rare wild mountain goat (part of a group of ungulates known as Mountain Monarchs) is classified as Near Threatened by the International Union for Conservation of Nature (IUCN) Red List of Threatened Species, and on Appendix I of the Convention on International Trade in Endangered Species of Wild Fauna and Flora (CITES). Mr. Jehangir Khan, Divisional Forest Officer, and Mr. Shah Nawaz, Range Forest Officer, Astore, acted swiftly and confiscated all the illegally-obtained items along with the gun used in the hunt.

In a positive and unprecedented step, the Department rapidly prosecuted the offenders through the Forest and Wildlife Magistrate, Mr. Aftab Mehmood, and sentenced the individuals to two years in prison and to pay compensation of US$ 136,000—roughly the cost of legally hunting two trophy-sized markhor in the international market.

“Often we see penalties for poaching and wildlife crime ineffective as a deterrent because of lack of severity—there is little reason for repeat offenders to stop or for potential offenders not to engage in these nefarious activities,” said WCS-Pakistan Chief Technical Advisor Dr. Amjad Virk. “In this case, however, the penalties carry a strong message.”

Mr. Yaqoob Ali Khan, Conservator Parks and Wildlife, Government of Gilgit-Baltistan said, “These sentences give the guilty parties or others reason to think twice before poaching again in Gilgit-Baltistan.”

WCS works in the region with the Gilgit-Baltistan government and local communities performing joint wildlife surveys, and monitoring and engaging in other conservation related activities. WCS has trained government staff and over 100 Community Wildlife Rangers to protect forests and wildlife—leading to a 70 percent increase in what was an endangered and rapidly decreasing markhor population, and protection of other rare wildlife species and some of Pakistan’s remnant coniferous forests in Gilgit-Baltistan.

Fondation Segré supports WCS in its efforts to protect the Mountain Monarchs of Pakistan.