Microbial Activity in the Subsurface Contributes to Greenhouse Gas Fluxes 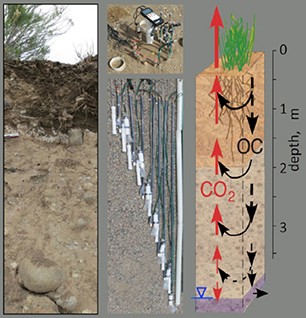 Most carbon dioxide emissions to the atmosphere come from plant roots and microbes that are found in the top 1 meter (approximately 3 feet) of the soil surface. However, deeper down, a large inventory of carbon supports an abundance of microorganisms that also release carbon dioxide. In this study, scientists built vertical profiles of carbon dioxide concentrations measured from the soil surface down to the water table in a semiarid floodplain. They determined microbes well below the rooting depth and above the water table contribute a significant amount of carbon dioxide to the total atmospheric emissions from the floodplain.

While carbon dioxide fluxes from microbial activity within shallow soils (< 1-m (3 ft) depth) are well studied, relatively little is known about carbon dioxide fluxes from microbes at greater depths. To determine the respiration rate of these microbes, scientists compared, measured, and calculated carbon dioxide fluxes from the floodplain of the U.S. Department of Energy Old Rifle site along the Colorado River. They measured carbon dioxide production rates of the floodplain sediments, and using the corresponding data, they determined the relative importance of deeper vadose zone respiration. Their calculations yielded fluxes generally consistent with measurements taken at the soil surface. They calculated that the carbon dioxide production from between 2- to 3.5-m (7- to 11-ft) deep contributed 17% of the total floodplain respiration. The carbon dioxide rates were larger than some parts of the shallower vadose zone and underlying aquifer. The team’s results correlate with microbial respiration rates from laboratory incubation tests using the sediments from the site. How do the microbes survive in the deeper subsurface? The deeper unsaturated zone maintains beneficial levels of water and air and is annually resupplied with organic carbon from snowmelt-driven recharge and by water table decline. Further, the deeper soil environment is buffered from destructive extremes of temperature and salinity. These favorable conditions support deeper microbial respiration throughout the year.

This work was supported by the U.S. Department of Energy, Office of Science, Office of Biological and Environmental Research, Subsurface Biogeochemical Research program.