MicroRNA-based Therapy May be New Weapon to Combat Cancer 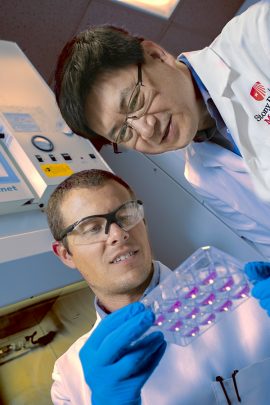 The News in Brief:

Newswise — STONY BROOK, NY, September 18, 2019 – A technology that manipulates microRNAs (miRNAs) developed by Jingfang Ju, PhD, a biochemist  and Professor in the Department of Pathology at the Renaissance School of Medicine at Stony Brook University, and colleagues has shown promise when used as anti-cancer therapeutic. The method may prove to be particularly effective against chemotherapy resistant cancers such as colorectal cancer. To advance the science of this method and develop miRNA-based drugs, the technology has been licensed to Curamir Therapeutics Inc., a biotechnology company, through an agreement with the Research Foundation of the State University of New York.

Dr. Ju and colleagues have studied the relationship between miRNAs and cancer at Stony Brook for more than 10 years. The role of miRNAs is to regulate protein synthesis and allows cells to rapidly adopt to their environment, such as the introduction of cancer chemotherapy agents. As a whole, miRNAs promote, or hinder, cellular processes that fight cancer. Certain miRNAs function as tumor suppressors. Dr. Ju and his team have identified multiple miRNAs that function as tumor suppressors in cancer. When cancer occurs, these miRNAs cease to function properly due to abnormal expression, thus promoting cancer and chemotherapy resistance.

“Our laboratory has modified these tumor suppressive miRNAs to make them more stable and effective as potential novel therapeutic molecules,” says Dr. Ju, who has been studying chemotherapy resistance and miRNAs for 25 years. “From that we have created a miRNA drug development platform technology that is designed to treat chemotherapy-resistant colorectal cancer, and potentially for other forms of cancer such as pancreatic, gastric, lung and breast.”

Most chemotherapy compounds are effective in eliminating the rapidly proliferating cancer cells. A key aspect to the miRNA drug platform is that it is also designed to eliminate cancer stem cells that are resistant to therapy. This strategy theoretically will be more effective to eliminate all tumor cells to prevent resistance.

One example of the drug platform is Dr. Ju’s work with a specific modified tumor suppressor miRNA, miR-129 mimic.

In colorectal cancer, resistance to 5-Fluorouracil (5-FU), a standard drug to treat the disease, occurs frequently and often results in metastatic and deadly outcomes.  When Dr. Ju and colleagues modified this miRNA and developed a mimic miR-129, treatment of advanced disease radically improved and chemotherapy resistance of the colorectal cancer stem cells reduced or was eliminated.

“In a narrow sense, we are developing new drugs to combat 5-FU resistance in colorectal cancer.  While this is important, in the wider sense the miRNA-based drug platform is shown to eliminate cancer stem cells – which are intrinsically resistant to all chemotherapeutic agents – so the application to chemotherapy resistance is potentially broad,” says Dr. Ju.

One other aspect to the potential advantages of this therapeutic approach, adds Dr. Ju, is that no toxicity was shown by delivering the miRNA-based drugs in laboratory models. Most nucleic acid based drugs rely on various delivery vehicles which often time associated with toxicity. He explains that these particular miRNA mimic compounds do not require delivery vehicles to enter cancer cells and therefore reduce toxicity.

Curamir will take the proprietary miRNA engineering platform to develop anticancer drugs based on the tumor suppressive miRNA mimics identified by Dr. Ju and colleagues. An incubated company financed by Delos Capital, Curamir will begin developing these drugs for testing with an initial $10 million in financing from Delos Capital.

The company is co-founded by veteran scientists in the field of gene regulation, including Dr. Ju; Dr. James Watson, co-discoverer of the DNA structure and a 1962 Nobel Laureate; and Dr. Lan Bo Chen, Professor Emeritus of Pathology at Harvard Medical School and Academician of the Academia Sinica of Taiwan.

Research leading to the development of the miRNA drug platform was funded in part by grants from the Long Island Bioscience Hub, led by the Center for Biotechnology at Stony Brook University, under the National Institutes of Health REACH  program, as well as the National Cancer Institute.

About Renaissance School of Medicine at Stony Brook University:

Established in 1971, Renaissance School of Medicine at Stony Brook University includes 25 academic departments. The three missions of the School are to advance the understanding of the origins of human health and disease; train the next generation of committed, curious and highly capable physicians; and deliver world-class compassionate healthcare. As a member of the Association of American Medical Colleges (AAMC) and a Liaison Committee on Medical Education (LCME) accredited medical school, Stony Brook is one of the foremost institutes of higher medical education in the country. Each year the School trains nearly 500 medical students and more than 600 medical residents and fellows. Faculty research includes National Institutes of Health-sponsored programs in neurological diseases, cancer, cardiovascular disorders, biomedical imaging, regenerative medicine, infectious diseases, and many other topics. Physicians on the School of Medicine faculty deliver world-class medical care through more than 31,000 inpatient, 108,000 emergency room, and 940,000 outpatient visits annually at Stony Brook University Hospital and affiliated clinical programs, making its clinical services one of the largest and highest quality medical schools on Long Island, New York. To learn more, visit www.medicine.stonybrookmedicine.edu.