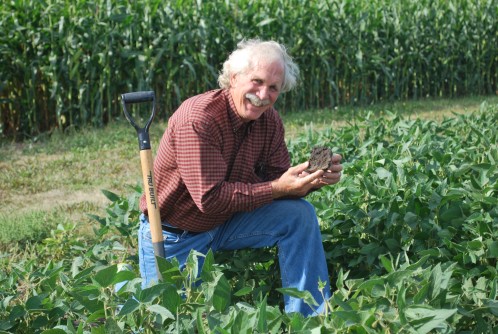 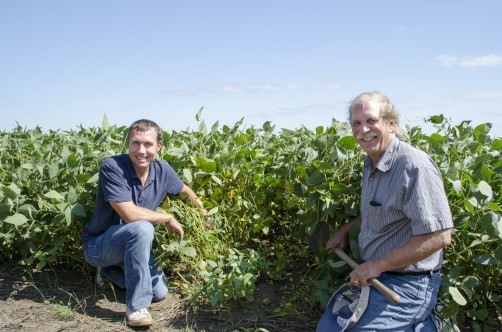 Doctoral student Graig Reicks and professor David Clay have planted cowpeas, crimson clover and forage radish between rows of soybeans to see if such crops can be used as forage once the beans have been harvested.

Research shows that soil carbon levels have increased by 24 percent from 1985 to 2010, according to Clay. Over the same period, corn yields increased by 73 percent.

Clay pointed out that these statistics are the result of a decrease in tillage intensity resulting from the development of specialized farm equipment and development of improved soybean and corn cultivars. “Higher organic matter content means the soil can store more water, which improves the crop’s ability to resist drought and to fully take advantage of genetic enhancements,” Clay said.

In addition, greater water retention means less runoff and, therefore, less environmental impact, he pointed out. From 1982 to 2007, conservation tillage practices reduced erosion by 34 percent in South Dakota, 23 percent in Nebraska and 20 percent in North Dakota.

Evaluating impact of water stressWater stress causes leaf pores, or stomata, to close so that the plant doesn’t lose moisture, according to Clay. To assess that impact, he collaborated with colleague professor Gregg Carlson, wife Sharon, a professor in weed science, U. S, Department of Agriculture plant physiologist David Horvath and agronomy doctoral students Stephanie Hansen and Graig Reicks. They analyzed how water stress affects gene expression in corn at the V-12 stage.

“Isotopic techniques when combined with molecular techniques give us the ability to look at plant physiology in addition to yield,” Clay said.

For instance, water stress results in a change in the relative amounts of carbon-12 and carbon-13 fixed during photosynthesis, he explained. By measuring stable carbon isotopic ratio, crop yield and relative gene expression, the researchers concluded that water stress decreased the plants’ ability to take up nutrients and recover from pest injury. “Plants have only so much carbon and energy,” Clay pointed out. “If they are allocating most of their resources to finish the reproductive cycle, that doesn’t leave much energy for other functions.”

“By understanding the stress that the plant is undergoing, we can develop management practices to close the gap between the plants’ achieved yield and its genetic yield potential,” he said, thus supporting worldwide food security.

Looking at increased yieldsTo gauge the impact plant breeding and soil research have had on crops grown under dry conditions, Clay compared corn, wheat and soybean yields during droughts in 1974 and 2012. Rainfall amounts were the same, but the Palmer Drought Severity Index rated 2012 as a more severe drought than 1974. Despite this, yields increased significantly—soybeans by 50 percent, wheat by nearly 150 percent and corn by more than 200 percent, based on U.S. Department of Agriculture data. Clay estimated that the increased water available to the crops through improved soil management had a net impact of $1.1 billion on South Dakota agriculture in 2012. This illustrates the value that research brings to producers, Clay explained, “and how important it is for all of us to work together.”

About South Dakota State UniversityFounded in 1881, South Dakota State University is the state’s Morrill Act land-grant institution as well as its largest, most comprehensive school of higher education. SDSU confers degrees from eight colleges representing more than 175 majors, minors and specializations. The institution also offers 32 master’s degree programs, 15 Ph.D. and two professional programs. The work of the university is carried out on a residential campus in Brookings, at sites in Sioux Falls, Pierre and Rapid City, and through Cooperative Extension offices and Agricultural Experiment Station research sites across the state. 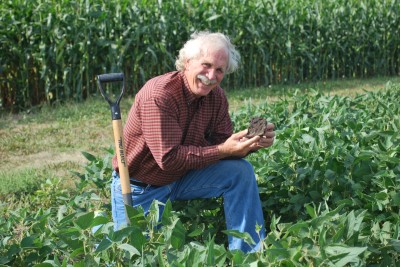 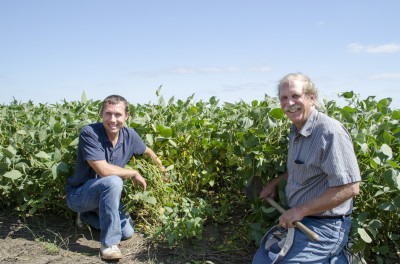 Caption: Doctoral student Graig Reicks and professor David Clay have planted cowpeas, crimson clover and forage radish between rows of soybeans to see if such crops can be used as forage once the beans have been harvested.