UNLV-led research advances rehabilitation for those living with artificial limbs. 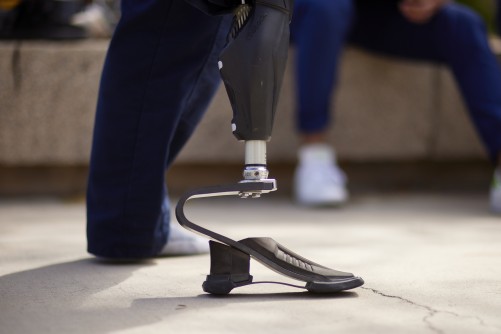 Newswise — There are more than two million people living with an amputation in the United States, with about 400 being added daily. For many of them, prostheses or artificial limbs are a part of their lives, and they need to relearn how their bodies move with their new limbs all over again.

The trick to learning how to use a new limb – and regaining confidence in movement – has less to do with the prosthesis itself and more to do with the mind, according to newly published research by UNLV physical therapy researcher Szu-Ping Lee. By adopting the right attentional focus during rehab, patients can learn new skills better and faster.

“Vascular diseases and diabetes are becoming more common and one of the long-term consequences is amputation,” said Lee. “It is important that clinicians like prosthetists and physical therapists apply the newest science so that their patients can learn faster and retain the skills that they learned better.”

The current standard of practice in rehabilitating the millions of amputees in the country prioritizes internally focused instructions where the patients are told to move their joints or contract their muscles in certain ways, which is a suboptimal mindset that Lee says we should think about changing. And the science is grounded in sports kinesiology research built by fellow UNLV professor Gabriele Wulf.

After approaching the ball and reading the green, you square your shoulders – lining up the putt. At this point, most of us are concentrating on our form and measuring every muscle movement like a pseudo-pro. This is the standard process for rehab, internal focus.

But there’s another path forward. Instead of prioritizing our body movement, focusing on the path of the ball or simply the hole is more intuitive and works better. This is what Wulf and Lee are talking about – the focus is on the outcome, not the movement itself.

Professor Wulf’s research over the last 20 years has shown that external-focus for motor tasks leads to faster learning and improved movement effectiveness and neuromuscular efficiency. Lee is hoping that this technique can help amputees more quickly master the use of artificial limbs.

“With the wrong kind of focus or instruction being used during physical therapy, the consequences can be catastrophic–the artificial leg becomes a paperweight in a closet,” said Lee. “We want to advance clinical practice and that’s the ultimate goal. We want physical therapy to get better and better for the patients.”

The lower-limb prosthesis rehabilitation of 21 adults was monitored for this research, along with the verbal instructions provided. Results showed that most of the verbal interactions were internally-focused (standard) on patients’ body movements and not externally on the movement effects. More research is being done to evaluate how motor learning outcomes such as balance and fall prevention may be improved with better instructions.

The study, “Direction of attentional focus in prosthetic training: Current practice and potential for improving motor learning in individuals with lower limb loss,” was published in July in the journal PLOS One. UNLV graduate students Alexander Bonczyk, Maria Katrina Dimapilis, Sarah Partridge, and Samantha Ruis contributed to the study, as well as University of Illinois at Chicago professor Andrew Sawers.