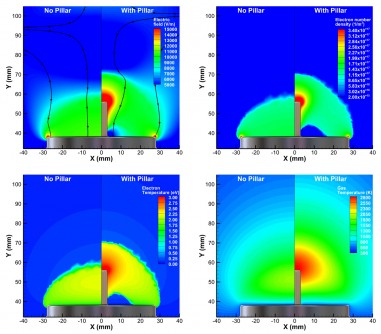 In research at Purdue, a simulation technique may help to reduce the cost of carbon nanostructures for research and commercial technologies, including advanced sensors and batteries. These graphs show how including a “dielectric pillar” might affect the manufacturing process.

Newswise — WEST LAFAYETTE, Ind. – A Purdue University research team has developed a simulation technique as part of a project to help reduce the cost of carbon nanostructures for research and potential commercial technologies, including advanced sensors and batteries.

Carbon nanostructures such as nanotubes, “nanopetals” and ultrathin sheets of graphite called graphene may ﬁnd a wide variety of applications in engineering and biosciences. Due to the rapid increase in their use over the past decade, researchers are working to develop a mass-production system to reduce their cost. The nanostructures are manufactured with a method called plasma-enhanced chemical vapor deposition (CVD).

In new findings, researchers have developed a model to simulate what happens inside the CVD reactor chamber to optimize conditions for fast and environmentally friendly conversion of raw materials, such as methane and hydrogen, into carbon nanopetals and other structures.

“There is a very complex mix of phenomena, plasma absorption of microwave power, heat transfer between plasma and gas and, ultimately, the chemistry of the reacting gas mixture that creates the nanostructures,” said Alina Alexeenko, an associate professor in the School of Aeronautics and Astronautics who is leading the modeling work. “The modeling could enable us to do less trial and error in searching for conditions that are just right to create nanostructures.”

Findings are detailed in a paper published online in the Journal of Applied Physics. It was the featured article of the journal’s March 21 print edition.

The nanopetals show promise as a sensor for detecting glucose in the saliva or tears and for "supercapacitors" that could make possible fast-charging, high-performance batteries. However, for the material to be commercialized researchers must find a way to mass-produce it at low cost.

The researchers used a technique called optical emission spectroscopy to measure the temperature of hydrogen in the plasma and compare it to the modeling result. Findings showed the model matches experimental data.

"Dr. Alexeenko and her students were able to capture the essence of physical processes that we, as experimentalists, initially believed would be too difficult to model,” said Timothy Fisher, the James G. Dwyer Professor in Mechanical Engineering. “But now that we can simulate the process, we will be able to look first on the computer for the set of conditions that improves the process in order to guide the next experiments in the lab."

The research is part of a Purdue project funded by the National Science Foundation. It focuses on creating a nanomanufacturing method that is capable of mass production at low cost. The underlying technology was developed by a research group led by Fisher. It consists of vertical nanostructures resembling tiny rose petals made of graphene that might be mass produced using roll-to-roll manufacturing, a mainstay of many industrial operations, including paper and sheet-metal production.

The new findings showed the production of the nanostructures is enhanced and sped up through the formation of “vertical dielectric pillars” in the CVD reactor.

“The implication is that we understand better what the effect is of these pillars and will reproduce this effect by other means in the large-scale roll-to-roll system that Dr. Fisher already has built,” Alexeenko said. “The simulations quantify the effect of the pillar and other parameters, such as power and pressure, on plasma enhancement.”

Much of the research is based at the Birck Nanotechnology Center in Purdue’s Discovery Park and is part of a cold plasma team under the Purdue College of Engineering preeminent team initiative.

“The next and ongoing step in this research is applying the modeling to roll-to-roll for large-scale manufacturing of nanopetals,” Alexeenko said. “Also, optimizing the reactor conditions for energy efficiency and environmental effects to minimize production of toxic chemicals.”

The aim of this work is to build a numerical model of hydrogen plasma inside a microwave plasma chemical vapor deposition system. This model will help in understanding and optimizing the conditions for the growth of carbon nanostructures. A 2-D axisymmetric model of the system is implemented using the ﬁnite element high frequency Maxwell solver and the heat transfer solver in COMSOL Multiphysics. The system is modeled to study variation in parameters with reactor geometry, microwave power, and gas pressure. The results are compared with experimental measurements from the Q-branch of the H2 Fulcher band of hydrogen using an optical emission spectroscopy technique. The parameter c in F€uner’s model is calibrated to match experimental observations at a power of 500W and 30Torr. Good agreement is found between the modeling and experimental results for a wide range of powers and pressures. The gas temperature exhibits a weak dependence on power and a strong dependence on gas pressure. The inclusion of a vertical dielectric pillar that concentrates the plasma increases the maximum electron temperature by 70%, the maximum gas temperature by 50%, and the maximum electron number density by 70% when compared to conditions without the pillar at 500W and 30Torr. Experimental observations also indicate intensiﬁed plasma with the inclusion of a pillar.