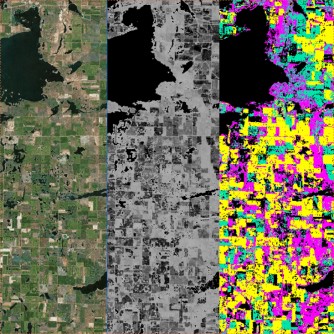 Doctoral candidate Lan Nguyen processes satellite data, left, using a land surface phenology model and derives a series of fitted parameters and metrics, middle, and then uses that derived information to perform land use/land cover classification, right. His new approach will more accurately differentiate vegetation based on the seasonality of land surface objects in the Dakotas, Minnesota, Iowa and Nebraska. 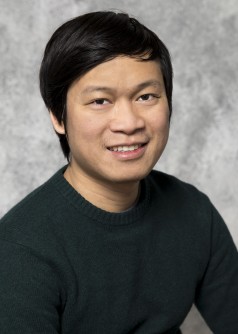 Newswise — From space, the light reflected from fields of corn and soybean appear very similar—what separates them is time, explained Lan Nguyen, a doctoral student at South Dakota State University. He is developing an algorithm to more accurately differentiate vegetation based on the seasonality of land surface objects in the Dakotas, Minnesota, Iowa and Nebraska.

Nguyen’s model utilizes images captured throughout the year from moderate resolution imaging spectroradiometers aboard NASA’s Terra and Aqua satellites, known as MODIS, and from finer spatial resolution imaging sensors on a pair of Landsat satellites. MODIS can view the Earth’s surface every day or two, while the pair of Landsats do so every eight days, if clouds don’t get in the way.

“Traditionally, a couple of satellite images, typically taken during the growing season, are used to identify land cover,” he explained.  “This approach looks at land cover from the temporal dimension, one that may see the changing fields more fully and perhaps fill in some gaps.” The model links the vegetation index through time as viewed with the Landsat sensors with the temperature of the land surface measured by the MODIS sensors.

“Even though this region does not have a lot of people, there are many changes in land use going on,” Nguyen said. Accurately tracking how land is being used and how that changes over time provides important data for those managing land and other natural resources.

Nguyen completed two master’s degrees at Marshall University in Huntington, West Virginia, and worked as part of a geospatial sciences team for two years before coming to SDSU in 2015. He did his undergraduate work in Vietnam.

Nguyen’s model uses a new approach to more accurately identify the type of vegetation, such as crops, based on their temporal development. For instance, he can differentiate corn from soybeans using multiple images because corn has a longer growing season than soybeans and has a lower vegetation index peak value.

The vegetation index is based on sunlight reflected from the surface, Nguyen explained. The index uses red and near infrared light reflectance. “Green vegetation absorbs much red light, but it reflects lots of near infrared light,” he said. “This difference is larger for vegetated areas, and smaller for areas of bare soil, building materials, dry vegetation, or open water,” he explained.

To evaluate his new maps of land cover and land cover change, Nguyen used the U.S. Geological Survey’s National Land Cover Dataset, which has fewer than 20 land cover classes, and the U.S. Department of Agriculture’s Cropland Data Layer, which has over 100 classes of specific crops and other land cover types. “Different datasets are created with different purposes in mind—it depends on the questions you’re looking to answer,” he said