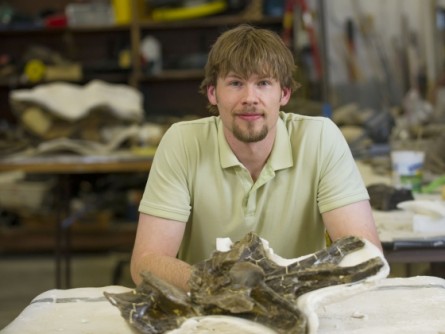 Newswise — BOZEMAN -- Ligaments in the long necks of certain sauropods probably helped them graze more efficiently, according to a Montana State University paleontologist who recently published his theory about sweep-feeding in an international journal.

MSU paleontologist Cary Woodruff said diplodocid sauropods had split spines that may have supported two elastic ligaments. When the dinosaurs extended their necks to feed on the left side, the ligament on the right side was stretched, storing energy. As the neck swung back to the right, that energy was released. The same recoil action happened when the sauropods swung their necks to the right.

Woodruff published his findings recently in “Historical Biology,” saying his research provides new support for the groundbreaking work of Oregon paleontologist Kent Stevens, who studies the structure of dinosaur skeletons.

Woodruff’s study also helped explain why diplodocid sauropods used a sweeping motion to eat, while sauropods with undivided spines moved their heads up and down, Woodruff said.

His work builds on efforts, too, to correct misconceptions about diplodocid sauropods. Textbook illustrations, for example, have shown the dinosaur eating foliage from the tops of trees. Toys have the dinosaur with a neck like a giraffe instead of one sticking straight out from its shoulders.

Woodruff said paleontologists used to study giraffes to better understand the necks of diplodocid sauropods, but there are no modern animals that closely compare. A better subject -- one that Woodruff uses in his sauropod studies -- is a breed of cattle known as the Ankole-Watusi. The animal originated in Africa, and its neck supports massive horns that can extend eight feet from tip to tip.

Diplodocid sauropods were among the most common dinosaur fossils found in the Morrison Formation in the western United States. Diplodocid sauropods are known for their long necks and tails, and some famous diplodocids are Apatosaurus and Diplodocus.

Stevens, a professor in the Department of Computer and Information Science at the University of Oregon, has spent more than two decades developing digital techniques to reconstruct and visualize the structure of dinosaur skeletons. After analyzing sauropod poses and the range of motion for various types of sauropod necks, he found that diplodocid sauropods had necks that stuck straight out from their shoulders and were more suited for sweeping sideways and downward than upward. They had teeth that indicated they were more likely to rake ferns from the ground than pull leaves from trees.

Woodruff specializes in the biomechanics and the growth of sauropods, although he has published numerous papers covering everything from the first burrowing dinosaurs to fossil manatees in ancient Egyptian catacombs.

A native of Bumpass, Virginia, Woodruff is an MSU graduate who earned his bachelor’s and master's degrees in earth sciences from the MSU College of Letters and Science with an emphasis on paleontology. Studying under renowned MSU paleontologist Jack Horner, he has led field crews at the O'Hair sauropod quarry near Livingston. He currently teaches paleontology at MSU and was recently named director of paleontology at the Great Plains Dinosaur Museum in Malta.