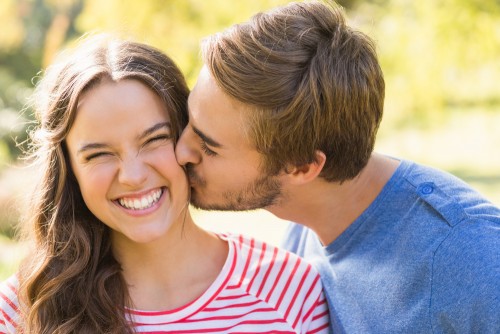 Newswise — Shakespeare said our lips were made for kissing and if you ask Texas A&M University Professor of Anthropology Vaughn Bryant about it, he’ll tell you all you need to know and more about this age-old pastime.

Kissing is good for your health Vaughn says kissing releases hormones and endorphins that relieve stress, help us recover from depression, lower our blood pressure, and can make us feel younger. “It can evoke euphoria that might last for days.”

The origins of kissing are hotly debated Some say kissing started millions of years ago as a result of mouth-to-mouth feeding between animals and their young, or as a sign of submission and dominance between apes. But Bryant says the most likely origin has to do with smell. He says early humans may have recognized one another by smell, developing a practice known as the “sniff kiss,” seen in a number of cultures, whereby people smelled each other’s cheeks as a greeting. Bryant says the earliest and best references of kissing come from India where “kiss” and “sniff” were referred to by the same word. Numerous Indian texts, including the Kama Sutra, refer to several different types of kissing, so Bryant says kissing as we know it today likely originated in ancient India.

Superstitions and folklore You probably know about kissing “boo-boos” and the sleeping princess awakened with a kiss, but Bryant has a few you might not know: If your nose itches, you will soon be kissed by a fool; If a standing man bends to kiss a woman, they will soon quarrel; Kiss your elbow and your sex will change (we’d like to see you try); And if you have a bad toothache, it will go away if you kiss a donkey on the nose.

The French have gotten undue credit Bryant says the origin of the “French kiss” wasn’t France, but India. “The reason the French got the credit was due to the great number of travelers who went to France in the late 19th and early 20th centuries,” he explains. “The French women were warm-natured and thought nothing of kissing rich American men visiting Paris. This was a change from the Puritan-bred New England women; thus upon their return the men would say ‘While in France, get the girls to kiss you.’ This later became ‘Get a French kiss.’”

Kissing on Valentine’s Day The official holiday for love and kissing, and the scourge of single people everywhere, the origins of Valentine’s Day are also contested, says Bryant. “According to some historical sources, the day is named after an early Third Century Christian priest named Valentino who was imprisoned by the Roman Emperor Claudius II because he married young couples against the law,” Bryant notes. “Claudius forbid young men to marry so they could serve in the army without leaving a wife and children behind. When Valentino was told he could go free if he would renounce his faith in God and acknowledge Claudius II as a living God, he refused and was executed on Feb. 14, around A.D. 269. In A.D. 496, Pope Gelasius declared Feb. 14 “Valentine Day” in honor of the Christian martyr.

“During the Middle Ages Valentine’s Day became a popular holiday. It was believed that this was the time of the year when birds began to build their nests and mate. This inspired the idea of love being associated with the holiday.”

Bryant concludes that if your Valentine’s Day will be sans kissing this year, chocolate kisses are a passable substitute. “Not as good as the real thing but they contain the same chemicals that will flood your brain with pleasure just like a real kiss!”