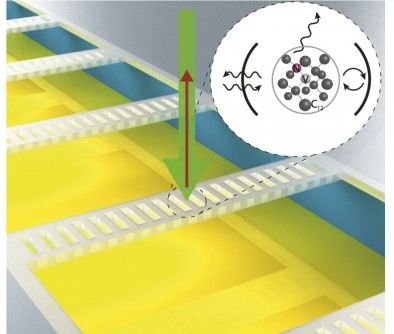 Building quantum memories on a chip: Diamond photonic crystal cavities (ladder-like structures) are integrated on a silicon substrate. Green laser light (green arrow) excites electrons on impurity atoms trapped within the cavities, picking up information about their spin states, which can then be read out as red light (red arrow) emitted by photoluminescence from the cavity. The inset shows the nitrogen-vacancy (NV)-nanocavity system, where a nitrogen atom (N) is substituted into the diamond crystal lattice in place of a carbon atom (gray balls) adjacent to a vacancy (V). Layers of diamond and air keep light trapped within these cavities long enough to interact with the nitrogen atom's spin state and transfer that information via the emitted light. 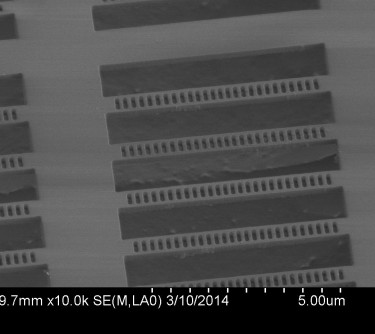 A scanning electron micrograph of one of the one-dimensional diamond crystal cavities. 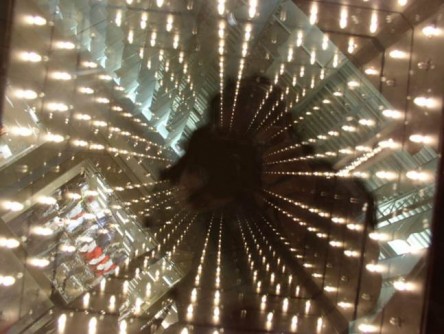 Similar to these funhouse mirrors, diamond crystal nanocavities reflect and trap light around an impurity atom in the diamond crystal lattice so that the light can more readily pick up and transmit information about the atom's spin state. This spin-photon interaction is essential for quantum computing applications. 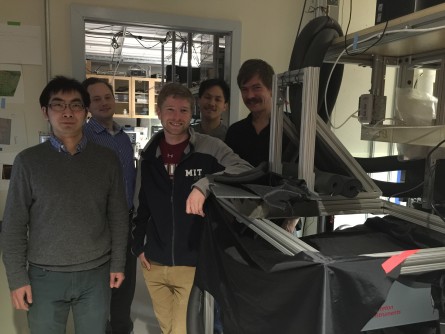 Nature Communications, January 28, 2015; Brookhaven National Laboratory is supported by the Office of Science of the U.S. Department of Energy.

Newswise — UPTON, NY - The idea of computing systems based on controlling atomic spins just got a boost from new research performed at the Massachusetts Institute of Technology (MIT) and the U.S. Department of Energy's (DOE) Brookhaven National Laboratory. By constructing tiny "mirrors" to trap light around impurity atoms in diamond crystals, the team dramatically increased the efficiency with which photons transmit information about those atoms' electronic spin states, which can be used to store quantum information. Such spin-photon interfaces are thought to be essential for connecting distant quantum memories, which could open the door to quantum computers and long-distance cryptographic systems.

Crucially, the team demonstrated a spin-coherence time (how long the memory encoded in the electron spin state lasts) of more than 200 microseconds-a long time in the context of the rate at which computational operations take place. A long coherence time is essential for quantum computing systems and long-range cryptographic networks.

"Our research demonstrates a technique to extend the storage time of quantum memories in solids that are efficiently coupled to photons, which is essential to scaling up such quantum memories for functional quantum computing systems and networks," said MIT's Dirk Englund, who led the research, now published in Nature Communications. Scientists at the Center for Functional Nanomaterials (CFN http://www.bnl.gov/cfn/), a DOE Office of Science User Facility at Brookhaven Lab, helped to fabricate and characterize the materials.

The memory elements described in this research are the spin states of electrons in nitrogen-vacancy (NV) centers in diamond. The NV consists of a nitrogen atom in the place of a carbon atom, adjacent to a crystal vacancy inside the carbon lattice of diamond. The up or down orientation of the electron spins on these NV centers can be used to encode information in a way that is somewhat analogous to how the charge of many electrons is used to encode the "0"s and "1"s in a classical computer.

The scientists preferentially orient the NV's spin, whose direction is naturally randomly oriented, along a particular direction. This step prepares a quantum state of "0". From there, scientists can manipulate the electron spins into "1" or back into "0" using microwaves. The "0" state has brighter fluorescence than the "1" state, allowing scientists to measure the state in an optical microscope.

The trick is getting the electron spins in the NV centers to hold onto the stable spin states long enough to perform these logic-gate operations-and being able to transfer information among the individual memory elements to create actual computing networks.

These cavities, nanofabricated at Brookhaven by MIT graduate student Luozhou Li with the help of staff scientist Ming Lu of the CFN, consist of layers of diamond and air tightly spaced around the impurity atom of an NV center. At each interface between the layers there's a little bit of reflection-like the reflections from a glass surface. With each layer, the reflections add up-like the reflections in a funhouse filled with mirrors. Photons that enter these nanoscale funhouses bounce back and forth up to 10,000 times, greatly enhancing their chance of interacting with the electrons in the NV center. This increases the efficiency of information transfer between photons and the NV center's electron spin state.

The devices' performance was characterized in part using optical microscopy in a magnetic field at the CFN, performed by CFN staff scientist Mircea Cotlet, Luozhou Li, and Edward Chen, who is also a graduate student studying under the guidance of Englund at MIT.

"Coupling the NV centers with these optical resonator cavities seemed to preserve the NV spin coherence time-the duration of the memory," Cotlet said.

Added Englund: "These methods have given us a great starting point for translating information between the spin states of the electrons among multiple NV centers. These results are an important part of validating the scientific promise of NV-cavity systems for quantum networking."

In addition, said Li, "The transferred hard mask lithography technique that we have developed in this work would benefit most unconventional substrates that aren't suitable for typical high-resolution patterning by electron beam lithography. In our case, we overcame the problem that hundred-nanometer-thick diamond membranes are too small and too uneven. "

The methods may also enable the long-distance transfer of quantum-encoded information over fiber optic cables. Such information could be made completely secure, Englund said, because any attempt to intercept or measure the transferred information would alter the photons' properties, thus alerting the sender and the recipient to the possible presence of an eavesdropper.

Fabrication and experiments were supported in part by the Air Force Office of Scientific Research. The CFN at Brookhaven Lab is supported by the DOE Office of Science. Additional funding for individual researchers came from the Alexander von Humboldt Foundation, the NASA Office of the Chief Technologist's Space Technology Research Fellowship, and the National Science Foundation.

SIDEBAR: Working Together: Benefits for Facility Users, Students, and CFN

"At the CFN," said longtime facility user Dirk Englund of MIT, "we can do things that are very difficult or impossible in a normal university setting. Developing a radically new process, like our processing of diamond quantum memories, has been so successful at the CFN because of the consistency in the fabrication tools, the wide range of characterization tools, and the expert knowledge."

His students agree: "We got a lot of technical support and scientific guidance from CFN research scientists, who are willing to help early-year students start their research careers," said MIT graduate student Luozhou Li. In addition, he said, "CFN has all the advanced nanofabrication and confocal facilities centralized in one place. It is convenient and efficient to step from one room to another, finish the device fabrication in a clean-room environment and measure optical properties quickly."

Edward Chen, the other MIT grad student involved in this work, appreciated the chance to see first-hand the benefits of working in an interdisciplinary atmosphere at Brookhaven Lab, where state-of-the-art facilities like the CFN and the new National Synchrotron Light Source II (NSLS-II) can be found side-by-side. "I hope to continue finding ways to improve the nanofabrication process we developed for this research so that I can potentially take advantage of other unique facilities available at Brookhaven Lab," he said.

The benefits go both ways, said CFN staff scientist, Mircea Cotlet. "We now have a new method we can use and pass on to future users," he said, referring to the electron spin resonance microscopy techniques used to measure the spin-dependent fluorescence of the NV centers and resonators explored in this study.

On a more personal note, Cotlet added, "I have never worked with such challenging students." The collaboration, he said, helped invigorate his work. "I learned a lot from them. They make you realize you don't have all the answers."

Continuing to stimulate that kind of intellectual interaction for the benefit of science and society is what research at DOE user facilities like the CFN is all about.

***Brookhaven National Laboratory is supported by the Office of Science of the U.S. Department of Energy. The Office of Science is the single largest supporter of basic research in the physical sciences in the United States, and is working to address some of the most pressing challenges of our time. For more information, please visit science.energy.gov.