Analysis of exploding star's light curve and color spectrum reveal spectacular demise of one of the closest supernova to Earth in recent years; its parent star was so big it's radius was 200 times larger than our sun

Watch the explosion of a star in the M74 galaxy as it goes supernova, visible by changes in its brightness over time as observed by a robotic telescope. SN 2013ej, as it's been named, was a massive star in the nearby galaxy M74. It exploded 30 million years ago. While the explosion was near to Earth by cosmic standards, its light wasn't visible in our night sky until July 23, 2013. This video was compiled from images taken by Southern Methodist University's robotic ROTSE-IIIb telescope at McDonald Observatory, Fort Davis, Texas. The video progresses from the supernova's appearance to its peak brightness, plateau and ultimate demise. Viewers can see the core of the M74 galaxy, which is visible in the right foreground. Two bright stars in the Milky Way galaxy are visible in the left foreground. SN 2013ej rises and falls in the background. The star was one of billions in M74, which like our Milky Way is a spiral galaxy undergoing star formation. The progenitor star of SN 2013ej had a mass just before its explosion of about 15 times that of the sun, according to SMU graduate student Govinda Dhungana. Its explosion energy equaled the luminosity of 100 million suns. Like many others, SN 2013ej was a Type II supernova. That is a massive star still undergoing nuclear fusion. Once its fuel runs out, its core collapses. Within a quarter-second the star explodes. 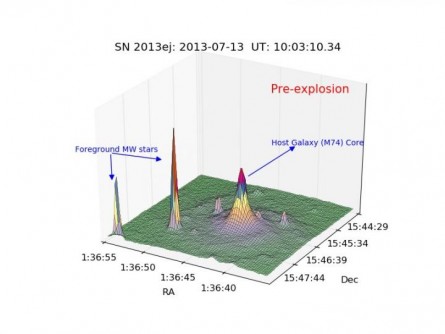 A giant star that exploded 30 million years ago was one of the closest to Earth in recent years to go supernova, say astrophysicists at Southern Methodist University, Dallas. It was visible as a point of light in the night sky. This image of Supernova 2013ej shows the star just prior to explosion. 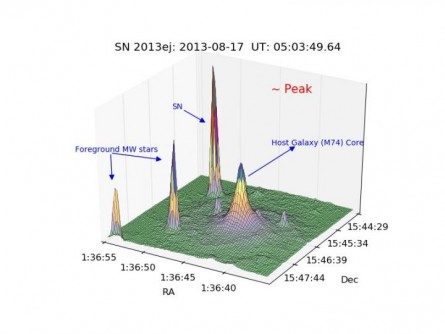 A giant star that exploded 30 million years ago was one of the closest to Earth in recent years to go supernova, say astrophysicists at Southern Methodist University, Dallas. It was visible as a point of light in the night sky. This image of Supernova 2013ej shows the star at peak explosion.

Newswise — A giant star that exploded 30 million years ago in a galaxy near Earth had a radius prior to going supernova that was 200 times larger than our sun, according to astrophysicists at Southern Methodist University, Dallas.

The sudden blast hurled material outward from the star at a speed of 10,000 kilometers a second. That's equivalent to 36 million kilometers an hour or 22.4 million miles an hour, said SMU physicist Govinda Dhungana, lead author on the new analysis.

The comprehensive analysis of the exploding star's light curve and color spectrum have revealed new information about the existence and sudden death of supernovae in general, many aspects of which have long baffled scientists.

"There are so many characteristics we can derive from the early data," Dhungana said. "This was a big massive star, burning tremendous fuel. When it finally reached a point its core couldn't support the gravitational pull inward, suddenly it collapsed and then exploded."

The massive explosion was one of the closest to Earth in recent years, visible as a point of light in the night sky starting July 24, 2013, said Robert Kehoe, SMU physics professor, who leads SMU's astrophysics team.

The explosion, termed by astronomers Supernova 2013ej, in a galaxy near our Milky Way was equal in energy output to the simultaneous detonation of 100 million of the Earth's suns.

The star was one of billions in the spiral galaxy M74 in the constellation Pisces.

Considered close by supernova standards, SN 2013ej was in fact so far away that light from the explosion took 30 million years to reach Earth. At that distance, even such a large explosion was only visible by telescopes.

Dhungana and colleagues were able to explore SN 2013ej via a rare collection of extensive data from seven ground-based telescopes and NASA's Swift satellite. The data span a time period prior to appearance of the supernova in July 2013 until more than 450 days after.

The team measured the supernova's evolving temperature, its mass, its radius, the abundance of a variety of chemical elements in its explosion and debris and its distance from Earth. They also estimated the time of the shock breakout, the bright flash from the shockwave of the explosion.

The star's original mass was about 15 times that of our sun, Dhungana said. Its temperature was a hot 12,000 Kelvin (approximately 22,000 degrees Fahrenheit) on the tenth day after the explosion, steadily cooling until it reached 4,500 Kelvin after 50 days. The sun's surface is 5,800 Kelvin, while the Earth's core is estimated to be about 6,000 Kelvin.

Shedding new light on supernovae, mysterious objects of our universe

Supernovae occur throughout the universe, but they are not fully understood. Scientists don't directly observe the explosions but instead detect changes in emerging light as material is hurled from the exploding star in the seconds and days after the blast.

Telescopes such as SMU's robotic ROTSE-IIIb telescope at McDonald Observatory in Texas, watch our sky and pick up the light as a point of brightening light. Others, such as the Hobby Eberly telescope, also at McDonald, observe a spectrum.

SN 2013ej is M74's third supernova in just 10 years. That is quite frequent compared to our Milky Way, which has had a scant one supernova observed over the past 400 years. NASA estimates that the M74 galaxy consists of 100 billion stars.

M74 is one of only a few dozen galaxies first cataloged by the astronomer Charles Messier in the late 1700s. It has a spiral structure -- also the Milky Way's apparent shape -- indicating it is still undergoing star formation, as opposed to being an elliptical galaxy in which new stars no longer form.

It's possible that planets were orbiting SN 2013ej's progenitor star prior to it going supernova, in which case those objects would have been obliterated by the blast, Kehoe said.

"If you were nearby, you wouldn't know there was a problem beforehand, because at the surface you can't see the core heating up and collapsing," Kehoe said. "Then suddenly it explodes -- and you're toast."

Scientists remain unsure whether supernovae leave behind a black hole or a neutron star like a giant atomic nucleus the size of a city.

"The core collapse and how it produces the explosion is particularly tricky," Kehoe said. "Part of what makes SN 2013ej so interesting is that astronomers are able to compare a variety of models to better understand what is happening. Using some of this information, we are also able to calculate the distance to this object. This allows us a new type of object with which to study the larger universe, and maybe someday dark energy."

Being 30 million light years away, SN 2013ej was a relatively nearby extragalactic event, according to Jozsef Vinko, astrophysicist at Konkoly Observatory and University of Szeged in Hungary.

"Distances to nearby galaxies play a significant role in establishing the so-called cosmic distance ladder, where each rung is a galaxy at a known distance."

"Nearby supernovae are especially important," Vinko said. "Paradoxically, we know the distances to the nearest galaxies less certainly than to the more distant ones. In this particular case we were able to combine the extensive datasets of SN 2013ej with those of another supernova, SN 2002ap, both of which occurred in M74, to suppress the uncertainty of their common distance derived from those data."

Supernova spectrum analysis is like taking a core sample

While stars appear to be static objects that exist indefinitely, in reality they are primarily a burning ball, fueled by the fusion of elements, including hydrogen and helium into heavier elements. As they exhaust lighter elements, they must contract in the core and heat up to burn heavier elements. Over time, they fuse the various chemical elements of the periodic table, proceeding from lightest to heaviest. Initially they fuse helium into carbon, nitrogen and oxygen. Those elements then fuel the fusion of progressively heavier elements such as sulfur, argon, chlorine and potassium.

"Studying the spectrum of a supernova over time is like taking a core sample," Kehoe said. "The calcium in our bones, for example, was cooked in a star. A star's nuclear fusion is always forging heavier and heavier elements. At the beginning of the universe there was only hydrogen and helium. The other elements were made in stars and in supernovae. The last product to get created is iron, which is an element that is so heavy it can't be burned as fuel."

"When we have as many spectra as we have for this supernova at different times," Kehoe added, "we are able to look deeper and deeper into the original star, sort of like an X-ray or a CAT scan."

Analysis of SN 2013ej's spectrum from ultraviolet through infrared indicates light from the explosion reached Earth July 23, 2013. It was discovered July 25, 2013 by the Katzman Automatic Imaging Telescope at California's Lick Observatory. A look back at images captured by SMU's ROTSE-IIIb showed that SMU's robotic telescope detected the supernova several hours earlier, Dhungana said.

"These observations were able to show a rapidly brightening supernova that started just 20 hours beforehand," he said. "The start of the supernova, termed 'shock breakout,' corresponds to the moment when the internal explosion crashes through the star's outer layers."

Like many others, SN 2013ej was a Type II supernova. That is a massive star still undergoing nuclear fusion. Once iron is fused, the fuel runs out, causing the core to collapse. Within a quarter second the star explodes.

Supernovae have death and birth written all over them

Massive stars typically have a shorter life span than smaller ones.

"SN 2013ej probably lived tens of millions of years," Kehoe said. "In universe time, that's the blink of an eye. It's not very long-lived at all compared to our sun, which will live billions of years. Even though these stars are bigger and have a lot more fuel, they burn it really fast, so they just get hotter and hotter until they just gobble up the matter and burn it."

For most of its brief life, SN 2013ej would probably have burned hydrogen, which then fused to helium, burning for a few hundred thousand years, then perhaps carbon and oxygen for a few hundred days, calcium for a few months and silicon for several days.

"Supernovae have death and birth written all over them," Kehoe said. "Not only do they create the elements we are made of, but the shockwave that goes out from the explosion -- that's where our solar system comes from."

Outflowing material slams into clouds of material in interstellar space, causing it to collapse and form a solar system.

"The heavy elements made in the supernova and its parent star are those which comprise the bulk of terrestrial planets, like Earth, and are necessary for life," Kehoe said. 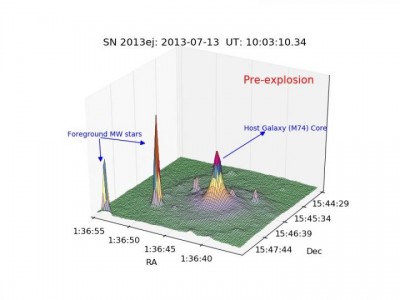 Caption: A giant star that exploded 30 million years ago was one of the closest to Earth in recent years to go supernova, say astrophysicists at Southern Methodist University, Dallas. It was visible as a point of light in the night sky. This image of Supernova 2013ej shows the star just prior to explosion. 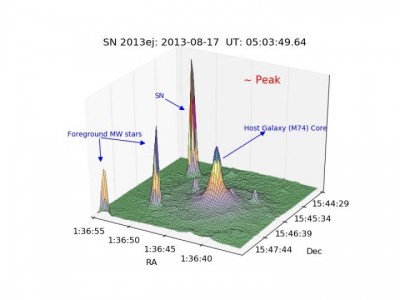 Caption: A giant star that exploded 30 million years ago was one of the closest to Earth in recent years to go supernova, say astrophysicists at Southern Methodist University, Dallas. It was visible as a point of light in the night sky. This image of Supernova 2013ej shows the star at peak explosion.