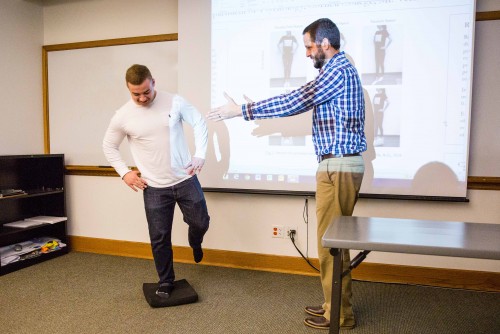 Lucas Casten ’18 and Cornell College Professor of Psychology Steve Neese recently concluded a study looking at eight soccer players. The athletes voluntarily kept track of how many times they hit the soccer ball with their head over a short, two-week soccer season in Costa Rica.

“The testing took 15–20 minutes in the days before they left on their trip,” Casten said. “We’d ask the athletes to do balance positions on the floor and then to do the same balance position on a foam pad. While they did that, we tested them through nine working-memory tasks such as subtracting numbers, remembering a set of 10 words, and saying the months backward.”

The soccer players, then, repeated the tests when they returned from their trip.

The results showed a strong relationship between the amount of times they headed the ball and a decrease in performance on the memory tasks while engaging in the balance challenges.

“The findings were statistically significant,” Casten said. “As headings increased, for example, there was a negative association with words remembered, meaning the more headings–the fewer words they remembered.”

The soccer players also did worse on a computer test that measured reaction time.

“We aren’t trying to prove soccer is bad, in any way,” Neese said. “What this research shows is in taxing situations, when your attention is split, there might be some subtle changes, at least initially, that can be traced back to how many times you head the ball.”

The researchers say the drop in test scores could dissipate over time and could also be caused by a number of other factors such as travel or sleep deprivation. With very little research in the area of brain imbalance from smaller impacts, such as heading a soccer ball, they know their work is important.

“We don’t know if the effects are permanent,” Neese said. “But the bigger question is–are there more subtle effects happening that we might be missing out on?”

Casten also says this research suggests that tests done on professional athletes might need to change. Currently, when a player is tested for a head injury, they take part in those working-memory tasks without any added tasks.

“Our results show you will likely need another taxation route, like balance, to tease out the effects of a brain injury and that our current methodology of diagnosing concussions might not be as effective as previously thought,” Casten said.

Casten started researching brain imbalances with Neese in January of 2017. It has now become his passion. In fact, he took it upon himself to find and participate in an internship at the University of British Columbia in Canada, where he is from, during the summer of 2017. During that opportunity, he completed neurocognitive testing to look at methods of assessing recovery from concussions.

“I was really happy Cornell brought this here,” Casten said. “I have learned a lot from Steve, and I’m still learning a ton every day. This program really addresses what I want to do, especially with working in an interdisciplinary field.”

Behavioral neuroscience is interdisciplinary because the program blends psychology, chemistry, and biology.

Casten is currently continuing his research at Cornell by studying people with a history of concussions. At the same time, he’s thinking about life after graduation and applying for research assistant positions at Yale and the University of Iowa. He plans to get a neuroscience Ph.D. and ultimately conduct his own research.

Cornell College, a selective liberal arts college in Mount Vernon, Iowa, offers a distinctive One Course At A Time curriculum, immersing students in a single academic subject during each 18-day block. With a student body from 42 states and 17 foreign countries, and renowned faculty, speakers, and entertainers, Cornell offers the world from its hilltop campus.