New Book Offers Insight Into Not-So-Funny Side of Comedy 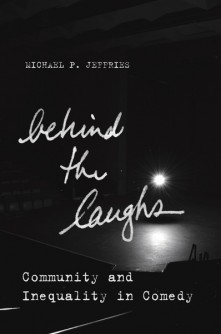 Behind the Laughs Community and Inequality in Comedy by MICHAEL P. JEFFRIES

Newswise — Wellesley, Mass.—Comedy might be funny, but it’s no laughing matter—at least not when it comes to what’s hidden behind the scenes. The humor business can often be dark and difficult, says author Michael Jeffries in his new book, Behind the Laughs: Community and Inequality in Comedy. Jeffries, an associate professor of American studies at Wellesley College, brings readers into the world of comedy to reveal the murky corners of this tough profession.

“Behind the Laughs explores the world of professional comedy, where the overlap of social and professional demands produces strong artistic communities within an exploitative industry” Jeffries says. “The benefits of these communities are unevenly distributed, however, as comedy workers from different backgrounds have wildly different experiences and prospects in the business.”

In the book, Jeffries refers to conversations with comedians, as well as club owners, bookers, and managers, to exemplify the social connections that professional humor demands. Not only do comedians have to read their audience night after night, Jeffries says, but they must also create lasting bonds across the profession to get gigs in the first place.

“People may not realize, when they are doubled over with laughter over a good comedian’s jokes, that the rewards of comedy are not often fame and fortune,” says Jeffries. “Only performers who know the inside rules of their community are able to make it a successful career.”

He recalls his conversation with one comedian. “This person told me, ‘There are so many funny people, that being funny doesn’t mean anything,’” he says. “Performers need to join some sort of comedy community, whether it’s a stand-up scene in a city, or a group of performers who train together at an improvisational theater, to survive personally and professionally.” Jeffries says that belonging to a community is often what keeps these performers going through all the frustration and mistreatment they endure, especially early in their careers.

Jeffries’ research has shown that in comedy, women and people of color are often discriminated against in ways that are racist, sexist, and otherwise exploitative. He focuses on how these groups create meaning and build identities in what can be a thankless profession.

He had numerous conversations with female comedians; he says nearly all of them talked about gender expectations in the comedy business. From an early age, he says, boys seem to be rewarded for being class clowns, while girls are discouraged from acting out or being too loud. “The women in the book reject those social expectations, but their determination to be comedians does not protect them from the sexism they face in comedy,” he says. “They discussed being objectified by audiences and treated like tokens by their peers. They told me that to gain entrance into comedy communities and be taken seriously as professionals, they had to socialize in a way that felt like ‘joining the boys’ team.’”

Adding to those challenges for female comedians, Jeffries says, most of the gatekeepers at every level of the business, from Hollywood to small comedy clubs, are white males. Whether intentional or not, he said, the social rules of small comedy scenes and the greater entertainment business place different demands on people who do not fit that description.

“The good news is, technological advances and the rise of Netflix, YouTube, and other digital media have increased diversity and made it easier for comedians of all backgrounds and cultures to gain exposure,” says Jeffries. “However, the fact remains that building a long career in comedy requires friendships and social bonds in the business, and race, class, and gender shape much of what happens both on stage and off.”

Jeffries also has penned a couple of editorials on women in comedy – in The Atlantic, “The Remarkable Rise of Tiffany Haddish; and in The Boston Globe, “Amy Schumer pay controversy highlights pervasive sexism in comedy.” Jeffries describes in both instances, the challenges these women faced in a business that’s still dripping with sexism and racism – especially against female comedians.

Jeffries teaches courses in race and cultural studies, racism and sexism, and the sociology of sports. He emphasizes the benefits of interdisciplinary learning, and he encourages his students to bring their academic work to bear on their daily lives.

Jeffries’ previous books are Paint the White House Black: Barack Obama and the Meaning of Race in America, which uses Obama-related topics to demonstrate how race relies on other social forces, like gender and class, for its meaning and impact, and Thug Life: Race, Gender, and the Meaning of Hip-Hop, which spotlights hip-hop fans and documents the ways listeners define the genre and use it in their lives.

Since 1875, Wellesley College has been a leader in providing an excellent liberal arts education for women who will make a difference in the world. Its 500-acre campus near Boston is home to 2,400 undergraduate students from all 50 states and 75 countries.

Behind the Laughs: Community and Inequality in Comedy