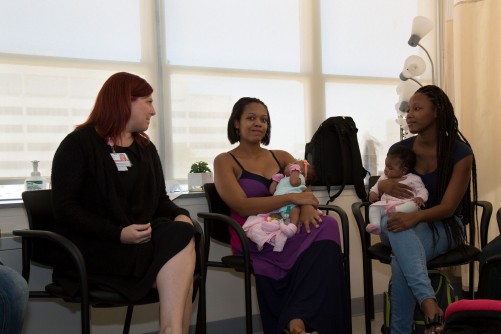 Newswise — Nicole Elliot and Jessica Graham were all smiles as they cuddled and introduced their respective newborn daughters on a sunny fall afternoon in an examination room on the third floor of Sinai Hospital of Baltimore’s Rosenbloom Building at Sinai Community Care, where the proud moms had started a friendship a few months earlier.

Elliot and Graham were among the first participants in Sinai Community Care’s CenteringPregnancy program, which takes a comprehensive, compassionate and patient-engaging approach to prenatal care. The women returned on that fall afternoon for a postpartum visit that also served as a mini-reunion. The moms and babies got checkups prior to the sharing of birth stories and discussions on important parenting topics.

After a brief meditation period, the group facilitator, Dr. Kelly McFarland, gave Elliot and Graham the floor to recount their birthing experiences. The women said they welcomed their bundles of joy earlier than expected: Graham’s daughter, Sasha, entered the world a week early, and Elliot’s daughter, Zoe, was three days early.

Elliot was the lone member of Sinai’s first CenteringPregnancy group who was becoming a first-time mom. “It was nice to see the other women help guide her through her pregnancy,” McFarland said.

Elliot and Graham said were surprised at how quickly the actual births occurred. The women cited strong support systems at home and credited CenteringPregnancy group care with providing good parenting tips and connecting them with resources, experts and others whom they could relate to during their pregnancy journey.

“At first, most of the girls were quiet, sizing each other up … But they became friends quickly,” McFarland said of Sinai’s first CenteringPregnancy group, which began with five members, ages 24 to 38, but was reduced to four after one of the members left due to pregnancy complications. “We encouraged the women to exchange info so they can be in touch if they need someone to talk to or relate to. I became very attached to these women. They are very special to me.”

In following a model that is being implemented at health care sites around the country, CenteringPregnancy group care at Sinai educates expectant mothers on maintaining a healthy pregnancy and newborn care in a comfortable, welcoming setting where they can take an active role in their care and meet other expectant moms who are due around the same time. The program consists of 10 prenatal visits, each about two hours long. A new physician-led group begins each month. Going forward, each group will include up to 10 women.

Participants get one-on-one time with their physician and learn how to assess and record some of their own health data, such as their weight and blood pressure readings. After their health assessments, they take part in a group forum that brings together women from different backgrounds and encourages the sharing of pregnancy experiences and discussions on topics such as breastfeeding, child care and controlling pain during labor. “We cover topics from what to expect during pregnancy, including what is normal and what are occurrences that are common but not normal,” McFarland said.

With the first group, there was a new theme every week, McFarland said. Guest speakers led discussions on postpartum depression, domestic violence and helpful programs available to women such as car seat and crib programs.

“The sessions are not about being lectured by the facilitators. It is about the women teaching each other,” McFarland said. “I love the bond I built with these women—something I do not believe is always achievable with standard, one-on-one visits.”

The CenteringPregnancy group care model has been credited with helping to lower preterm births, increase breastfeeding rates and attendance at postpartum visits, and improve pregnancy health among adolescents. The program at Sinai is open to English-speaking patients who do not require high-risk obstetric care for their entire pregnancy. To learn more about the CenteringPregnancy program and Sinai Community Care, call 410-601-9443 (ext. 3).