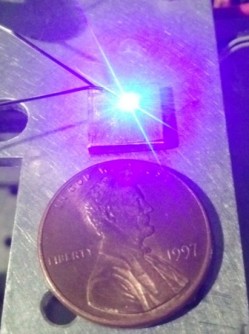 A VCSEL with a penny for scale

Newswise — Washington D.C., Oct. 13, 2015 -- A simple new electron-beam multilayer deposition technique for creating intracavity contacts -- an important component of gallium nitride-based (III-nitride) vertical-cavity surface-emitting lasers (VCSELs) -- not only yields intriguing optoelectronic properties but also paves the way for others entering this realm of research. The new technique was developed by a team of researchers at the University of California, Santa Barbara.

As the team reports in the Journal of Applied Physics, from AIP Publishing, they carried out a series of simulations to explore the dependence of important performance parameters such as mirror reflectance, threshold current density, and differential efficiency on the scattering loss caused by the roughness of tin-doped indium oxide (ITO) intracavity contacts for 405-nm flip chip III-nitride-based vertical-cavity surface-emitting lasers (VCSELs).

“During the 2012-2013 timeframe, we demonstrated one VCSEL device, but then struggled to get repeatable results,” explained John T. Leonard, a Ph.D. candidate working within Nobel laureate Shuji Nakamura’s research group in the Solid State Lighting & Energy Electronics Center, Materials Department in the College of Engineering at the University of California, Santa Barbara.

So the team decided to track down “the various potential sources of loss in our devices,” Leonard said. “We viewed developing a highly smooth e-beam-deposited ITO intracavity contact as a critical part of improving our VCSEL performance and yield.”

At the heart of the team’s work is combining simulations in fundamental physics -- including diffraction (scattering of light from interfaces), laser design (to approximate threshold currents at which a laser turns on), and materials science (designing and developing the multilayer ITO film).

“We set out by exploring how a rough ITO film changes the way light scatters in the highly reflective mirrors used in VCSELs,” said Leonard. “To do this we used a simulation technique called the ‘transmission matrix method.’ But we also included parameters to account for scattering of light at interfaces, which tends to be ignored in the transmission matrix method and VCSEL analysis.” After gaining a better understanding of how rough interfaces change mirror reflectance, the team moved on to explore how this change might affect III-nitride VCSELs. “Specifically, we analyzed how the lasing current and laser efficiency would be affected by rough interfaces and/or rough ITO intracavity contacts,” noted Leonard. “Then we searched for ways to achieve highly smooth ITO films.”

The team’s original hope was that it would be possible to simply change the temperature or oxygen pressure at which the ITO film was deposited to achieve the desired optoelectronic and surface roughness properties. “But this wasn’t the case,” said Leonard. “We ended up developing a multilayer technique to first deposit a very thin ITO film at low temperature, followed by another thicker ITO film at a high temperature -- and it gave us great optoelectronic and surface roughness properties.”

The key significance of the team’s work is that it provides researchers interested in III-nitride VCSELs with a simple way to develop high-quality ITO intracavity contacts, which are a critical part of these types of VCSELs.

“While multilayer deposition techniques have been applied to many different material systems and different methods of growing/depositing materials, it was relatively unexplored in electron-beam deposition,” said Leonard. “Our work shows that using multilayer films yields significant and unexpected improvements in optoelectronic properties.”

While III-nitride VCSELs are still considered to be in their infancy, they “show great potential for many applications that require highly directional light with a high- output power density -- including heads-up displays, automotive headlights, visible light data transmission and communication, a.k.a. ‘LiFi,’ and pico projectors,” he said.

The surface roughness’s influence on VCSEL performance is particularly significant for short wavelength III-nitride VCSELs, Leonard pointed out, “because when the emission wavelength -- violet, UV, blue and green -- is divided by the refractive index, it takes on the same order as the surface roughness, which causes the light to scatter/interact with the surface roughness features in a much more intense way than infrared or red VCSELs.”

The team continues to make “dramatic improvements in the yield and efficiency of our VCSELs,” he added.

The authors of this study are affiliated with University of California, Santa Barbara.