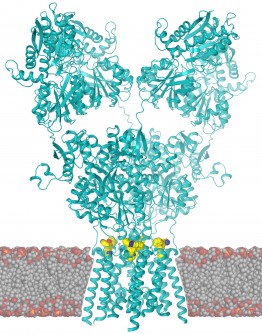 AMPA receptor (blue) is inactivated by antiepileptic drug Perampanel (yellow), which is wedged into binding sites on the upper edge of the cell membrane (gray and red). 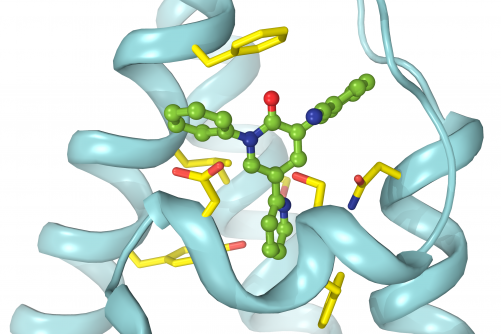 The findings were published today in Neuron.

The most commonly used anti-epilepsy drugs are ineffective for about 30 percent of people with seizure disorders.

A new direction in the treatment of epilepsy is aimed at inhibiting AMPA receptors, which help transmit electrical signals in the brain and play a key role in propagating seizures. Currently, perampanel is the only FDA-approved drug that targets AMPA receptors. But because perampanel is associated with significant side effects, its clinical use has been limited.

“The problem is that AMPA receptors are heavily involved in the central nervous system, so if you inhibit their function, you cause an array of unwanted effects,” said study leader Alexander I. Sobolevsky, PhD, professor of biochemistry and molecular biophysics at CUMC. “If we hope to design better drugs for epilepsy, we need to learn more about the structure and function of these receptors.”

In this study, Dr. Sobolevsky employed a technique called crystallography to determine how perampanel and two other inhibitors interact with the AMPA receptors to stop transmission of electrical signals. The study was conducted using rat AMPA receptors, which are almost identical to human receptors.

In the new study, the researchers were able to pinpoint exactly where the drugs bind to AMPA receptors.

“Our data suggest that the inhibitors wedge themselves into the AMPA receptor, which prevents the opening of a channel within the receptor,” said Dr. Sobolevsky. When that channel is closed, ions cannot pass into the cell to trigger an electrical signal.

According to the researchers, these findings may allow drug makers to develop medications that are highly selective for the AMPA receptors, which could be safer and more effective than currently available anti-epilepsy drugs.

The study was supported by grants from the National Institutes of Health (R01 NS083660), the Pew Scholar Award in Biomedical Sciences, the Schaefer Research Scholar Award, the Klingenstein Fellowship Award in the Neurosciences, and the Irma T. Hirschl Career Scientist Award.

The authors declare no conflicts of interest. 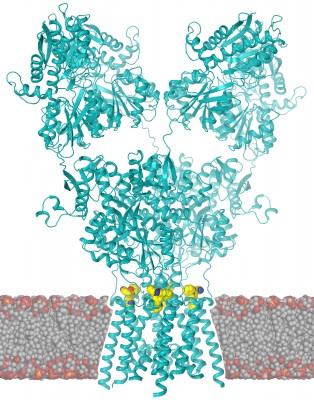 Caption: AMPA receptor (blue) is inactivated by antiepileptic drug Perampanel (yellow), which is wedged into binding sites on the upper edge of the cell membrane (gray and red). 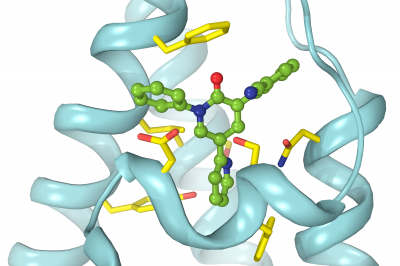