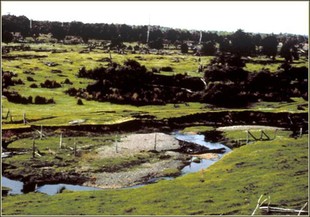 [Note: A multimedia version of this story is available on Exploration, Vanderbilt's online research magazine, at http://www.vanderbilt.edu/exploration/stories/monteverde.html]

Newswise — New evidence from the Monte Verde archaeological site in southern Chile confirms its status as the earliest known human settlement in the Americas and provides additional support for the theory that one early migration route followed the Pacific Coast more than 14,000 years ago.

The study was conducted by a team of anthropologists, geologists and botanists headed by Vanderbilt University's Distinguished Professor of Anthropology Tom Dillehay and reported in the May 9 issue of the journal Science.

The paper, which includes the first new data reported from the site in the last 10 years, includes the identification of nine species of seaweed and marine algae recovered from hearths and other areas in the ancient settlement. The seaweed samples were directly dated between 14,220 to 13,980 years ago, confirming that the upper layer of the site, labeled Monte Verde II, was occupied more than 1,000 years earlier than any other reliably dated human settlements in the Americas.

The Monte Verde site was discovered in 1976. It is located in a peat bog about 500 miles south of Santiago and has revealed well preserved ruins of a small settlement of 20 to 30 people living in a dozen huts along a small creek. A wide variety of food, including extinct species of llama and an elephant-like animal called a gomphothere, shellfish, vegetables and nuts have been found at the site.

In 1979, when Dillehay and his colleagues first reported that the radiocarbon dating of the bones and charcoal found at Monte Verde returned dates of more than 14,000 years before the present, it stirred up a major controversy because it appeared to conflict with archaeological evidence of the settlement of North America.

Since the turn of the century, the prevailing theory had been that human colonization began at the end of the last Ice Age about 13,000 years ago, when groups of big game hunters, called the Clovis culture, followed game herds from Siberia to Alaska over a land bridge across the Bering Strait and then gradually spread southward. None of the Clovis artifacts were dated earlier than 13,000 years ago. So having a substantially older human settlement in southern Chile was difficult to reconcile with this view. It wasn't until 1997 that the controversy was resolved by a prominent group of archaeologists who reviewed the evidence, visited the Monte Verde site and unanimously approved the dating.

Most scholars now believe that people first entered the new world through the Bering land bridge more than 16,000 years ago. After entering Alaska, it is not known whether they colonized the hemisphere by moving down the Pacific coast, by inland routes or both. The general view is that the early immigrants would have spread down the coast much faster than they could move inland because they could exploit familiar coastal resources more readily and get much of their food from the sea. However, evidence to support the coastal migration theory has been particularly hard to find because sea levels at the time were about 200 feet lower than today: As the sea level rose, it would have covered most of the early coastal settlements.

According to Dillehay, the new Monte Verde findings provide additional support for the coastal migration theory but, at the same time, raises the possibility that the process may have been considerably slower than currently envisioned.

At the time it was inhabited, Monte Verde was situated on a small tributary of a large river. It was about 400 feet above sea level and located more than 50 miles from the coast and about 10 miles from a large marine bay. Despite its inland location, the researchers identified a total of nine different species of seaweed and algae in the material collected at the site: material that the Monte Verdeans must have brought from the coast and the bay. The researchers have also found a variety of other beach or coastal resources, including flat beach pebbles, water plants from brackish estuaries and bitumen.

"Finding seaweed wasn't a surprise, but finding five new species in the abundance that we found them was a surprise," said Dillehay. "There are other coastal resources at the site. The Monte Verdeans were really like beachcombers: The number and frequency of these items suggests very frequent contact with the coast, as if they had a tradition of exploiting coastal resources."

In addition, the scientists have found a number of inland resources, such as llama and gomphothere meat, vegetables and nuts, in the ancient village. This suggests that the group was moving back and forth between different ecological zones, a process called transhumance.

"It takes time to adapt to these inland resources and then come back out to the coast. The other coastal sites that we have found also show inland contacts. If all the early American groups were following a similar pattern of moving back and forth between inland and coastal areas, then the peopling of the Americas may not have been the blitzkrieg movement to the south that people have presumed, but a much slower and more deliberate process," Dillehay observed.

Members of the research team included Carlos Remirez, Mario Pino and Daniela Pino-Navarro from the Universidad Austral de Chile; Michael B. Collins from the University of Texas, Austin; and Jack Rossen from Ithaca College.

The research was funded by the National Science Foundation, the Fondo Nacional de Desarrollo Cientifico y TecnolÃ³gica, the National Geographic Society and the Universidad de Chile.

Vanderbilt University is a private research university of approximately 6,500 undergraduates and 5,300 graduate and professional students. Founded in 1873, the University comprises 10 schools, a public policy institute, a distinguished medical center and The Freedom Forum First Amendment Center. Vanderbilt, ranked as one of the nation's top universities, offers undergraduate programs in the liberal arts and sciences, engineering, music, education and human development, and a full range of graduate and professional degrees.