New evidence of the Sahara's age 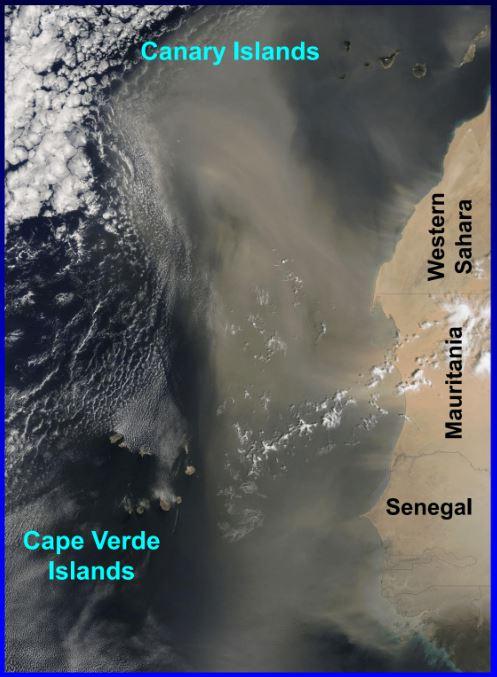 Desert dust from Africa is transported west to the Canary Islands and the CapeVerde Islands every year. Moderate Resolution Imaging Spectroradiometer (MODIS) image of "Calima" (dust storm) event on 8 March 2006, taken from the Terra satellite. 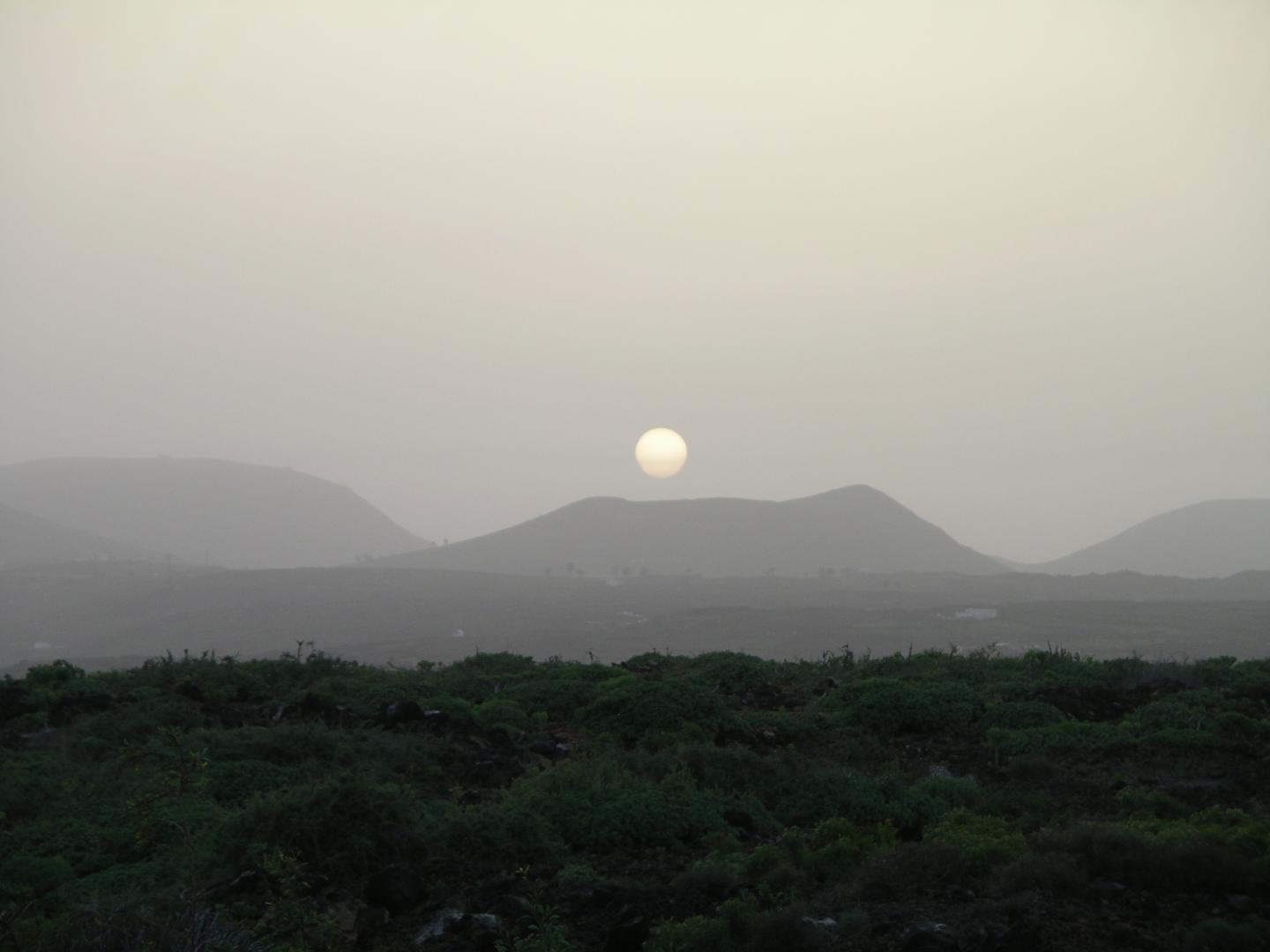 View from the ground on the Canary Islands on 8 March 2006, when the Calima arrived. 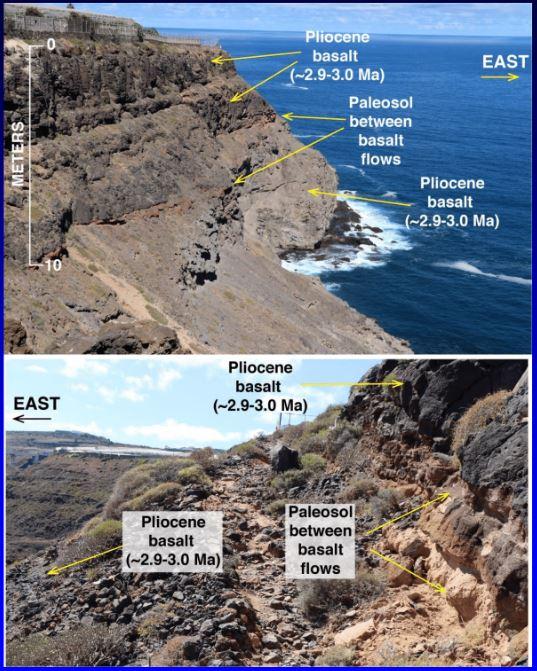 A paleosol on the island of Gran Canaria, sandwiched between basalt flows dated to 3.0-2.9 million years ago -- to the Pliocene.

Newswise — Boulder, Colo., USA: The Sahara Desert is vast, generously dusty, and surprisingly shy about its age. New research looking into what appears to be dust that the Sahara blew over to the Canary Islands is providing the first direct evidence from dry land that the age of the Sahara matches that found in deep-sea sediments: at least 4.6 million years old.

"People have been trying to figure it out for several decades," said Daniel Muhs, a geologist with the U.S. Geological Survey in Denver, Colorado. "More recent studies said it was the beginning of the Pleistocene (about 2.6 million years ago). Then others say a few thousand years ago." Added to this is a model suggesting the Sahara Desert first appeared as far back as seven million years ago.

There is also other evidence that the desert has taken breaks and had wetter, greener periods interspersed with arid times. It's this sensitivity to climate -- and the Sahara's role in global climate -- that makes the region so interesting to researchers.

The new work by Muhs and his colleagues in the Canary Islands focused on thick layers of fine reddish-brown soil found among layers of volcanic rocks and dune sands on Fuerteventura and Gran Canaria islands. The islands are off the west coast of North Africa, at the mouth of a spigot that seasonally pours windblown dust off of the Sahara and across the Atlantic Ocean. Muhs is presenting the results tomorrow at the annual meeting of the Geological Society of America in Phoenix, Arizona.

Muhs's and his colleagues' mission was to find, identify, and date any layers of ancient African dust in what are called paleosols, or buried, ancient soils. In one coastal location studied, they found layers of dunes made from local shells of sea animals; in another, there were layers of lava from the volcanoes that built the islands. Both of these geologic archives contained paleosols made of very fine-grained minerals rich in quartz and mica--minerals that do not reflect the local geology of the islands. They do, however, reflect the minerals found on the nearby African mainland.

Luckily for the geologists, the lava flows that sandwich the windblown fine-grained quartz and mica layers made it possible to nail down approximate ages of the Saharan dust. This is because volcanic rocks contain minerals with what are essentially isotopic clocks that start ticking when the minerals in the lava cool and solidify. And since the layers of lava, paleosols, and other local soils are stacked chronologically with the youngest on top, the lava flows provide some boundaries of when the Sahara was dry enough to launch massive dusty storms out over the Atlantic.

That's not to say the Sahara is 4.6-million-years-old. That's only as old as Muhs and his colleagues could determine based on the paleosols and lavas they found.

"We could take it further back in time if we can find the paleosols," Muhs said.

Muhs's presentation is entitled The Antiquity of the Sahara Desert: New Evidence From the Mineralogy and Geochemistry of Pliocene Paleosols on the Canary Islands, Spain (Paper No. 76-1; https://gsa.confex.com/gsa/2019AM/webprogram/Paper335207.html). It is scheduled for Monday, 23 Sept., at 8:05 am in Room 221AB, North Building of the Phoenix Convention Center. It is part of a session titled T2. Geomorphology and Climate Change in Hot Deserts.

The Geological Society of America, founded in 1888, is a scientific society with 22,000 members from academia, government, and industry in more than 100 countries. Through its meetings, publications, and programs, GSA enhances the professional growth of its members and promotes the geosciences in the service of humankind. Headquartered in Boulder, Colorado, GSA encourages cooperative research among earth, life, planetary, and social scientists, fosters public dialogue on geoscience issues, and supports all levels of earth-science education. www.geosociety.org

Caption: Desert dust from Africa is transported west to the Canary Islands and the CapeVerde Islands every year. Moderate Resolution Imaging Spectroradiometer (MODIS) image of "Calima" (dust storm) event on 8 March 2006, taken from the Terra satellite.

Caption: View from the ground on the Canary Islands on 8 March 2006, when the Calima arrived.

Caption: A paleosol on the island of Gran Canaria, sandwiched between basalt flows dated to 3.0-2.9 million years ago -- to the Pliocene.