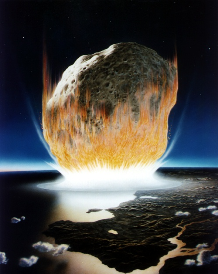 EMBARGOED FOR RELEASE: Tuesday, March 27, 2012, 5 p.m. Eastern TimeNote to journalists: Please report that this research was presented at a meeting of the American Chemical Society

A press conference on this topic will be held at 2 p.m. Eastern Time, March 27, 2012, in the ACS Press Center, Room 15A, in the San Diego Convention Center. Reporters can attend in person or access live audio and video of the event and ask questions at www.ustream.tv/channel/acslive.

Newswise — SAN DIEGO, March 27, 2012 — New research reported here today at the 243rd National Meeting & Exposition of the American Chemical Society (ACS) provides further support for the idea that comets bombarding Earth billions of years ago carried and deposited the key ingredients for life to spring up on the planet.

About 15,000 scientists and others are expected for the meeting of the ACS — the world’s largest scientific society. Being held this week, it includes more than 11,700 presentations on discoveries and advances in science.

Jennifer G. Blank, Ph.D., who led the research team, described experiments that recreated with powerful laboratory “guns” and computer models the conditions that existed inside comets when these celestial objects hit Earth’s atmosphere at almost 25,000 miles per hour and crashed down upon the surface. The research is part of a broader scientific effort to understand how amino acids and other ingredients for the first living things appeared on a planet that billions of years ago was barren and desolate. Amino acids make up proteins, which are the workhorses of all forms of life, ranging from microbes to people.

“Our research shows that the building blocks of life could, indeed, have remained intact despite the tremendous shock wave and other violent conditions in a comet impact,” Blank said. “Comets really would have been the ideal packages for delivering ingredients for the chemical evolution thought to have resulted in life. We like the comet delivery scenario because it includes all of the ingredients for life — amino acids, water and energy.”

Comets are chunks of frozen gases, water, ice, dust and rock that astronomers have termed “dirty snowballs.” These snowballs, however, may be 10 miles or more in diameter. Comets orbit the sun in a belt located far beyond the most distant planets in the solar system. Periodically, comets break loose and hurtle inward, where they may become visible in the sky.

Billions of years ago, however, swarms of comets and asteroids bombarded Earth with the remnants still visible as craters on the moon. Scientific evidence suggests that life on Earth began at the end of a period 3.8 billion years ago called the “late heavy bombardment” that involved both comets and asteroids. Before that, Earth was too hot for living things to survive. The earliest known fossils with evidence of life date from 3.5 billion years ago. So how could life originate so quickly when there was little evidence of water or the amino-acid building blocks for making proteins?

Blank and colleagues at the Bay Area Environmental Research Institute NASA/Ames Research Center, Moffett Field, Calif., set out to check whether amino acids could remain intact after a comet’s descent through Earth’s atmosphere. Previous analyses of comet dust samples returned to Earth by a NASA spacecraft eliminated any doubt that amino acids do occur in comets.

In one set of experiments, they used gas guns to simulate the enormous temperatures and powerful shock waves that amino acids in comets would experience on upon entering Earth’s atmosphere. The gas guns, devices that weigh thousands of pounds, hit objects with high-pressure blasts of gas moving at supersonic speeds. They shot the gas at capsules filled with amino acids, water and other materials.

The amino acids did not break down due to the heat and shock of the simulated crash. Indeed, they began forming the so-called “peptide bonds” that link amino acids together into proteins. The pressure from the impact of the crash apparently offset the intense heat and also supplied the energy needed to create the peptides, she explained. In other experiments, Blank’s team used sophisticated computer models to simulate conditions as comets collided with Earth.

Blank suggested that there may well have been multiple deliveries of seedlings of life through the years from comets, asteroids and meteorites.

AbstractCometary impacts may have delivered the building blocks of life to Earth, though the fate of organic compounds during these impacts remains largely uncertain. Here, we will discuss modeled pressure dependence and formation rates of the dimerization rates of amino acids using ab initio electronic structure calculations, semi-empirical quantum mechanical methods, and transition state theory. We also used reactive molecular dynamics calculations to simulate the breaking and forming of chemical bonds behind a shock front. We focused on three amino acids (Gly, Pro, Lys) with very different side chain structures. Our discussion will address the role of explicit, condensed phase (H2O) molecules in defining activation volumes and transition state energies and the role of pressure in inhibiting thermal breakdown of our initial materials. Model results will be compared with data from experimental ballistic impact studies and discussed in the context of prebiotic chemical evolution.