Newswise — (Washington, D.C.) November 17, 2017 – As stories of sexual harassment continue to grab headlines, the American University Game Lab decided to create a game that highlights how difficult it can be for women to speak out, while reflecting the power in numbers women hold when they do.

“Hurl the Harasser,” created by Game Lab director, Lindsay Grace, adjunct professor Maggie Farley and alumna Joyce Rice, is an experiential metaphor for the situation of women who have been subjected to sexual harassment.

“The metaphor is that it takes lots of people speaking up to tip the scales of justice against the harasser - particularly when the harasser is a high-profile professional like the cases we've seen of late,” Grace said.

Players are tasked with breaking women out of bubbles to tip the scales. But much like real life, the harasser makes winning the game anything but easy.

“The harasser can win by throwing up enough obstacles and doubt,” Farley added. “When the harasser says, ‘It was consensual,’ a toxic ray briefly paralyzes the women, but we wanted to show that there are ways for the underdogs to fight back together and overcome the harassment and obstacles.”

With victims of sexual harassment often shamed into silence or blamed for their harassment, Grace hopes the game gets people to think more critically about the undue power harassers tend to have and the hurdles victims have to jump to get justice.

“We really want people to think and reflect on the way our society works in this context,” Grace said. “It's somewhere between an empathy game and political satire.”

“Hurl the Harasser” was created in Miami at a “Newsjam,” a game-building experience that links journalism to multimedia. The “Newsjam” is part of a partnership between American University, the University of Miami through funding provided by the Knight Foundation.

“Hurl the Harasser” can be played here: http://hurl.persuasiveplay.org/.

About the Game Lab The American University Game Lab serves as a hub for experiential education, persuasive play research, and innovative production in the fields of games for change and purposeful play. 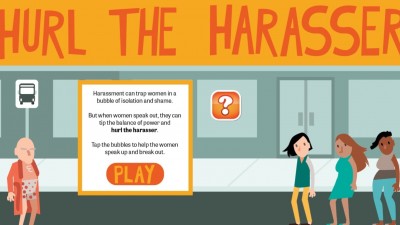 Caption: "Hurl the Harasser" invites users to help women break out of the bubble of sexual harassment. 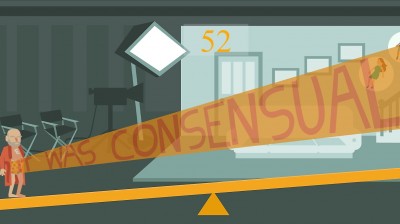