Digital Detection Tool Will Be Shared Freely Over the Web 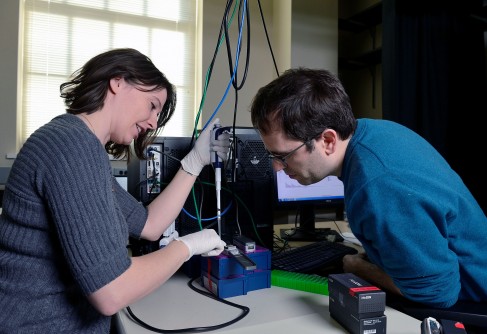 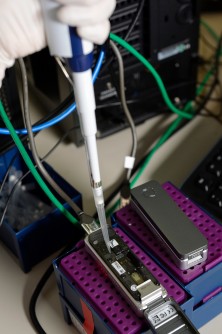 The researchers used this nanopore sequencing device and new software to find DNA methylation marks that have been linked to cancer and other illnesses. 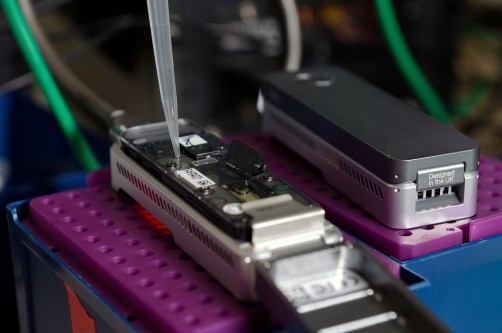 The researchers used this nanopore sequencing device and new software to find DNA methylation marks that have been linked to cancer and other illnesses.

Newswise — A research team from the United States and Canada has developed and successfully tested new computational software that determines whether a human DNA sample includes an epigenetic add-on linked to cancer and other adverse health conditions.

In the Feb. 20 issue of the journal Nature Methods, team members from Johns Hopkins University, the Ontario Institute for Cancer Research and the University of Toronto detailed their promising new method of detecting the presence of an extra mark on DNA called cytosine methylation.

Cytosine is one of the four main genetic building blocks, or nucleotides, that make up DNA. Methylation simply refers to the presence of a biochemical (methyl) group attached to a nucleotide, in this case cytosine. This altered version of cytosine can affect the way important genes are switched on or off. Such genetic miscues can play havoc with healthy activity within cells.

Examining these marks is important to researchers who are trying to pin down methylation’s precise role in various health problems. But current methods of mapping methylation each have stubborn shortcomings, such as harsh handling of the DNA sample and the need to use particularly large and pre-treated tissue samples.

The new software described in Nature Methods is used with a commercially available nanopore sequencing device. The authors say this technique will directly characterize DNA methylation from smaller tissue samples. “We show that with careful analysis of nanopore sequencing data we can extract this extra layer of information,” said lead author Jared T. Simpson, a principal investigator in the Informatics and Bio-computing Program at the Ontario Institute for Cancer Research and an assistant professor of computer science at the University of Toronto.

The international team’s software is designed to work with an Oxford Nanopore Technologies MinION sequencer, roughly the size of a large USB thumb drive. When this unit is used, DNA is pulled through 512 extremely small holes, as an electric current passes through. Distinctive changes in the current as the DNA moves through the hole allow the software to identify the sequence of the DNA, and now the methylation marks on the DNA as well.

In the Nature Methods paper, the researchers said they first used synthetically methylated DNA to “train” their software to distinguish between methylated cytosine and cytosine that lacks the crucial biochemical attachment.

“This technique can read long pieces of DNA and see changes in the extent of methylation in the sample,” said Winston Timp, an assistant professor of biomedical engineering at Johns Hopkins who supervised the research and was senior author of the journal article. “It let us look at how the changes in methylation appear on individual molecules as they pass through this pore.”

Such information is important, the researchers say, because faulty methylation is believed to play a role in birth defects and diseases such as rheumatoid arthritis, as well as cancer. “We already know,” Timp said, “that methylation changes show up early in the development of cancer.”

He said more information about DNA methylation could be helpful in devising new ways to detect cancer at an earlier stage and developing new treatments that are targeted more precisely to a patient’s genetic makeup.

To help advance such research, the team members have made their nanopore sequencing software for detecting DNA methylation available on a free open-source basis at https://github.com/jts/nanopolish.

“We’ve taken this line of research a critical step further ahead,” Timp said. “My hope is that others in this field will begin using the software right away.”

"Congratulations to team members from Johns Hopkins University, the Ontario Institute for Cancer Research and the University of Toronto on their new gene sequencing software and findings," said Reza Moridi, Ontario's minister of research, innovation and science. "These new insights into DNA methylation could help lead to new and innovative ways to detect and treat cancer."

Co-authors of the journal article were P.C. Zuzarte, Matel David and L. J. Dursi, all from the Ontario Institute for Cancer Research; and Rachael E. Workman of the Johns Hopkins’ Department of Biomedical Engineering, which is shared by the university’s Whiting School of Engineering and its School of Medicine.

Financial support for the research came from the Ontario Institute for Cancer Research, the Government of Ontario through the Ministry of Research, Innovation and Science and a Johns Hopkins University Catalyst Award.