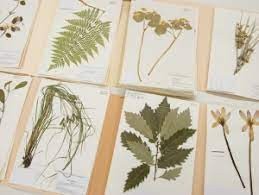 An image from the herbarium at Buffalo State.

Newswise — Buffalo State College’s Eckert Herbarium has a new home in the Science and Mathematics Complex.

Named for the late Theodore Eckert, a professor emeritus of biology, the herbarium is a collection of dried and preserved plant specimens. It houses multiple samples from the Western New York region, some dating back to the 1860s.

Eckert, who retired from Buffalo State in the mid-1970s, was the first curator of the herbarium, and his specimens make up the base of the collection, said Daniel L. Potts, professor and chair of the Biology Department. “Eckert was instrumental in helping to organize and formalize the collection,” he said.

About 16,000 species of vascular plants are contained in the collection, Potts said. Most of the species have been collected from the eastern Great Lakes, the Niagara Frontier, and southern Ontario, but some have come from as far as Florida or Quebec. Vascular plants are found on land and have woody tissues for conducting water and minerals, while non-vascular plants, found mostly in damp and moist areas, do not.

“The collection represents a substantial fraction of the biodiversity of vascular plants in the region,” Potts said. “It includes specimens that were collected here in Western New York by some of the first students at Buffalo State College, going all the way back to the late nineteenth century. In that way, it’s a historical collection, a record of the plant diversity of the region.”

The new space in SAMC 245 contains special metal cabinets that seal tightly to prevent moisture or insect damage to the specimens, and new microscopy, among other enhancements, Potts said.

“The new facility is really exciting,” he said. “It represents an important investment in the resource to have a dedicated, secure facility. It helps us organize the space and curate the collection. It also provides space for students and scientists, or anyone else who’s interested, to access and examine the collection using microscopy or other tools.”

The herbarium also houses the Dr. James D. Haynes Mycological Collection. Mycology is the study of fungi. Haynes, a SUNY Distinguished Teaching Professor of Biology, was an expert on mushrooms and other fungi and the author of several published papers on the subject. He was active in many educational exhibits and programs at the Buffalo Museum of Science, lecturing, and teaching field mycology. The Haynes collection contains over 1,600 species of fungi from New York State.

The James Battaglia Lichen Collection is also catalogued in the herbarium. Lichens are organisms consisting of algae and fungi that grow on rocks and trees.

Battaglia, a research associate at Buffalo State, first worked in the herbarium at the Buffalo Museum of Science. An amateur botanist and retired English teacher in the Williamsville School District, he has been a member of the Niagara Frontier Botanical Society for many years. He became involved with the Eckert Herbarium at Buffalo State in 2006, when Javier Peñalosa, a plant ecologist and associate professor emeritus of biology who retired in 2007, enlisted his help in organizing and restoring the collection.

“I had a couple of goals,” Battaglia said. “I reorganized it, updated the names—because names go obsolete in taxonomic science—and I tried to expand it. It’s the largest unknown collection on Buffalo State’s campus,” he quipped.

The collection has grown under Battaglia’s guidance. In 2010, the herbarium was selected to house a collection from the Lake Erie Coast Project, a survey of the Canadian shore of Lake Erie from Fort Erie to the Grand River. In recent years, Battaglia acquired a collection dating back to 1869 created by George Hutchins Thomas, a student at Massachusetts Agricultural College (now the University of Massachusetts Amherst).

The collection has also received specimens from members of the Niagara Frontier Botanical Society and a bequest from Niagara University. Some members who have visited Florida or the Southwest have contributed specimens from those areas, as well.

The collected species are pressed and dried flat between heavy water paper, Potts said. After that, they’re mounted on an herbarium sheet, which is similar to archival, acid-free paper. Lightweight species are glued to the paper, while heavier species are sewn down. The specimens have handwritten descriptive labels attached to them. It’s all done carefully and artfully.

“The historical samples also have this really interesting sort of craft art aesthetic to them,” Potts said, “because you see the spidery, old faded-in ink writing from the nineteenth century. You see the stitching work of someone who is very accomplished with a threaded needle.”

The herbarium provides a hands-on teaching resource for biology students, Potts said. Along with teaching biodiversity in the area, it also allows students to tackle some of the biggest and most fundamental questions in biology. For instance, students can explore the relationship between biological form and function.

“When you have an herbarium, you can pull lots and lots of different types and many species representing a diversity of life forms, growth habits, floral morphologies, or leaf shapes,” he said. “You can lay them all out, so students can see a spectrum of biological form and relate that to function in one place, and at one time.”

All the species in the herbarium include data on when and where they were collected, Potts said. Based on that information, students can work on questions around why certain plants are found only in certain areas or at certain times.

“It’s a deceptively simple question, but a fundamental one in biology,” he said. “It allows us to look at spatial and temporal distributions of species through the growing season, or over the decades. For example, if you find a specimen that was collected in June of 1971, and that specimen has a flower on it, that potentially provides us historical context for how that species is adjusting flowering times in response to recent climate change. So, we have some records of plant behavior and phenology, seasonal activity, that are preserved in the herbarium as well.”

The herbarium offers students the chance to learn from more than just looking in a textbook, Potts said.

“It is an interesting record of not just the plants, but also the people that were involved in the research in the past, and a very intimate look at their research,” he said. “It’s not just a notebook, but actually their handicraft, which I think is always so cool.”

Battaglia said the herbarium is an asset to the entire region, not just the campus. He sees its usefulness to a variety of disciplines, from the sciences to the arts.

Art and Design students have in fact used the herbarium for inspiration and worked with the Fashion and Textile Technology Department to put on a fashion show, he said, “an exciting collaboration between art and science.”

While COVID-19 has limited the time Battaglia has been able to spend at the herbarium, he’s looking forward to helping it continue to grow. “We’re ready to have a more expanded role locally and on campus,” he said.