Newswise — The 10 year anniversary of the Fukushima Daiichi nuclear accident occurs in March. Work just published in the Journal 'Science of the Total Environment' documents new, large (> 300 micrometers), highly radioactive particles that were released from one of the damaged Fukushima reactors.

Particles containing radioactive cesium (134+137Cs) were released from the damaged reactors at the Fukushima Daiichi Nuclear Power Plant (FDNPP) during the 2011 nuclear disaster. Small (micrometer-sized) particles (known as CsMPs) were widely distributed, reaching as far as Tokyo. CsMPs have been the subject of many studies in recent years. However, it recently became apparent that larger (>300 micrometers) Cs-containing particles, with much higher levels of activity (~ 105 Bq), were also released from reactor unit 1 that suffered a hydrogen explosion. These particles were deposited within a narrow zone that stretches ~8 km north-northwest of the reactor site. To date, little is known about the composition of these larger particles and their potential environmental and human health impacts.

Now, work just published in the journal Science of the Total Environment characterizes these larger particles at the atomic-scale and reports high levels of activity that exceed 105 Bq.

The particles, reported in the study, were found during a survey of surface soils 3.9 km north-northwest of reactor unit 1 (Fig. 1).

From 31 Cs-particles collected during the sampling campaign, two have given the highest ever particle-associated 134+137Cs activities for materials emitted from the FDNPP (specifically: 6.1 × 105 and 2.5 × 106 Bq, respectively, for the particles, after decay-correction to the date of the FDNPP accident).

The study involved scientists from Japan, Finland, France, the UK, and USA, and was led by Dr. Satoshi Utsunomiya and graduate student Kazuya Morooka (Department of Chemistry, Kyushu University). The team used a combination of advanced analytical techniques (synchrotron-based nano-focus X-ray analysis, secondary ion mass spectrometry, and high-resolution transmission electron microscopy) to fully characterize the particles. The particle with a 134+137Cs activity of 6.1 × 105 Bq was found to be an aggregate of smaller, flakey silicate nanoparticles, which had a glass like structure. This particle likely came from reactor building materials, which were damaged during the Unit 1 hydrogen explosion; then, as the particle formed, it likely adsorbed Cs that had had been volatized from the reactor fuel. The 134+137Cs activity of the other particle exceeded 106 Bq. This particle had a glassy carbon core and a surface that was embedded with other micro-particles, which included a Pb-Sn alloy, fibrous Al-silicate, Ca-carbonate / hydroxide, and quartz (Fig. 2).

The composition of the surface embedded micro-particles likely reflect the composition of airborne particles within the reactor building at the moment of the hydrogen explosion, thus providing a forensic window into the events of March 11th 2011 (Fig. 3). Utsunomiya added, "The new particles from regions close to the damaged reactor provide valuable forensic clues. They give snap-shots of the atmospheric conditions in the reactor building at the time of the hydrogen explosion, and of the physio-chemical phenomena that occurred during reactor meltdown." He continued, "whilst nearly ten years have passed since the accident, the importance of scientific insights has never been more critical. Clean-up and repatriation of residents continues and a thorough understanding of the contamination forms and their distribution is important for risk assessment and public trust.

Given the high radioactivity associated with the new particles, the project team were also interested in understanding their potential health / dose impacts.

Dr Utsunomiya stated, "Owing to their large size, the health effects of the new particles are likely limited to external radiation hazards during static contact with skin. As such, despite the very high level of activity, we expect that the particles would have negligible health impacts for humans as they would not easily adhere to the skin. However, we do need to consider possible effects on the other living creatures such as filter feeders in habitats surrounding Fukushima Daiichi. Even though ten years have nearly passed, the half-life of 137Cs is ~30 years. So, the activity in the newly found highly radioactive particles has not yet decayed significantly. As such, they will remain in the environment for many decades to come, and this type of particle could occasionally still be found in radiation hot spots."

Professor Rod Ewing (co-author from Stanford University) stated "this paper is part of a series of publications that provide a detailed picture of the material emitted during the Fukushima Daiichi reactor meltdowns. This is exactly the type of work required for remediation and an understanding of long-term health effects".

Professor Bernd Grambow (co-author from IMT Atlantique) added "the present work, using cutting-edge analytical tools, gives only a very small insight in the very large diversity of particles released during the nuclear accident, much more work is necessary to get a realistic picture of the highly heterogeneous environmental and health impact". 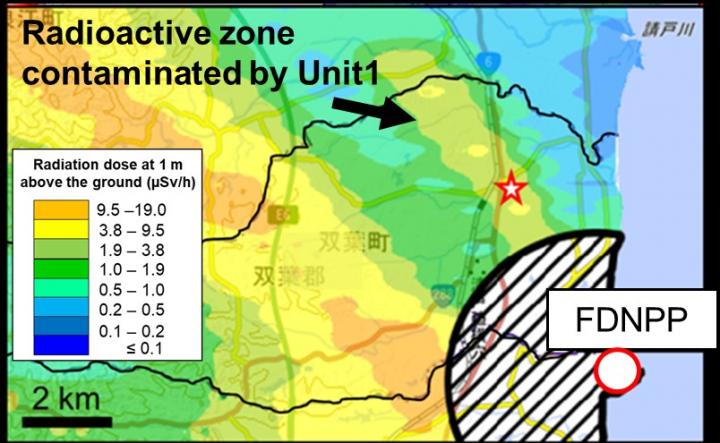 Caption: A map showing the location of the Fukushima Daiichi Nuclear Power Plant (FDNPP) and the sampling site against the radiation dose at 1 m above the ground as of November, 2017. The red star represents the location of the soil sample containing the highly radioactive particles.

Caption: Back-scattered electron (BSE) image of the cross section of the most radioactive particle (FTB26) accompanied by elemental maps of its major constituents. 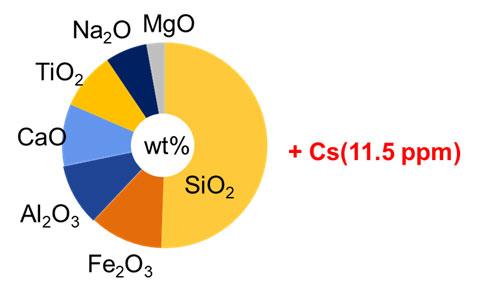 Caption: A pie diagram presenting the main average composition of the airborne microparticles embedded in the surface of carbon core.